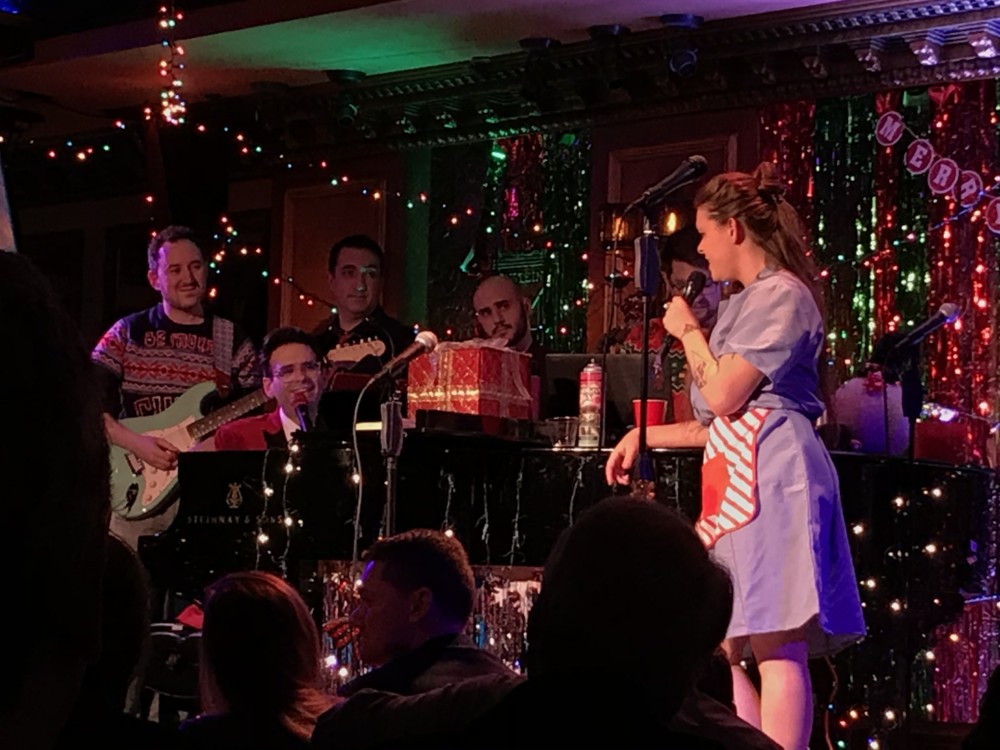 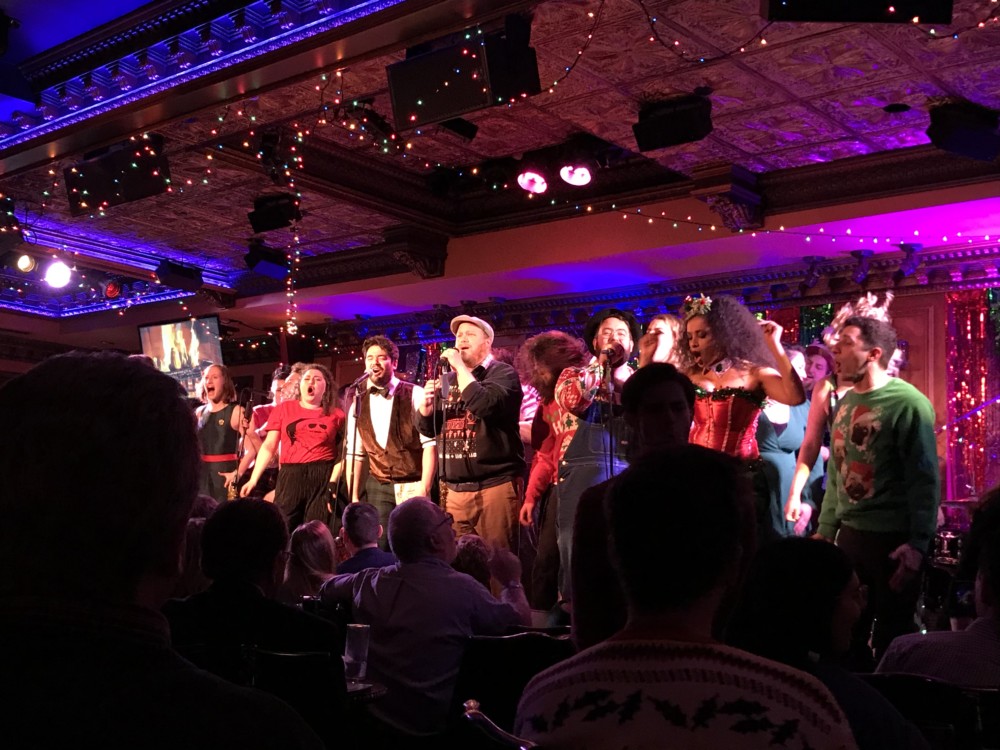 New York City is home to a number of beloved Christmas traditions: the Rockefeller Center tree, the Rockettes, the decked-out shop windows. But Feinstein’s/54 Below is home to a few additional Christmas traditions: a visit back in time to a place called Jackelope Holler, multiple long-lost parent-child reunions, an extremely intoxicated Mrs. Claus stumbling about the stage. Last weekend, The 12th Annual Joe Iconis Christmas Extravaganza brought its whimsically weird, festively fun holiday cheer back for six performances.

Written and created by Joe Iconis (Tony Award nominee; Larson Award winner; creator of Be More Chill, Broadway Bounty Hunter, Love in Hate Nation), directed by John Simpkins, and produced by Jennifer Ashley Tepper, the Christmas Extravaganza is nothing short of a spectacle – a shiny, chocolate-dipped spectacle covered in tinsel. There are over 50 cast members (some of whom vary depending by performance), tacky-in-a-perfect-way decorations adorning every surface throughout the entire venue (including the bathroom), and pre-performance Christmas carolers visiting guests at their tables. After Iconis takes to the piano for an introductory “Christmas Extravaganza Theme Song,” the entire cast fills the stage, the spaces between tables, and the bar area to kick things off with Dolly Parton’s “With Bells On,” which perfectly sets the tone for an energetic and joyous evening. The audience runs the gamut from old to young (some teenagers at the foot of the stage wore Be More Chill Christmas sweaters and dressed in outfits inspired by their favorite Be More Chill characters), but everyone is there to celebrate the season with Iconis and his friends. 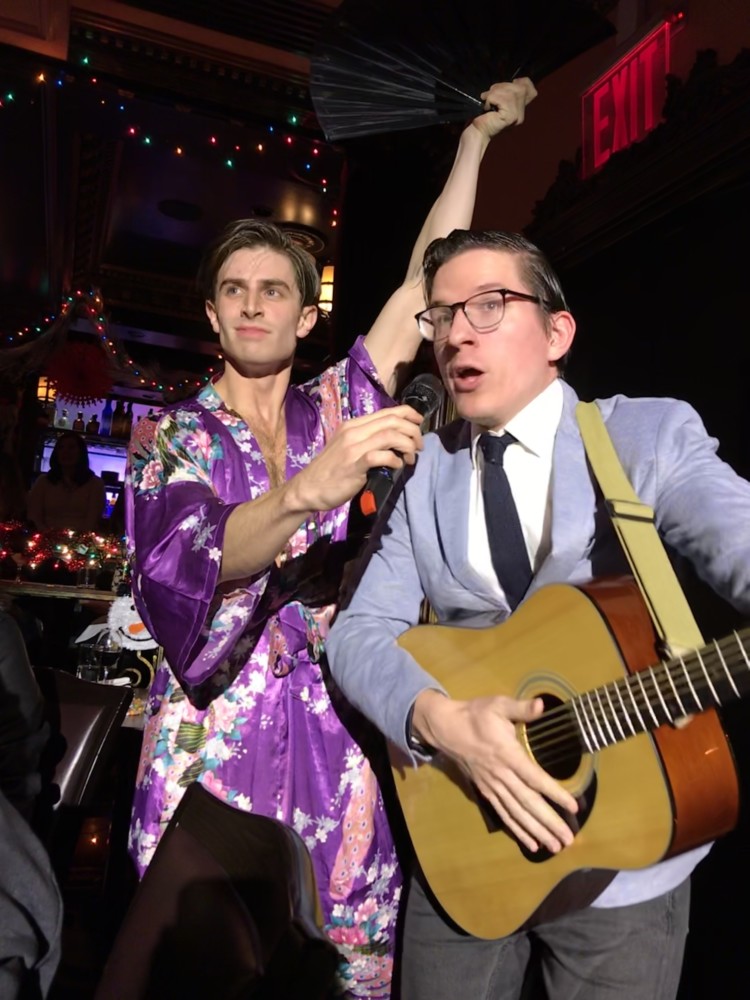 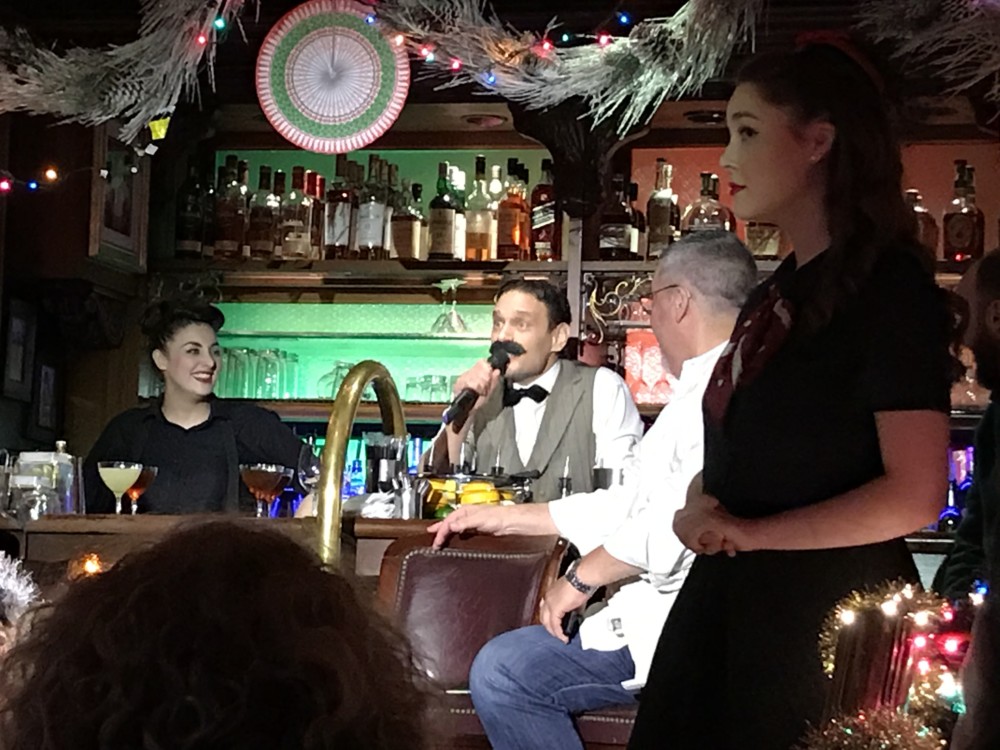 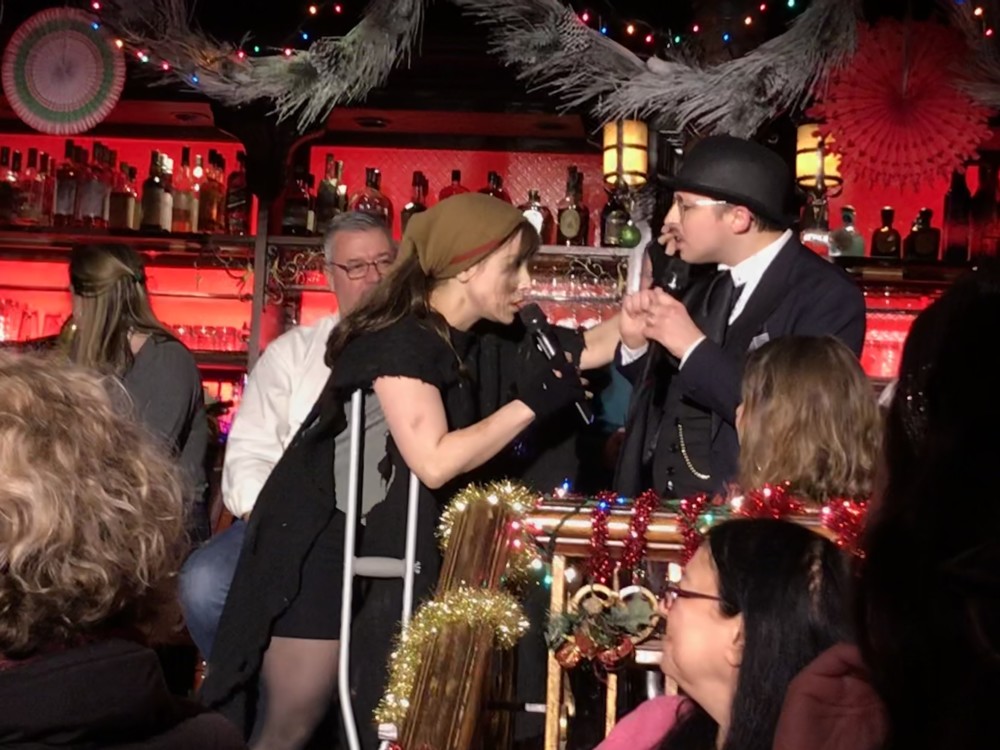 If you’ve never seen The Joe Iconis Christmas Extravaganza, it is a seemingly lawless little pine-scented world of its own. Expect not only jolly music and a talented cast, but full plotlines with conflicts, resolutions, and even character arcs. We watch a 25-minute sequence starring Flashback Joe Iconis (Philip Jackson Smith) and a band of woodland creatures that ends with Flashback Iconis accidentally electrocuting everyone he loves. We meet Cyril von Miserthorpe (Will Roland), a villain in a bowler hat who turned evil after the love of his life was run over by a car. We witness three orphans (Lauren Marcus, Harrison Chad, Max Crumm) take shelter from the cold on the 54 Below stage. Marcus eats paper, attempts to seduce Roland in a rendition of “Baby, It’s Cold Outside,” and then finds out he is her long-lost dad. A giant chestnut man, aptly named Mr. Chestnut (Kevin Michael Murphy), leads the cast in a medley of traditional Christmas songs. Throughout the show, Iconis and gang are trying to make a depressed Santa Claus feel better because he’s lost his Christmas spirit. There are no rules here, and it is absolutely delightful. I think my mother’s reaction perfectly sums up everyone’s thoughts the first time they witness this show: she turns to me mid-song, beaming ear-to-ear, and says, “What the heck?”

The most noteworthy aspects of this show are the music and the truly bizarre cast of characters. Standout musical performances include Iconis and Kelly McIntyre singing The Pogues’ “Fairytale of New York,” a number which involves the whole room when we are encouraged to raise our drinks and wave them around. Katrina Rose Dideriksen’s incredibly powerful voice brings the house down when she performs “Please Come Home For Christmas.” We are treated to a rock-n-roll original Iconis Christmas song, “Celebrate Christmas (With Me)” and the whole cast joins Jason SweetTooth Williams for another Iconis original, “The Goodbye Song.” 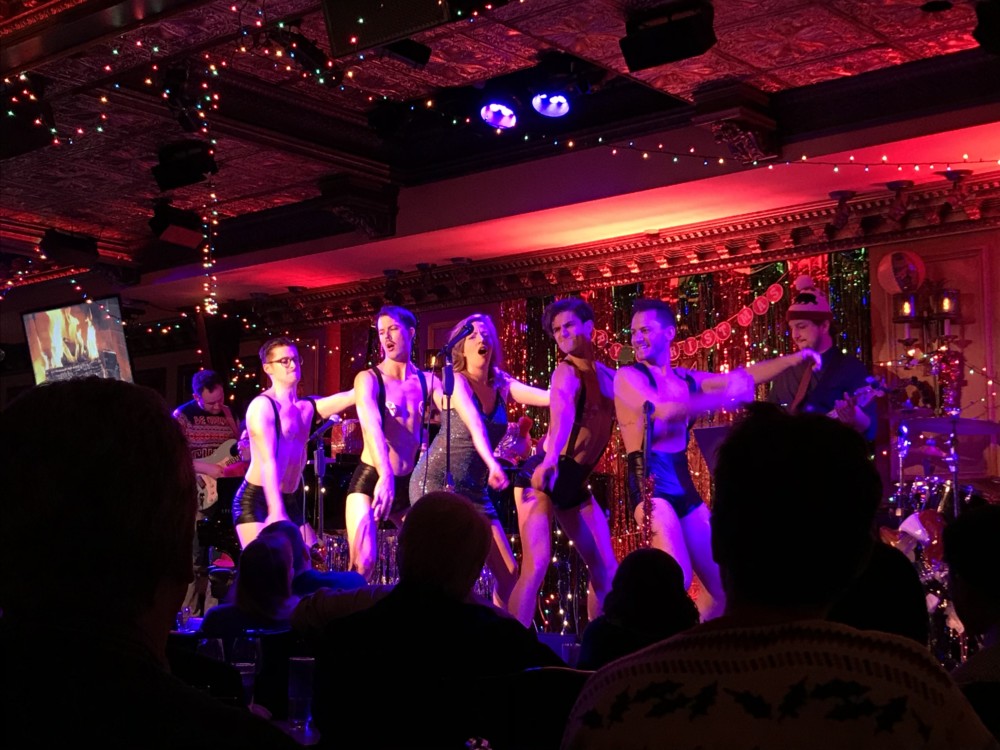 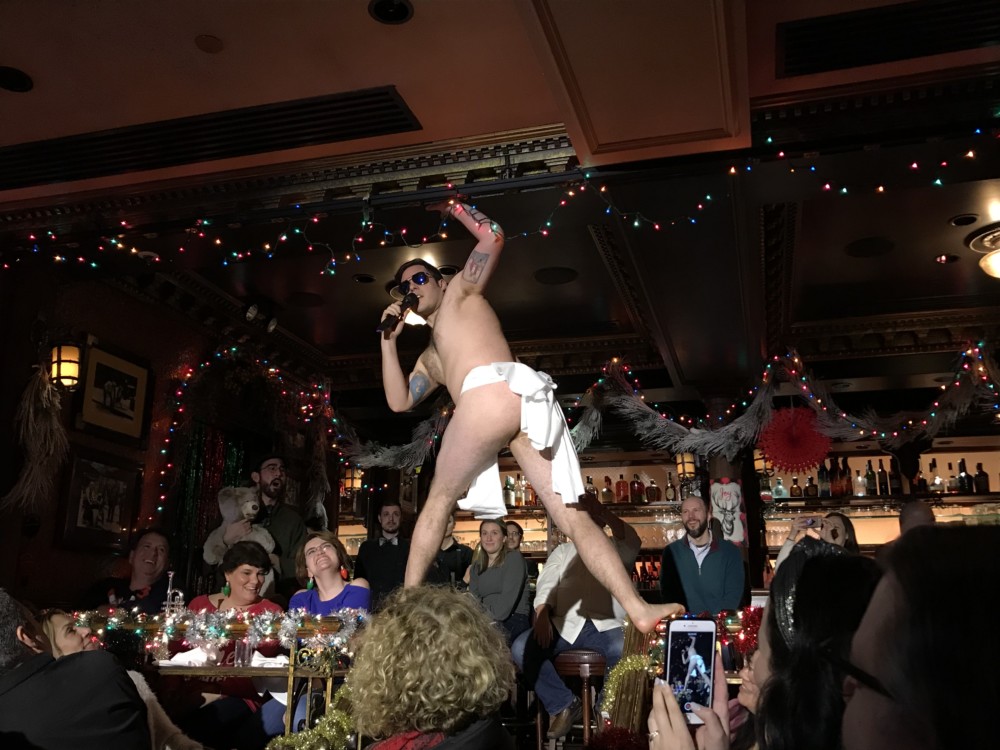 As for characters, we see pregnant lesbian elves, the Krampus, a Swedish vlogger. Sweet Baby Jesus (Bill Coyne) is a crowd favorite. Donning a loincloth diaper, some cool shades, and a bad attitude, Sweet Baby J has a bro-y personality and a beef with Santa left over from their school days. Old-timey bar keep Mr. Maccabee (Eric William Morris) pops up throughout the evening and even shows off his sexy “Here Comes Santa Claus” dance moves. Iconis’ Long Island aunt (Danielle Gimbal) and uncle (Gerard Canonico) guide us through a hysterical tour of “Christmas Around The World,” boxed wine and Islanders windbreaker in tow. And the Virgin Mary (Liz Lark Brown) steals the show with her quips (“I did all of the work with none of the fun – you Catholics know what I mean”) and her knockout “Santa Baby” performance, complete with backup dancers in leather suspenders and candy cane pasties.