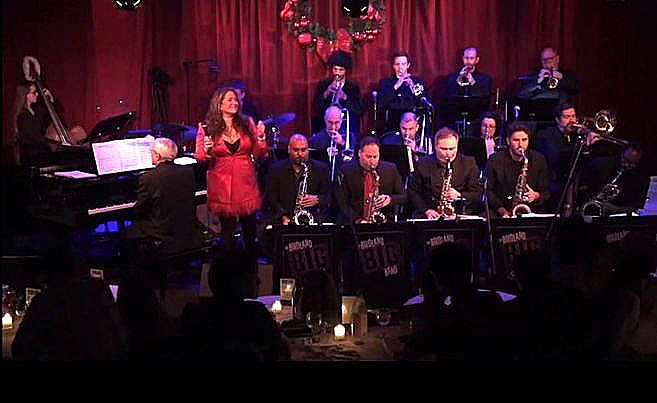 This writer has reviewed or simply attended hundreds of shows by dozens of artists who have graced the Birdland stage over the years. With so many great names to choose from, it is easy to miss the diamond hiding in plain sight. At Birdland, that diamond is the eponymous Birdland Big Band, and with just three nights left to the year 2022, Theater Pizzazz enjoyed a marvelous set by this fabulous house band.

The band, founded in 2006, is currently under the direction of saxophonist David DeJesus. It has fairly standard big band sections, with four trumpets, four trombones, five reeds (two tenors, two altos and one baritone), and a rhythm section of piano, drums and bass. The personnel included several prominent players, notably pianist Kenny Ascher, tenor saxophonist Sam Dillon, and the trumpeter Wayne Tucker. The band was dressed almost uniformly in black on black, with only DeJesus’s red tie providing a spot of color.

For this five-night, eleven-show residency, the band was joined for a number of songs by Nicole Zuraitis, a spectacular, Grammy-nominated singer, pianist and songwriter whom we reviewed previously over a year ago (see here).

The band opened strong with a brisk “Step Right Up” by Oliver Nelson (most associated with the Count Basie recording). There were sizzling solos by tenor sax whiz Sam Dillon (whom we reviewed here in 2021), DeJesus on alto and trumpeter Wayne Tucker.

The band played a bouncy swing of “Walkin’ About,” a Thad Jones composition. The trumpet section led the action at first, before DeJesus showed his considerable chops with another outstanding solo. The reed section provided handclaps on one section, and then took it home.

Neal Hefti’s drum-heavy instrumental “Cute” is most associated with Count Basie, but also with drummer Buddy Rich. Here, drummer Chris Smith, who opened the tune entirely solo for about two minutes, seems to have borrowed a modified version of Rich’s famous bit where he would play quite fast and then slow to a crawl, before returning to a whirlwind pace. Once the familiar melody kicked in, the harmonies were quite tight.

With the audience sufficiently primed, Nicole Zuraitis came up, dazzling in a shocking-pink blazer dress over a black camisole. Nicole is a gifted pianist, but with legendary jazz pianist and composer Kenny Ascher on board, Nicole’s formidable skills at the keys were left for another night. (If Ascher’s name is somehow unfamiliar to you, it’s unlikely you’ve never heard of the song he composed for The Muppet Movie, “The Rainbow Connection.”)

Nicole’s first song was Cole Porter’s “Too Darn Hot.” Wayne Tucker’s muted trumpet gave his fills something of a Harry “Sweets” Edison feeling and, overall, the hotness was just about right.

The band based their chart of “We’ll Be Together Again” on a Diane Schuur arrangement that seemed particularly well suited to Nicole’s style. It was performed in a ballad swing tempo similar to Sinatra’s famous 1956 recording with Nelson Riddle, with the sax section playing low, smoky notes. This number was one of the biggest highlights of the set.

The Birdland Big Band has an abundance of outstanding arrangers among its personnel, notably trombonist Mark Miller, who wrote several of the band’s best charts, including a hot one for the Tin Pan Alley standard “Close Your Eyes” (Bernice Petkere). Here, Nicole started out Sheila Jordan style, with just Catherine Michetti on bass (with a Santa hat over the scroll), before just piano and drums came in for a trio arrangement. Eventually, the full band came in, ultimately reaching a brilliant climax.

Ms. Zuraitis left the stage while the band played several more numbers, including a marvelous “Sail Away” (Tom Harrell) with another Mark Miller arrangement, with a gorgeous turn on flugelhorn by Alexander Pope Norris. The Chick Corea tune “Spain” had an “epic” chart by Mark Miller. It commenced with a solemn snare march by Chris Smith, with the altos now on flute. The complex piece weaved through multiple styles as the band took an aural journey through Spain. A blazing solo by Mr. Pope solo was but one highlight of the arrangement.

Nicole returned for a couple more songs, including her best of the night, “Long Meadow Vine,” a Nicole Zuraitis original, which included a verse. Here, the star was quite playful, improvising and throwing in little asides. The band closed out the set with the big band classic “Avalon.”

The Birdland Big Band plays regularly at the club, and is a must-see for any fan of the genre.

This performance of The Birdland Big Band took place on December 29 at Birdland Jazz (315 West 46th Street, between Eighth and Ninth Avenues). www.birdlandjazz.com