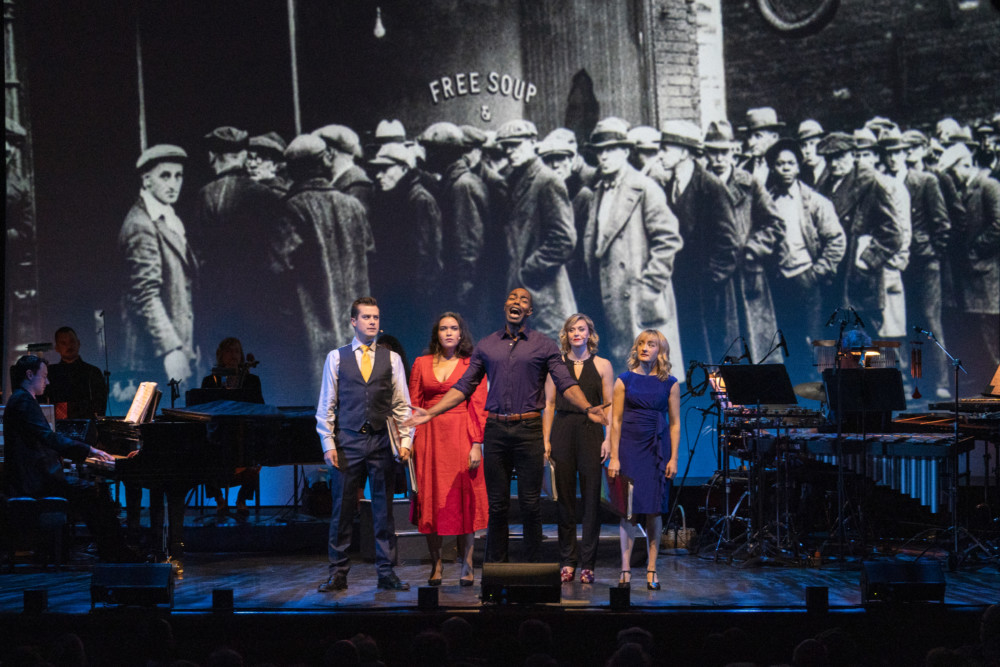 There is a photo in the 92Y Program for the opening of the Lyrics & Lyricists 2020 season that shows Yip Harburg being interviewed by Maurice Levine on December 13, 1970. This was the very first “L&L” talk that began this iconic series that continues to this very day. So it’s a fitting tribute that on the weekend of January 25-27, 2020, the concert was about this legendary lyricist and called Yip Harburg: Follow the Fellow Who Follows a Dream.

Edgar Yipsel “Yip” Harburg was born Isidor Hochberg on April 8, 1896, and died March 5, 1981. He was an extraordinarily versatile lyricist who wrote over 600 songs and worked with 44 different collaborators. Yip was known for the social commentary of his lyrics as well as his liberal sensibilities. He championed racial and gender equality along with union politics, and this concert explored these themes and more. The five stellar vocalists— Mikaela Bennett, Laura Darrell, Clifton Duncan, Megan Sikora, and Nick Spangler— acted as hosts as they read from the informative script (well written by Jon Marans with exceptional direction by Matt Kunkel). The remarkable band was led by Music Director & Orchestrator Paul Masse, with Steve Lyon on woodwinds, Kiku Enomoto on violin and viola, Laura Bontrager on cello, Lynette Wardle on harp, and Kory Grossman on percussion. 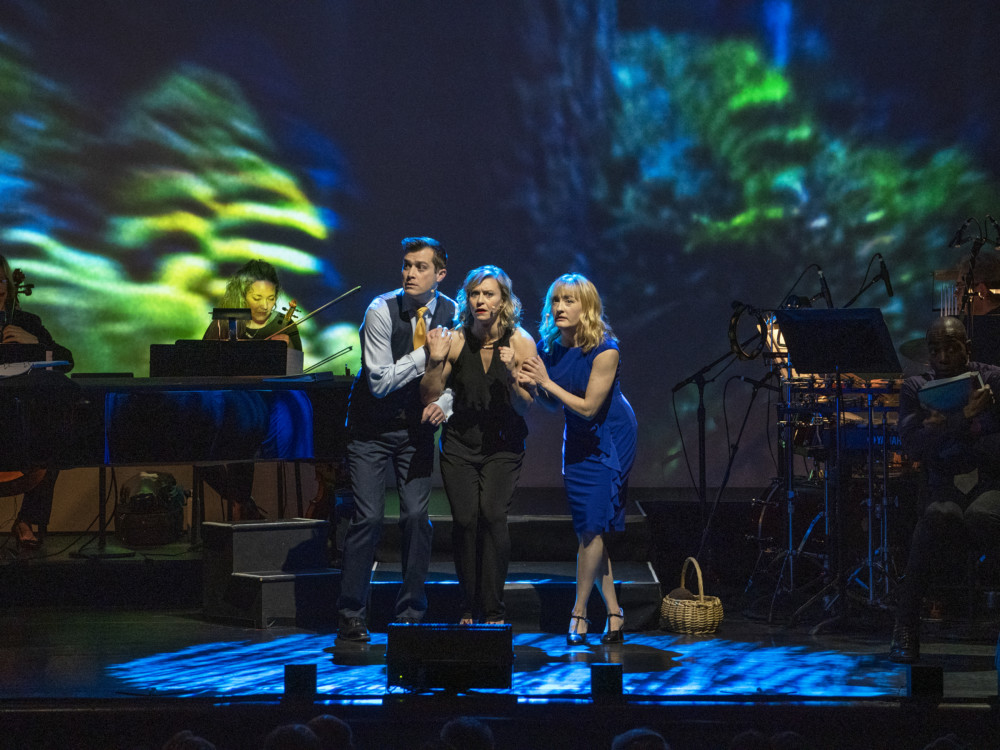 “That Great Come-a-Get-It Day” (Finian’s Rainbow, 1947), sung by the company, was a great opener and set the tone for the exploration of Yip’s often optimistic lyrics. A slide of the marquee for the 1939 musical Hooray For What! at the Winter Garden was shown in the background for two songs from that show, both written with Harold Arlen. “Down With Love”, nicely performed by Laura, and the obscure and clever “Napoleon’s a Pastry” sung by Megan. The staging and singing of “Brother, Can You Spare a Dime?” (music by Jay Gorney) with Clifton and Company was very effective as they took parts and read how this 1932 depression era song became an anthem for that difficult time. Yip had gone into business and was successful until the crash, when he found himself $50,000 in debt. It was then that he went back to songwriting— his true calling.

Mikaela really scored with a terrific rendition of “Happiness is a Thing Called Joe” (Harold Arlen) from the 1943 film of Cabin in the Sky that featured an all black cast. The first act closed with selections from his masterpiece, the 1939 film The Wizard of Oz, that displayed his remarkable rhyming skills as well as the genius of the classic and idealistic “Over The Rainbow.”

The second act opened with Laura singing “It’s Only a Paper Moon”— with incredible lyrics that Yip wrote with Billy Rose— and music by Harold Arlen from The Great Magoo 1932. “It’s a Barnum and Bailey world, just a phony as it can be” with the theme of a world that Yip wanted it to be )and not how cynical it often was). 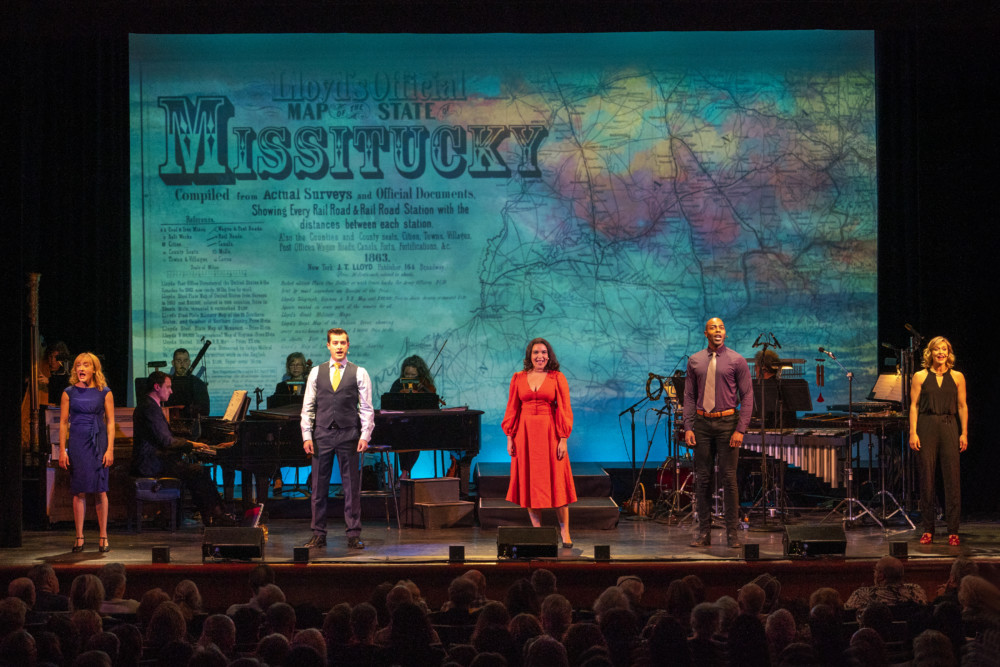 Probably a first for “L&L” was Clifton & Nick singing an affectionate two-man love duet “Let’s Take a Walk Around the Block” with lyrics by his friend Ira Gershwin from Life Begins a 8:40, a 1934 revue. Megan performed the ingenious “Lydia, The Tattooed Lady” written with Harold Arlen for the 1939 Marx Brothers film At The Circus. Clifton scored with the “Right as the Rain” from Bloomer Girl 1944 with Arlen’s gorgeous melody.

In 1947 Yip and Burton Lane wrote the splendid score for the Finian’s Rainbow, and three songs from that hit musical closed the show. Laura’s “How Are Things in Glocca Morra?” was beautifully sung and the company performed “If This Isn’t Love” with inventive staging. It was mentioned that there are at least 20 references to rainbows in Yip’s songs, so it was fitting that the cast sang one of Yip’s most hopeful songs to close “Look To The Rainbow.”

Much praise goes to the performers and production team that put this impressive show highlighting that Yip Harburg’s genius will never go out of style and is timeless.

Next in the series:

George Gershwin: You’ve Got What Gets Me