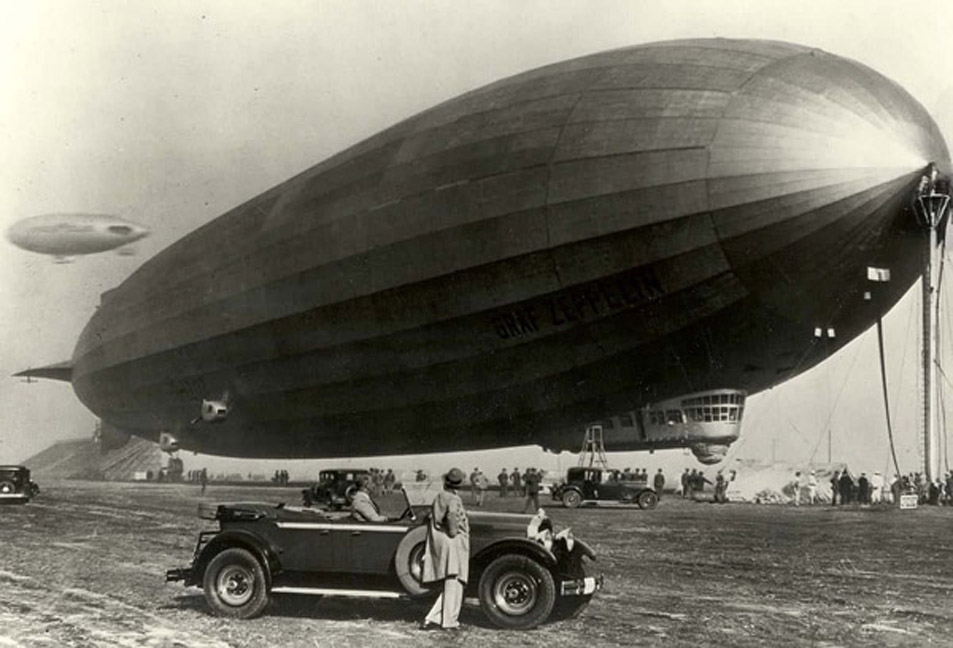 Far from a headline out of Jules Verne, the New York Times announcement above referred to an actual around the world flight of the world’s most successful commercial airship, built in Germany and named for Ferdinand Graf Von Zeppelin. Funding came from the German government, public subscription, and the support of William Randolph Hearst to the tune of at least $100,000 ($1,561,719.30 today)

Airships had been around since 1900, initially used as luxurious passenger vehicles and then bombers during WWI. The United States and Britain built them, France and Germany flew confiscated ones. In 1925, when the Allies relaxed treaty restrictions, Germany once again manufactured the airships and started intercontinental passenger service. July 1928, Countess Helga von Brandenstein-Zeppelin smashed a bottle of champagne across the bow of the Graf. It would be helmed by Dr. Hugo Eckener who had been with the Zeppelin company for some time.

Over the course of eight years before the spectacular explosion of The Hindenburg when the Graf was withdrawn from service and eventually scrapped for military aircraft, this hydrogen-filled, rigid airship made 590 regular transatlantic flights operated by a crew of 36, carrying 24 passengers. It was 776 feet long (10 stories high and more than two city blocks long), its outer skin made of heavy-duty cotton, stretched taut, then covered by 6 layers of silver paint ostensibly to reduce heat inflation of the hydrogen.

A 98 ½’ x 20’ gondola contained the control car, galley, chart room, radio room, dining room, and a double row of 10 sleeping cabins, each of which could bed two. These were, by all accounts, frigid. Further inside were washrooms, toilets, crew accommodation, generator room, and cargo rooms.

We watch the airship being manually pulled out of the hangar like a Macy’s Thanksgiving Day balloon. It then took off vertically using static lift, starting engines aloft. Pitch was manually controlled by an “elevator operator” so as to stabilize wine bottles served with lavish food service. Three hot meals a day were served in the Art Deco dining/sitting room on cloth topped tables with fine Bavarian china bearing the Zeppelin logo. There was even dancing! (An officer played accordion.)

Passengers included an international roster of 29 men including representatives from each destination country, a few rich private citizens who paid up to $9000 for the trip ($139,408.95 today) and journalists. The film shows reporters writing copy (on large typewriters) which would be radioed to news services. Many actual radio announcements are integrated with low key, apt music and select sound effects.

Lady Drummond Hay, widow of a British diplomat and a writer for Hearst, was the only woman onboard. Hay had written about the Graf earlier and was invited on this flight to increase public interest. “What could provide better sales than a glamorous young thing like myself.” It’s her letters and diary which provide an actress voice-over narrative.

Interviewed after the trip, Hay said, “It was just like a private yacht …I could go to the control room and talk to the crew whenever I liked…We had wonderful passenger quarters, the lounge, a beautiful dining room, flowers on the table all the time- they were frightfully proud not to have any canned fruit…”

Circumnavigation was documented by hundreds of photographers sent by Hearst (who had exclusive rights) to capture the accomplishment on land, air and inside the airship. The Graf flew 21.250 miles in five legs from Lakehurst, New Jersey (where it was celebrated by a brass band playing “There’s a Long, Long Trail”),  to Friedrichshafen, Germany, 6800 miles nonstop from Friedrichshafen to Tokyo, Tokyo to Los Angeles, Los Angeles to Lakehurst, and then Lakehurst to Friedrichshafen again.

Adding to voyage frisson (and the film’s seemingly novelistic account) was Hay’s discovery that also on the tour was her secret adulterous lover, journalist Karl von Wiegand (one of the first American journalists to interview Hitler), who had broken with her just before. Confined quarters changed that. (Eventually von Wiegand would divorce his mentally ill wife and partner with Hay.)

The airship also encountered a terrible storm between Tokyo and Los Angeles and for some time was thought to be lost. Hearst had warned her they might crash, drown and die. She wrote that it only made her more determined. We see onboard and hear Lady Hay’s reaction to what might’ve become a tragedy.  The Graf’s huge silhouette glides over water. Each landing elicited crowds, music, and celebration. The rich had no trouble securing alcohol. On land, populations stopped in their tracks often waving as if they could be seen.  After the final US landing, Eckener (the commander) was given a ticker tape parade in New York said to rival that of Lindbergh.

“On my own behalf as well as my fellow countrymen it gives me great satisfaction to welcome you and the members of your party upon the completion of your memorable flight around the world. It has been a great adventure which again stirs the spirit and interest of all men and women. It marks another step in the progress of aviation…”                                      President Herbert Hoover

Because narration is personal and often poetic, photography amazingly inclusive and editing so brilliant, the documentary is rather moving as well as fascinating.