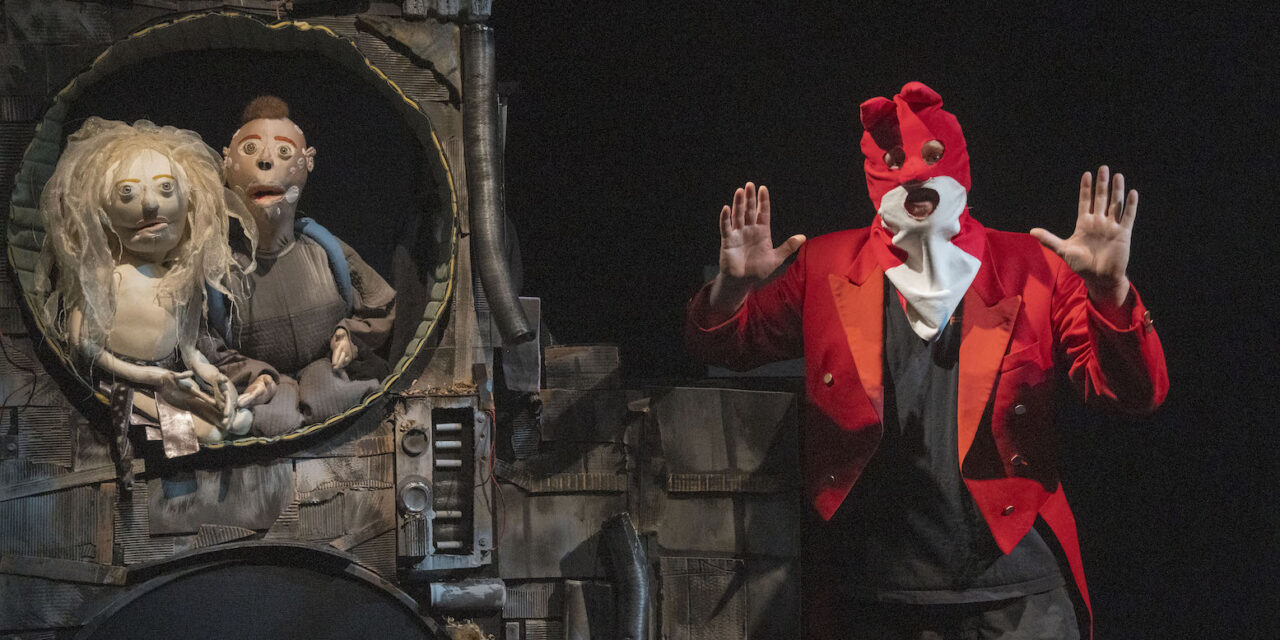 The Immortal Jellyfish Girl is a post-apocalyptic play featuring warring factions and a high body count that includes characters getting their necks snapped or even being beheaded—all in the service of a story with a dark but vital environmental message.

Like so many movies of the genre, the play’s futuristic world-building is a dizzying visual feast, but in this case that’s less about the sets and more about the cast which, with one vital exception, consists entirely of puppets.

The former are led by the ruthlessly violent Doyenne, while the latter have been led by Turtle. But Turtle has been locked in his underground lab by Aurelia, the Immortal Jellyfish Girl, whom he created as the world’s first DNA bank, but who was horrified by some of his other work. (The Immortal Jellyfish is a real creature, which can essentially start life over as a polyp later in life. Aurelia are moon jellies.)

Aurelia, who can create new life but is in desperate search of water so that she may start again in the primordial soup, eventually meets and falls for Bug, a Technalis, who doesn’t really feel loyalty to the cause. (The puppets were beautifully designed and built by Kirjan Waage, who co-wrote and co-directed with Gwendolyn Warnock. Performers, whose roles were not specified in the program, were: Lei-Lei Bavoil, Alexander Burnett, François Cuder, Dorothy James, Andy Manjuck, Peter Russo, Kirjan Waage, Gwendolyn Warnock and Olivia Zerphy.)

From the opening moments this play breaks radically from most self-serious ecology-minded sci-fi. The production balances its dark themes with a healthy dose of whimsy from the outset, when Fox, the only non-puppet, comes on and tells the audience that “the puppet show hasn’t started yet,” before introducing us to the play and its ideas in a way that makes it clear he won’t be the most reliable of narrators.

Fox is a guy in a mask—he lives in our present and belongs to an all-inclusive group called Animal R.I.O.T. with “about 50 members . . . all inactive.” He travels to the future to witness and occasionally intervene in the action, though he also sometimes sits in the audience and watches from there.

That’s fitting because while those in the future think Fox was a prophet, he’s really just a person in the present. In other words, he’s shocked by his own role in the death and destruction being done around him and therefore relies on denial to get through everything. Like us, he loses control of his narrative, and can only watch helplessly as the planet is destroyed.

Fox is aware, however, that the play is slipping away from him (in more ways than one, for it could stand some editing). When Turtle calls him (on a lobster phone), Fox frets, saying, “You can’t call me from the puppet show . . . You’re breaking all the rules. You’re breaking the fourth wall and the fifth wall . . . and some dimensions, space-time continuum and the worm hole. You can’t call me from the future!”

His interludes offer much-needed levity, like when a character that’s a spider lands on him and he shrieks and throws it in the trash before apologizing to us: “I’m sorry. I know it’s just a puppet. But it’s a little bit hairy and scary . . . just like genitals.

(He also comments on the play itself, so when characters or scenes feel like tropes, he’ll often interrupt to note that this is “classic.” While there are pop culture references, the script largely avoids cheap laughs, including several chances for obvious “Star Wars” references.)

The play also balances that weird duality where a puppet show activates the imagination so you can momentarily watch the puppeteers on stage work their magic—they create life and death—without losing your immersion in this world.

Okay, I get it: you’re almost done with the review and your brain is swirling, trying to sort out whether all this—the plot, the puppets, the absurdities—adds up to something coherent or if it’s just a mishmash of ideas, jokes and inanimate objects.

Without ever becoming predictable, The Immortal Jellyfish Girl maintains its focus and high stakes, creating an emotional investment in the characters and their fates. The show also never loses sight of the fact that life as we know it is fast spinning away from us as we just sit and watch from the sidelines. It’s a sobering message delivered in a unique and entertaining way that will have you thinking about the play long after it ends.