Bill Dyszel’s show at Don’t Tell Mama “The Internet Ate My Brain” bytes back at technology with song! 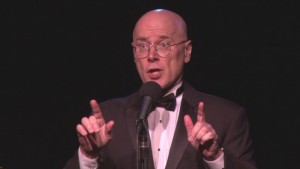 The blazing inventiveness, razor-sharp comedy, and musical wit of The Internet Ate My Brain is unmatched by anything currently on the cabaret stage. The title alone gives just an inkling of what a gleefully unique, interactive experience you’ll enjoy in this fresh, funny evening of side-splitting songs, multi-media ingenuity, and audience activities. The writer and star of the show, Bill Dyszel, combines the remarkably diverse aspects of his professional background as a singer at the New York City Opera, author of more than 20 computer books including Microsoft Outlook for Dummies, and an award-winning filmmaker to create an inspired and hilarious revelation of how technology is warping our lives and our culture.

Part circus ringmaster, part recovery cult leader, Dyszel launches into a kind of goofy musical TED talk that analyzes and lampoons the most precious “maladies” of our era, including selfie obsession, online shopping compulsion, and smartphone addiction. He also serves as a facilitator, leading the audience at Don’t Tell Mama into a live conversation about everyone’s involvement in the world of Internet insanity. He also screens several of his short musical video comedies while inviting the audience to send text messages to the stage to win prizes.

You can simply go to The Internet Ate My Brain to enjoy a first-rate vocalist, and you’ll still be delighted. Dyszel’s warm lyric baritone soars through parodies of some of the most glorious tunes in the American Songbook, drawing on composers from Burt Bacharach to Rudolph Friml. If there’s anything to quibble about is that the songs inspire so much laughter that they sometimes distract from the wonderful singing.

Cleverly hidden in this zany premise is a cultural critique, built on some important and original insights about how we are rapidly surrendering to technology, often at a cost, and always voluntarily. But the wholly original concept behind this show masks any feeling that the author is “sending a message.” We just feel like we’ve had a delightful evening with some friends, and a conversation that leaves us thinking, while humming a catchy tune.

As the writer, Dyszel tells us that he’ll be constantly adding new and updated songs and films to make the show evolve to keep pace with the Internet. So we’ll be looking forward to new editions of the show as the Internet itself mutates before our eyes. The song list includes a mixture of parodies and original music, all with Dyszel’s reliably sharp, clever lyrics. Richard Danley’s musical direction elevates the evening into a rich, satisfying musical whole. Linda Amiel Burns’ stage direction helps turn this wild array of diverse elements into a focused, complete, and unfailingly polished evening of entertainment. The Internet Ate My Brain is surely destined for bigger things, but the time to see it is now.