The Metropolitan Room Unites at The Triad 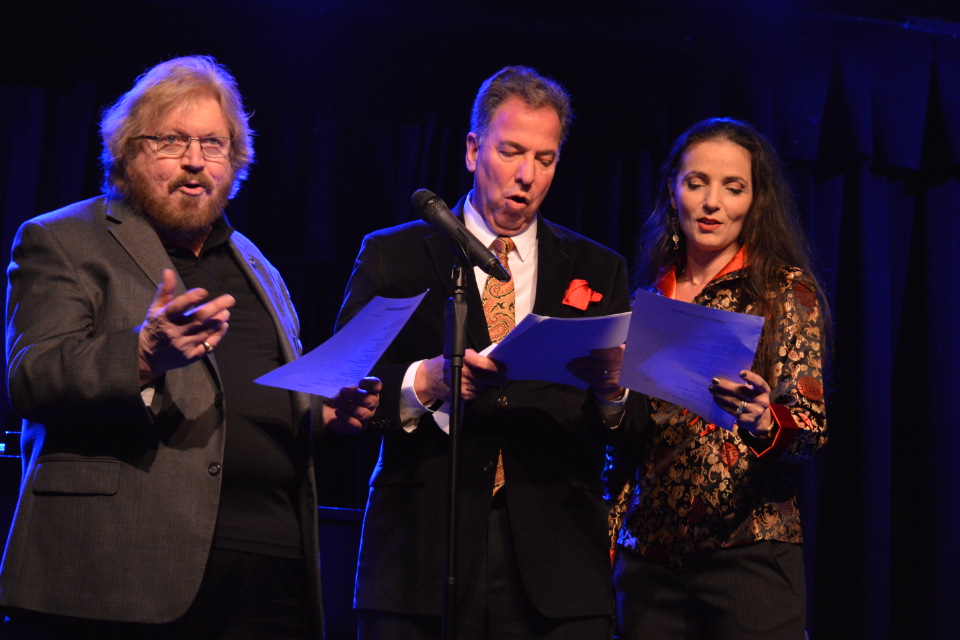 Talk about living in the moment  . . . it was a déjà vu evening as The Triad sizzled with the memories and in the spirit of the best cabaret and jazz NYC nightclub, The Metropolitan Room.  The leaders of the pack are the beloved and loving Bernie and Joanne Furshpan who gathered the tribe of Met Room fans, friends and performers to relive some of the best moments of its 11 year history.  Why they even surprised with some memorabilia – a piece of the club’s awning!

Since this is not meant to be a review but a tribute, here’s an overview of who did what:

The great Julie Budd, a resident performer at the Met Room, opened with “The Best Is Yet to Come” and “All The Way,” accompanied by long time musical director Herb Bernstein. Young Charlie Romo, in the spirit of Sinatra and the swingin’ Great American Songbook crooners, delivered Sophie Tucker’s “Some of These Days.” Minda Larsen, had entered the MetroStar competition four times before finally winning and sang Julie Gold’s anthem “From A Distance.”  Eddie Sarfaty delivered his own brand of comedy as a neurotic gay Jew and classically trained soprano Dorothy Bishop, with full frontal puppet, suddenly morphed into Kristen Chenoweth with her version of “Defying Gravity” as “Nasal Cavity.”

From a tech at Don’t Tell Mama to a minister, Shawn Moninger is living his dream, singing partner David Friedman’s (at piano) “We Live on Borrowed Time” – words of wisdom first recorded by Nancy LaMott.  Tenor Joshua J. Bennett gave stunning pause to Jason Robert Brown’s “It All Fades Away” (Bridges of Madison County). JayCee Driesen with Lydia Sabosto at the piano, delivered a dramatic “Fifty Per Cent” (Billy Goldenberg and The Bergman’s – from Ballroom).  Mark McCombs – a waiter at the Metropolitan Room and now at The Triad – was a funny country singing impersonator with “Have a Nice Day.” Suzanna Ross sang a passionate “Over The Rainbow” in French and English.

Richard Pryor, Jr. took us back in time with a song his father recorded, the bluesy and soulful “Nobody Wants You When You’re Down and Out.” You can find it on YouTube.  Then it was time for the Mamala of Cabaret – Bobbie Horowitz – to take the stage. An on-going presence at the Met Rm. with her series “It’s Just a Number” (that now continues at Don’t Tell Mama) she sang her show’s theme song, her own penned “Never a Freshman Again.”  Oleg Frish – who sings in many languages – offered up one of the songs from his latest show Swing Around the World, “Hello, Dolly” in English and Yiddish that brought many audience laughs. He’s just one of the talents under Furshpan management that also includes Larry Kerchner, Richard Pryor, Jr, Dorothy Bishop and Charlie Romo.

The Cuban Kid, Joey Infante, with Michael McDonald on piano, gave us “Besame Mucho” while Ron Dabney offered a cool, swinging “Tomorrow.” Comic Bob Greenberg wears many hats as Oliver Hardy calling the sex hotline, Lou Costello testifying at the John Gotti trial, and Jackie Gleason doing Shakespeare. The man is funny and will be back at The Triad in his own evening of wit.

The evening came to a close with the liquid silver jazz vocals of Sara Zahn, hubby Allan Kashkin on piano, offering up an original song, “No Good for Me.”

Each of the performers offered up oddles of thanks to Bernie and Joanne and the family they created . . . a family that still exists and keeps extending as Bernie Furshpan has taken on the recent role of Booking Manager at The Triad.  Mr. Furshpan, too, wears many hats and has had an astounding and varied career path. From famous chiropractor to comic, real estate mogul to managing partner/owner of the Metropolitan Room and made more famous as husband of Joanne Furshpan. He’s also writing a monthly series for TheaterPizzazz.com “Short, Sweet and Relevant.”

It was a warm and fuzzy evening filled with lots of heart with accompaniment by the Howie Gordon Trio (Howie Gordon on drums, Gregory Toroian on piano and Boots Maleson on bass). Stay tuned . . .more to come!