The Museum of Broadway – It’s About Time! 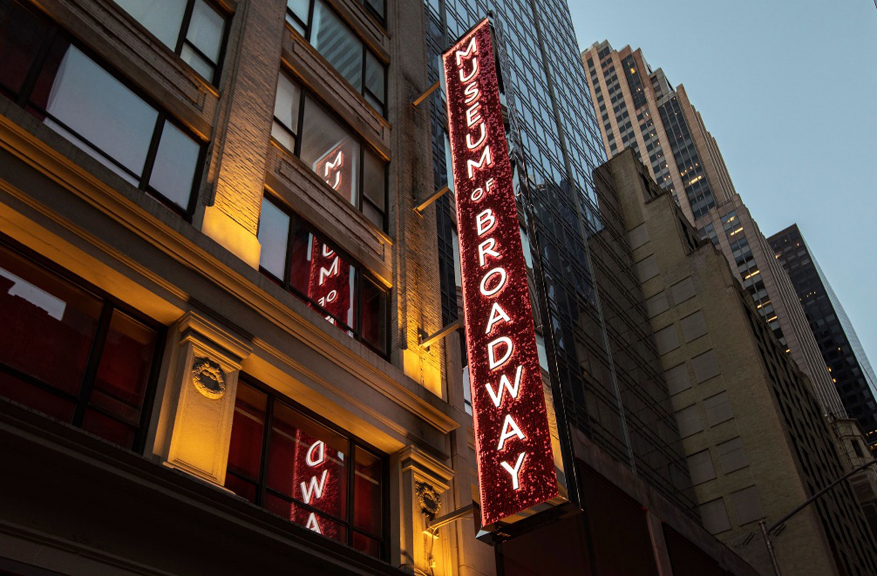 “You’ve got to have a dream, if you don’t have a dream, how you gonna make a dream come true?” Oscar Hammerstein II (South Pacific)

That Broadway brought in 1.43 billion dollars in the 2018/2019 season employing 97,000 people are just statistics unless you own a business in the neighborhood or among those employed. That its cluster of theaters has illuminated and entertained us since 1735 when the first venue opened is something personal to each of us who experiences The Great White Way, referring to its multitude of lights. Remember the thrill of your first show, of seeing an actor known only by reputation, of laughing, crying, thinking differently, humming new tunes? How many aspiring thespians has it fueled? How many celebrations has it seen?

Founders Julie Boardman and Diane Nicoletti have established a home for the history of theater around Times Square. This tribute to “creators, sustainers, invaluable supporters and fans” is now housed in a warren of galleries at 145 West 45th Street.  (Each floor feels something like a genial maze.) One journeys through a visual and audible progression including costumes, props, stage set maquettes (that of Wicked is immensely complex), renderings, photos, programs, posters. Even the hallways between floors are covered with illuminating materials.

Costumes from such as Oklahoma, Little Foxes, Chorus Line, Phantom of the Opera and Hamilton are just a few of what’s on display. The candy store set from the original production of West Side Story is recreated. Sit in the flowered swing from Hair or walk among corn stalks (Oklahoma!) for a photo.

Videos of performance and talking heads (watch Lynn Ahrens discuss lyrics, Emmanuel Azenberg talk about producing and Derek McLane wax poetic about set design), quotes, brief biographies like those of theater founders, the Nederlanders and legendary songwriters, George and Ira Gershwin), terminology explanations, even a light and sound board…in front of and behind the scenes. More than 500 individual productions are featured.

Vaudeville featured everything from dog acts to slapstick skits to dance teams…George Burns and Gracie Allen, Fred and Adele Astaire started in vaudeville. (Fred made it to films.) George M. Cohan grew up in it, then produced his own shows writing innumerable classic songs (inspiring the musical George M.) Read all about it. See photographs, posters, programs.

1927’s Showboat introduced serious, realistic themes to the musical, something Rodgers and Hammerstein  later did repeatedly. “The more you go to theater and the more you hear stories that you aren’t necessarily familiar with, the more open you become to embracing other perspectives.” Playwright Lynn Nottage

The 1943 musical Oklahoma! introduced ballet to Broadway in Agnes de Mille’s capable hands. Decades later An American in Paris arrived. “You use the bodies of dancers as instruments, like the keys on a typewriter, to tell a story.” Director/choreographer Gower Champion who among other credits, helmed the glorious tapping of 42nd Street.

Shows that pushed social and political boundaries fit into the context of a timeline. Why then? What came before, what followed? “The nervous system of any age or nation is its creative workers, its artists. And if that nervous system is disturbed by its environment, the work it produces will inescapably reflect the disturbance, sometimes obliquely and sometimes with violent directness.” Playwright Tennessee Williams

Remember what a shock Hair was to that nervous system? Sit in its flowered swing and have your photo taken. See the exuberantly colorful costumes. Hear the music. The visionary juggernaut Chorus Line, midwifed at our own, home-grown Public Theater told the story of indispensible gypsies in their own words.

An area called Broadway Responds to the Aids Epidemic opens with” You would go into rehearsal and before you could get to previews, friends, colleagues and coworkers would have disappeared. People became sick and landed in the hospital. Some would come out, many would not.” Anonymous. A Broadway Cares patchwork quilt is on proud display indicating the tremendous hit suffered by its community. The astounding Angels in America won a Pulitzer.

A small exhibit on the ground floor features the oeuvre of iconic artist Al Hirschfeld in celebration of a new volume, The American Theatre As Seen By Hirschfeld. Follow the incisive chronicler and the history of the Great White Way unfold before one. Get up close with a sampling of his remarkable work.

Whether you’ve been among Broadway audiences since a child, are in the business or visiting the Big Apple with an eye to seeing some shows, The Museum of Broadway is a good bet. Give yourself time to read some of what’s on the walls, listen to a few talking heads, and inspect that which is on close display. Curation is excellent. One garners a real feel for Broadway’s evolution from T.D. Rice’s original character Jim Crow to crawling through an ersatz Alice in Wonderland door from Company.

Julie Boardman is a Tony Award winning Broadway producer, and also runs an event staffing agency (Boardman Productions) through which she has worked on hundreds of promotional brand activations.  She went to her favorite client & longtime friend, event producer Diane Nicoletti with this idea. Contributors are legion.

The museum is open 7 days a week from 10am to 10pm.
There are timed (15 minutes grace) and flexible tickets at different price points. The first Tuesday of each month entrance prices will be reduced. https://www.themuseumofbroadway.com/

Exhibits are meant to be explored in one direction. Guides will be on hand should you get turned around. Stairs take you there but the facility has an elevator, just ask. Guests 12 and under must be accompanied by an adult 18 or older. There’s coat check just behind a shop on the ground floor.

A portion of each ticket will be donated to Broadway Cares/Equity Fights AIDS.