The Old Man and the Pool 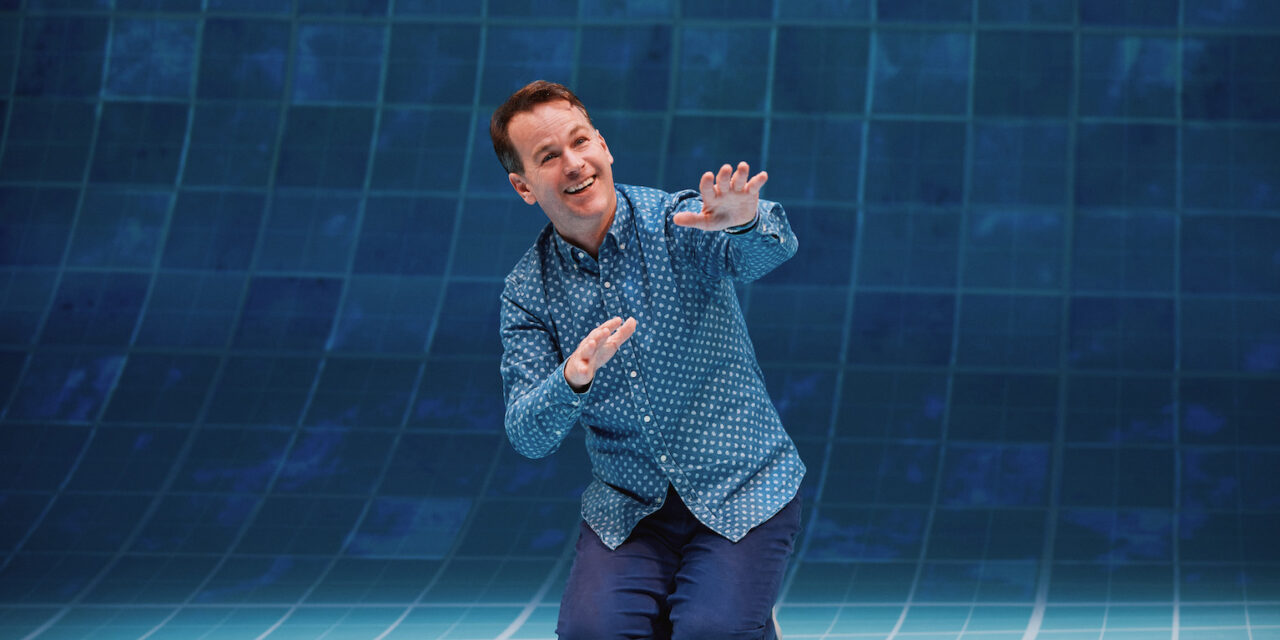 Ask any working comic and they’ll tell you that the standup comedy business is more difficult now than it has been in over fifty years. Not since organized crime figures ran most, if not all, comedy clubs could one’s career be so abruptly ended by a verbal misstep. Back then, comics suffered broken limbs or worse. These days the damage might be longer lasting: a social ostracization that, deserved or not, could result in a virtual lifetime ban from the business, regardless of how large or minor, intentional or inadvertent, the offense. Beloved long-form standup comic, Mike Birbigilia, however, never drifts into such perilous waters; and that may be the key to what makes his shows so universally appealing. His newest show, The Old Man and the Pool—now playing through January 15, 2023 at The Vivian Beaumont Theater at Lincoln Center—is no exception. It’s Birbiglia at his finest, touching on subjects that many of us will face in our lives in a manner to which we can easily relate whilst in the middle of deep, heaving laughter.

It’s fascinating to have watched Birbiglia evolve on the boards for nearly two decades, and imminently satisfying to witness his latest stage, one of a happy, caring family man appreciating this time of his life with relish, just as he seemed astonished by the events that came before: in Sleepwalk with Me (off-Broadway 2008), My Girlfriend’s Boyfriend (2011) and The New One (2018). We’ve heard his stories about health scares from bladder cancer to an REM sleep disorder that nearly cost him his life; to his grappling with self-doubt about marriage and children; and finally (in the last production) starting a new relationship and having a child, much to his own astonishment. In all these shows Birbiglia has been a humble, befuddled, disheveled and undeniably sweet man for whom we have great concern despite laughing at his misfortune—because he’s laughing, too, and we all understand that’s just how life goes.

In the Old Man and the Pool, the Birbiglia saga continues. But this time there’s a twist. True, he’s still plagued by health woes, has an aversion to exercise, loves food that is bad for him and finds himself reflecting on the perilousness of his existence (and to describe anything beyond that would do a disservice to anyone who wants to see the show and should experience it completely fresh, without any knowledge of the material beforehand). Here, though, there is more polish, more confidence and Birbiglia unquestionably comes across as a man who is quite happy (despite persistent anxiety) with his life and present circumstances. It’s not just Seth Barrish’s smooth direction or Beowulf Boritt’s sweetly curved swimming pool-wall set (wholly reliant on Aaron Copp’s cool blue swimming-pool-at-night lighting), which doubles as a snazzy projection screen (Hana S. Kim), but Birbigs himself is refined, confident and relaxed.

More so than any other Mike Birbiglia performance I have seen, the comic is at ease, thoroughly enjoying not only performing this terrific, hour-long show, but seeming thrilled at being on stage at Lincoln Center. It’s a big deal for a stand-up and he not only knows it, but is thrilling in the moment. When a large group of latecomers were seated about 10 minutes into his set, he kibbitzed good-naturedly, giving them a hard time for showing up late, but then offering a sped-up summary of all they’d missed previously. For those of us already there, it was even funnier the second-time around, especially considering his accelerated delivery. Throughout the night he affectionately referred to their tardiness, while making callbacks to other jokes in the set, as well as to jokes from previous productions as a bonus for those who’d seen him before. Deep into the show there came a moment where he expertly toyed with the notion of the infectiousness of laughter. The audience rolled and rolled with the joke and Birbiglia himself, always empathetic with the audience (which may be one of the keys to the reason audiences find him so endearing), was legitimately in on the joke, breaking into laughter with them, everyone enjoying the moment (and momentum) immensely.

Mike Birbiglia has clearly evolved into an absolute master of his craft and is easily one of the great all-time long-form comics. To witness his performance live is one of the great experiences to be had in a theater. The Old Man and the Pool should not be missed. It may eventually wind up on a video streaming service (like his other shows), but don’t miss the chance to see him in person. It’ll warm your heart and it’s well worth it.

The Old Man and the Pool. Through January 15 at the Vivian Beaumont Theater at Lincoln Center (150 West 65th Street on the Lincoln Center Campus). www.lct.org