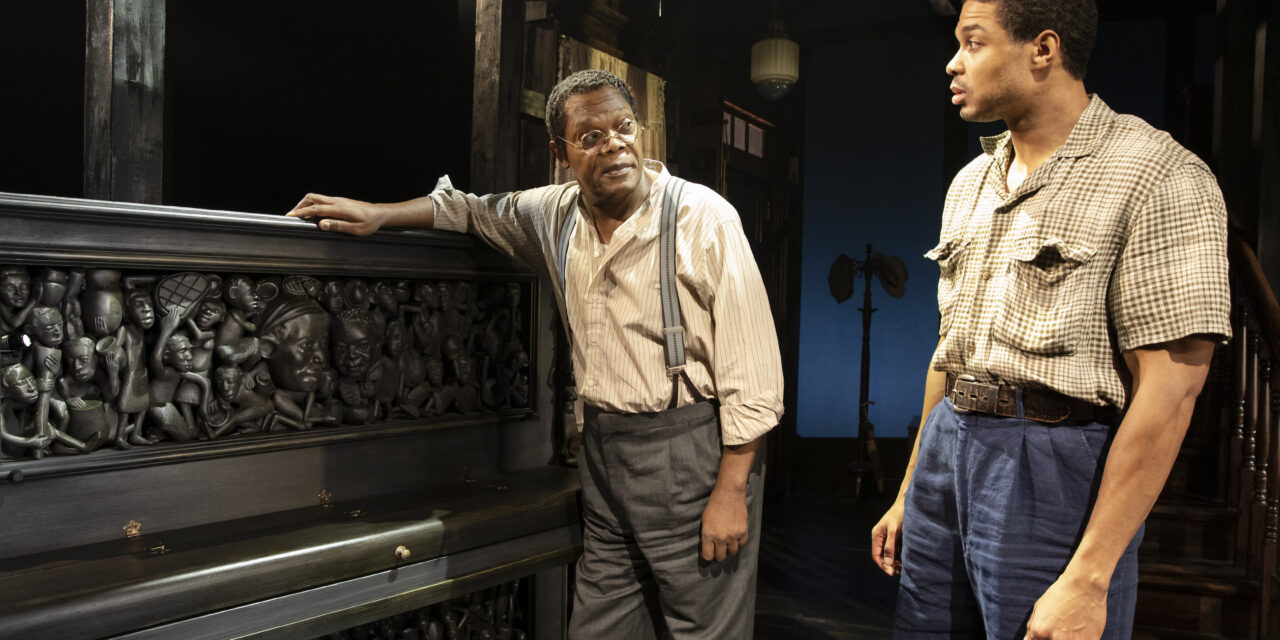 Have you ever wanted to return to a show desperately, and see it one more time?   Especially for one unforgettable moment?

That happened to me after attending the thrilling revival ofAugust Wilson’s The Piano Lesson, now on Broadway.  I’d go back over and over again for those five minutes in Act I when four characters sing a rousing prison work song called “Berta.” That explosive song – one they all know too well – comes from the very depths of their bodies and souls, expressing a shared past that once defined them.  It conjures up an entire chapter of history in the Black American experience that August Wilson has preserved on the stage for a grateful posterity.

How can we measure the rich legacy of Wilson’s oeuvre?  This great American playwright has given us an extraordinary gift called “The Century Cycle,” a play a decade for the 20th century, telling the story of the Black American experience and the quest for identity, freedom, agency, and dignity.   Written from 1982-2005, nine of the ten plays are set in Pittsburgh where Wilson grew up.  They were developed in the American regional theatre network with loving care, and all of them ultimately made it to Broadway.  These ten plays have launched the careers of three generations of Black American actors and directors and have changed the landscape of the American theatre forever.

Set in 1936 during the so-called Great Migration, The Piano Lesson (written in 1987) tells the story of a Black family called Charles, struggling to exorcise the ghost of slavery from their past that still haunts them in the present.  It features Boy Willie (John David Washington), a young farm worker from down South who journeys to the home of his uncle Doaker Charles (Samuel L. Jackson) in Pittsburgh for the purpose of retrieving the family’s piano – their most precious asset.  By selling it, he intends to buy back the farm from the Sutter family who had enslaved the Charles family for generations.   A conflict ensues between Boy Willie and his sister Berniece (Danielle Brooks), who lives with Doaker and refuses to let Boy Willie take it.

The piano has a special history, going back generations.  It represents their family’s heritage, featuring carvings of their ancestors, and was stolen by their grandfather from the Sutters.  According to Berniece, the piano was polished with her mother’s blood and tears.  Caught in the conflict between the warring siblings are Doaker (in whose house Berniece, her daughter Maretha, and the family piano now reside) and Wining Boy (Michael Potts), another uncle – a drinker and gambler who loves playing on that piano.

In this loving, luminous revival of Wilson’s Pulitzer-Prize-winning play, director Latanya Richardson Jackson has assembled a marvelous cast to play these memorable characters (led by her husband, Samuel L. Jackson).  With the energy and warmth they exude and their exceptional ensemble spirit, they feel like a true family itself.  Together, they interact with each other and tell their family’s history in the rich dialogue and mellifluous, poetic passages that Wilson has given them.

As Doaker, the stoical center of the family, Jackson is a moral force, giving a spellbinding account of the piano’s history.  As Boy Willie, John David Washington (Denzel’s son) is the play’s driving energy (he never stops talking, and his command of Wilson’s language is dazzling).  He gives a charismatic performance of a young man with a dream (owning his own farm) that he is desperate to achieve to give his life meaning.  As Lymon, Ray Fisher offers an endearing portrayal of Boy Willie’s clueless sidekick.   As Berniece, Danielle Brooks is a formidable presence of dignity, tenacity, and resolve.  As Maretha, Berniece’s young daughter, Nadia Daniel (performing in the matinee I saw) offers a charming mix of obedience and spirit of the new generation.  As Wining Boy, Doaker’s irresponsible brother, a feisty Michael Potts completes the quartet (Boy Willie, Lymon and Doaker) to sing the memorable “Berta,” evoking the past of persecution, slavery, and misfortune they are all trying to leave behind.   Wilson’s plays are all about these beautifully drawn character portrayals, rich in humanity, and this cast does their author proud.

Meanwhile, there is a greater force that threatens the future of the family’s piano – in the form of the ghost of Sutter, their former slaveowner, who haunts Doaker’s house and appears to various members of the family throughout the play.  Director Latanya Richardson Jackson and her designers (Beowulf Boritt, set; Japhy Weideman, lights; Scott Lehrer, sound) take full advantage of this supernatural presence, representing the legacy of slavery.   With every attempt to remove the piano from Doaker’s parlor by Boy Willie and Lymon, there is a sudden gust of wind accompanied by surreal sound and lighting.  These powerful effects crescendo to the play’s sensational climax, when Avery (a preacher and suitor of Berniece, played by a delightful Trai Byers) attempts to bless the house and thereby exorcise the ghost.

This superb The Piano Lesson shines in a series of numerous revivals of  his plays  since August Wilson died in 2005.  We will remember this one for its excitement, its energy, its ensemble, and its inspired theatrical vision of exorcising the past and moving into the future for Black Americans.   It’s a thrill to see Wilson’s legacy onstage – as represented by the third generation of great Black American actors and directors whose careers have been enriched by his work.  They are giving back by infusing his plays with creativity, energy, and love.

A coda to this review: on the Wednesday matinee I attended, there were peals of laughter, gasps, and screams coming from some high school groups, in response to several scenes (all appropriate in the various moments).   At the curtain call, actor John David Washington waved to the balcony in gratitude for their exuberance.  Such spontaneous, heartfelt responses from young audiences reaffirm the gifts of August Wilson’s great works and the power of the theatre to reach the broadest audience with their humanity, imbuing us with much needed hope for the future.