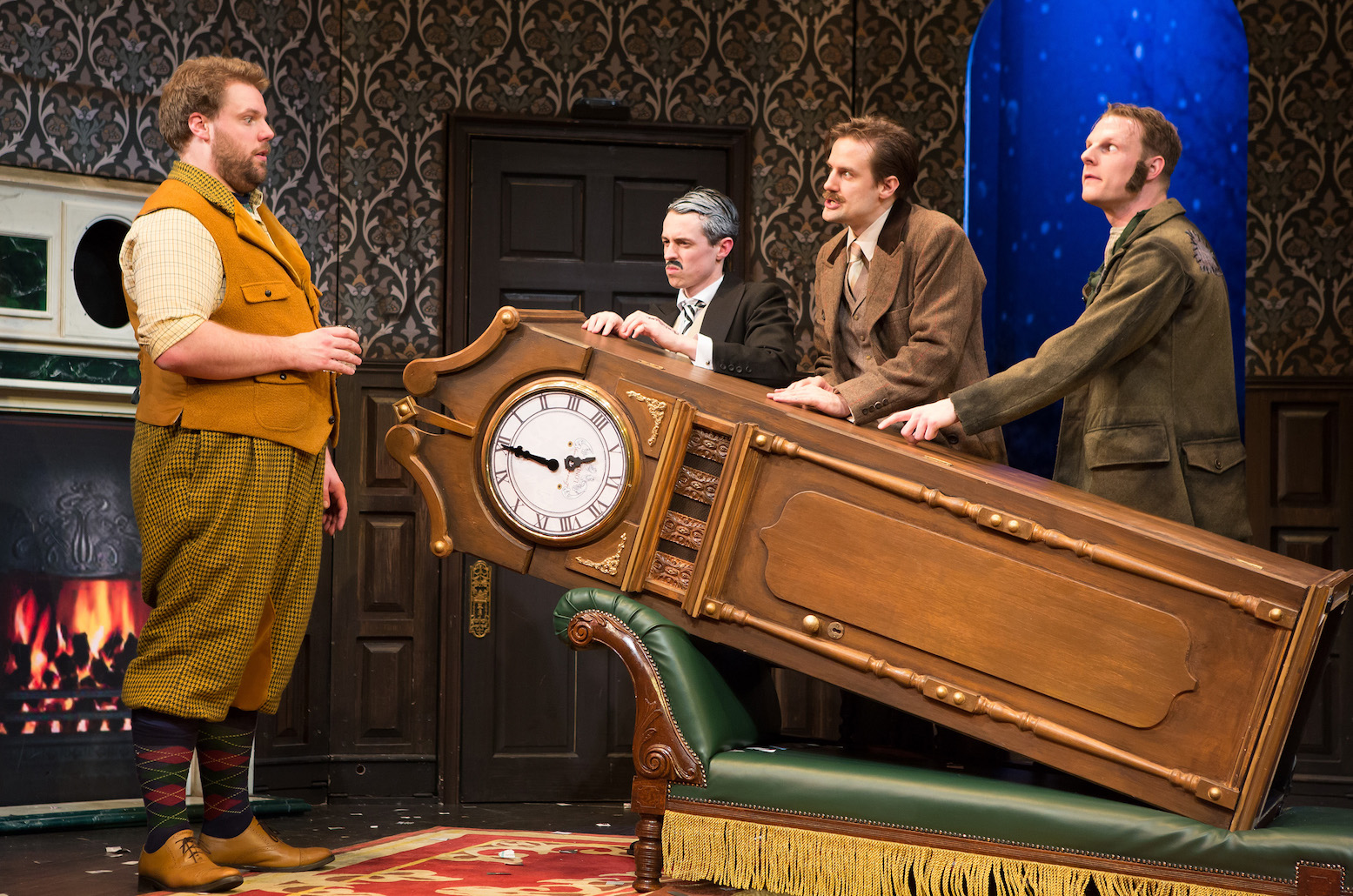 Theater Pizzazz loves more than one review on a show. Here’s another one!

The sign on the theater marquee is upside down, there are misprints in the program – but that’s only the start of The Play That Goes Wrong, the fabulous meta-farce imported from London now playing on Broadway. From the moment this runaway romp takes off, the antics come so fast and furious that I stopped taking notes, I was laughing so hard.

From what I can remember through the haze of hilarity, there’s a loopy troupe called The Cornley University Drama Society that is putting on an Agatha-Christie-style mystery called “The Murder at Haversham Manor.” In a pre-show speech, while the desperate crew readies the set in full audience view, director Chris Bean (played by Henry Shields) explains, apologetically, that there have been factors that have hampered past productions – such as casting limitations (“Two Sisters”, “Snow White and the Seven Tall Men”, and, notably, “Cat”). So he’s bracing us for a disaster, and boy, do we get one – and a wonderfully riotous one, at that.

The creaky manor house sitting room (designed by Nigel Hook), where a clueless troupe of eight tries to solve a mystery, is the site of every kind of potential production gaffe or gag possible – all of which, of course, happen. A downstage settee displays a corpse that keeps moving at the wrong times. The fireplace mantle features a portrait of a large cocker spaniel, to which people keep referring as the Lord of the Manor. A large grandfather’s clock reads 5:00 (though it chimes 18 times) – and also doubles as a hiding place for various characters, living and otherwise.

Don’t bother looking in your program to follow the plot line – you’ll only find a cast and creative list that features director Chris Bean also as designer, costumer, prop maker, box office manager and a half-dozen other credits. Instead, sit back and marvel at the mischief-making of the Mischief Theatre company, whose skills in physical comedy and split-second timing are impeccable. Elevators explode, balconies collapse, doors slam, props drop, and understudies appear on script to stand in for “wounded actors” who inconveniently reappear, causing a row. Scenes repeat because actors lose their place in the script (my favorite gag), and high above it all, a drugged-out techie dressed like a biker is forced to run onstage and pick up a script, too. Oh, and there’s an invisible dog on a leash that keeps barking and biting everyone. It’s a miracle that all these actors live to take the curtain call.

Had enough? You’ll see “rolling in the aisles” like you haven’t seen since Noises Off, Michael Frayn’s meta-farce that was revived in New York last season. Meanwhile, I marvel at this all-British company’s dazzling comedic expertise, notably David Hearn, who is a 6’2” sight gag with an elastic body, and Henry Lewis, whose voice spans several octaves. The spirit of Monty Python is alive and well in the Mischief Theatre.

At their final bow, one of the actors broke protocol to announce that another company member – Amelia McClain – was making her Broadway debut that afternoon. Clearly, this was a crowning achievement – one in which the company took pride. For me, it’s the other way around – we should be thanking them for crossing the pond and brilliantly performing the genre that’s hardest to do well in the theatre – namely, farce.

The Play That Goes Wrong, a Mischief Theatre Production, by Henry Lewis, Jonathan Sayer and Henry Shields, directed by Mark Bell, at the Lyceum Theatre. 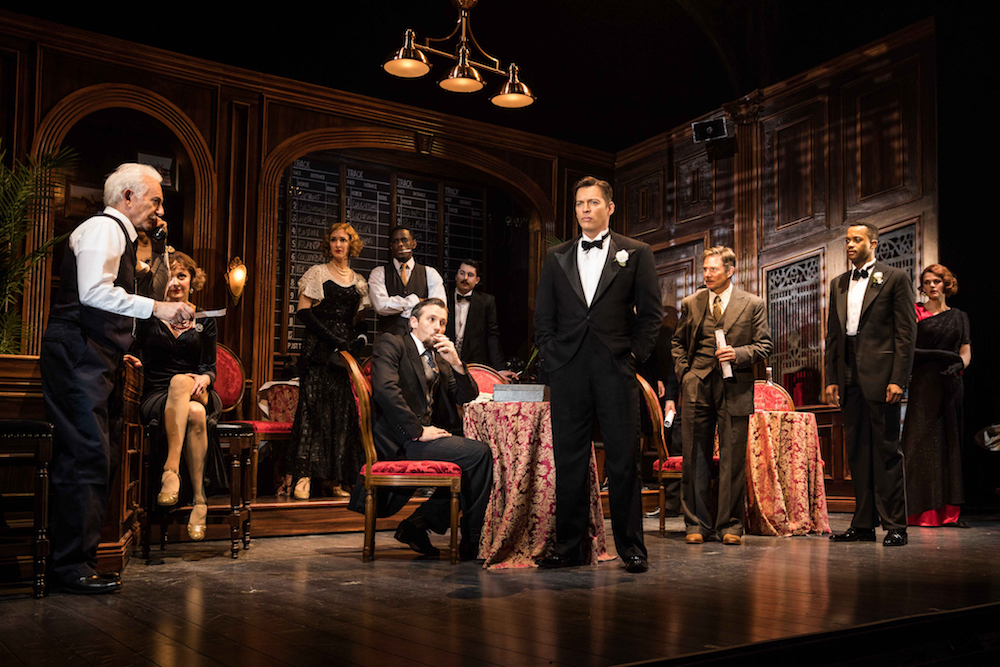 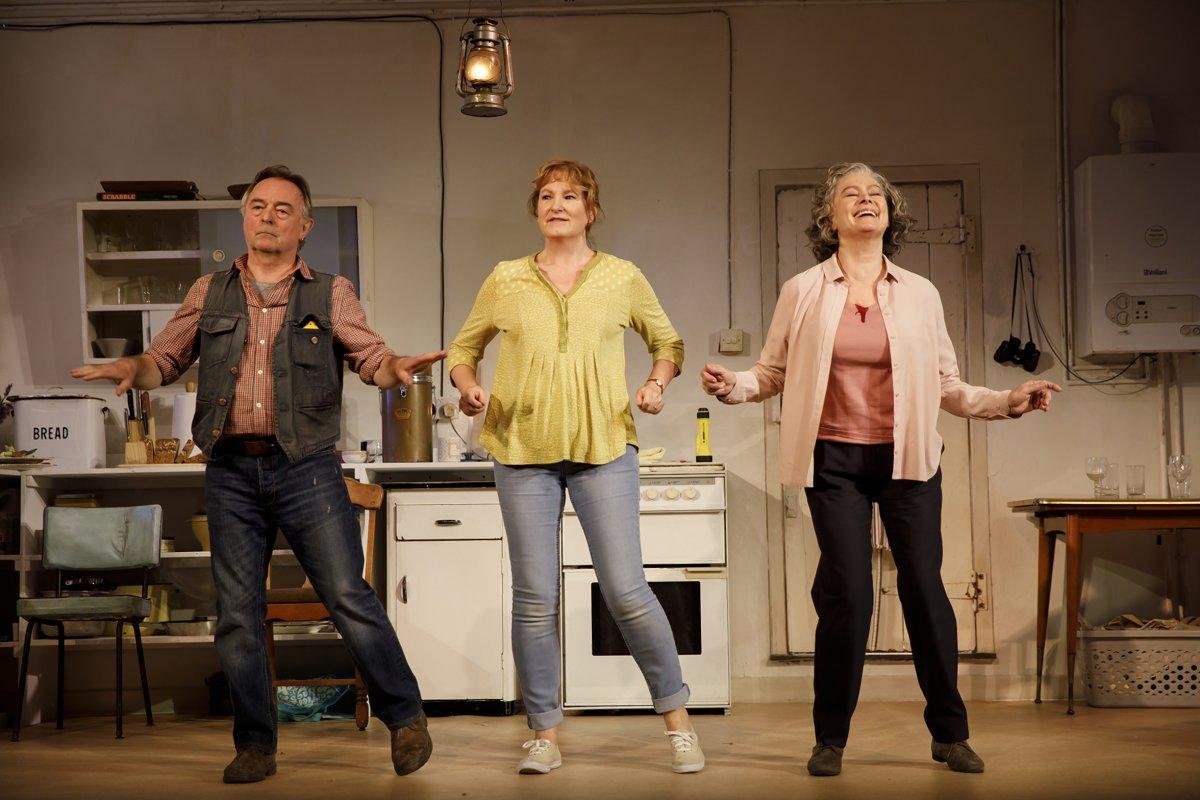 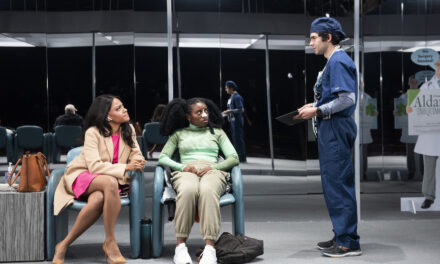 I’m Revolting – At the Atlantic