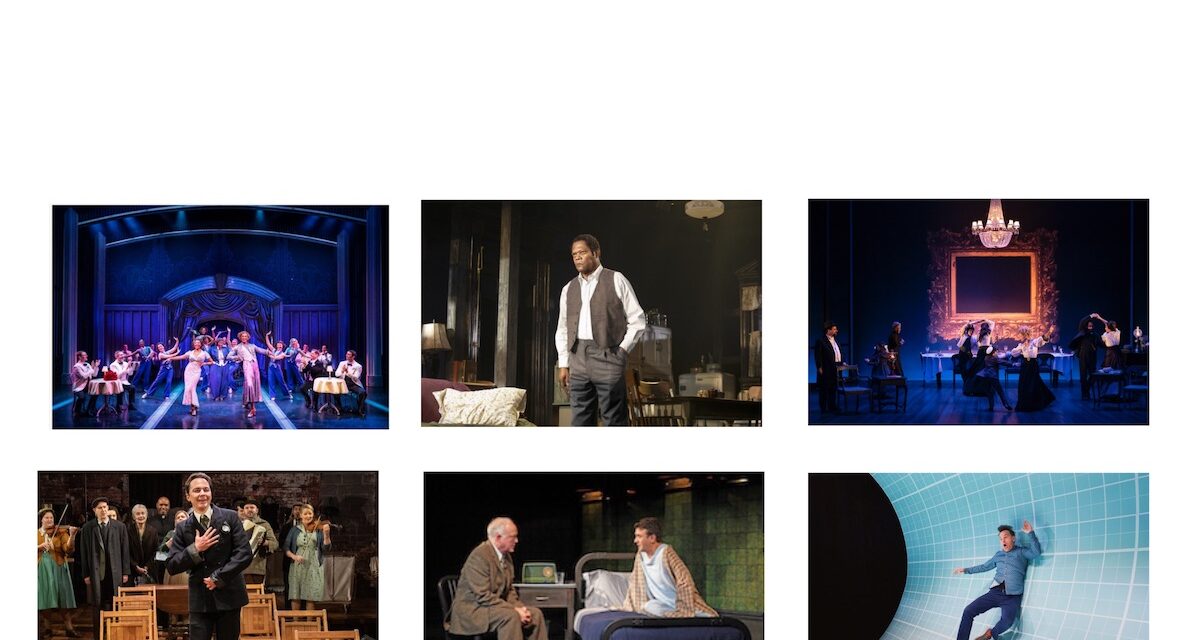 Time to Take Stock: BEST SHOWS OF THE SEASON (SO FAR)…

At roughly the half-way point of the season, it’s fair to say that the theater is reflecting the human condition more acutely than usual — at least if you consider life essentially a long road of misery punctuated with occasional moments of joy. Okay, that might be a little bleak but, let’s face it, a lot of producers are losing buckets of money, and a lot of actors are shedding far too much blood, sweat, and tears, only to find their shows closing stunningly fast — even when they get great reviews!

One might add another, less obvious, reason. There is no compelling editorial voice that drives people to the theater. Once upon a time, a great review in the New York Times could turn a play or a musical into a hit overnight. Not anymore. And now, in the internet age, everyone is a critic. And these days, because you get more clicks with snark than sweet, the internet tends to drive negative word-of-mouth, which doesn’t help much, either.

But like that tree that grows in Brooklyn, some shows still manage to smash through and find their way to the light. In most cases, of course, it helps to either have stars, much-loved creators, or well-known and beloved source material. And it doesn’t hurt to have a subscription audience right now either, so a show has the time to build an audience. This, however, is not a time for quibbling; let’s take what we can get and simply say, “A hit is a hit is a hit.” And, frankly, we need those lightning rod hit shows in order to bring some level of health back to the boards.

The best, and surest way to a hit has — and always will be — quality. Mind you, some great shows fail. But the truth is, the best will usually rise to the top. And these are the best so far during this tortured season…

Playwright Tom Stoppard is probably as close to a genius as contemporary theater has seen. His mediocre plays are eminently enjoyable, but his great plays are breathtaking. Leopoldstadt is a great play. And it is a great play despite it having to surmount a huge obstacle: how do you write a play about the holocaust after so many brilliant books, plays, and movies on the subject have already been written? As is so often the answer with great art, it starts out as something deeply personal, but in the hands of an inspired storyteller, we end up with something heartbreakingly universal.

An aside: We met and talked with Tom Stoppard many years ago at the Toronto Film Festival. We mention this only because when we left Lepoldstadt, we couldn’t help but think that this play was very specifically autobiographical. But how could that be? Stoppard was obviously not Jewish. Or was he? And that’s what Google is for: and we learned that Stoppard IS Jewish, but growing up he didn’t know it, himself.

So, Leopoldstadt is a somewhat fictionalized version of his Jewish antecedents in Vienna, and how they dealt (and did not deal) with the onslaught of the Nazi’s from the 1920s until the early post war years. The power of the storytelling is such that we found ourselves weeping at the strangest times, our tears set off by a word, a gesture, an image that would suddenly cut through to the soul. Beautifully acted by a talented ensemble cast, and adroitly designed by Richard Hudson and directed by Patrick Marber, Leopoldstadt is a masterpiece.

In the rush to bring more diverse fare to the boards this season, a great many productions have suffered not, perhaps, from a lack of quality but from a lack of audience. See above. But, at least as far as Broadway is concerned, a lot of shows have also, perhaps, pushed the envelope too far beyond what Broadway audiences are willing to come out to see, even in the best of times.

How could the producers of Ain’t No Mo’ actually think they could fill the Belasco Theatre for a long run with a broad skit comedy about the expulsion of Afro-Americans from the United States? Off-Broadway, maybe. But Broadway? Without stars? Seriously? Perhaps jacked by the unexpected critical and commercial success of A Strange Loop, they thought this show would fly, but even after a Pulitzer and a Tony Award for Best Musical, A Strange Loop is now set to close — far earlier than other musicals that have won those kinds of awards.

Which brings us back to known quality. You want a great play? Check out just about any August Wilson show. Towering above the recent traffic jam of plays by Black writers, or starring Black actors, is the current revival of Wilson’s The Piano Lesson. It was hailed, previously, on Broadway and Off-Broadway, and the show’s return, clearly made possible by Samuel L. Jackson lending his star power to the cast in a supporting role, is a beautiful thing to watch unfold.

The Piano Lesson is, indeed, a lesson to be learned. This burnished production is great theater because it starts with a great play.

This is the show that Broadway needed most right now: a wonderfully crafted, outsized fun, old-fashioned musical comedy. This show, based on the Billy Wilder classic comedy movie that starred Marilyn Monroe, Jack Lemmon and Tony Curtis, moves like the wind, sings and dances with unadulterated gusto, has loads of laughs, and is a joy to watch. Simply put, it’s exactly the kind of Broadway musical people come to Broadway to see!

Kudos, especially to Mathew Lopez and Amber Ruffin for their book adaptation of the original screen material. They managed to make (to the degree possible) the diverse cast seem organic in 1933 America. This show does not purport to have color-blind casting, but rather it embraces everyone in the show for who and what they are and provides them cover within the script. That’s refreshing — and smartly done.

And oh that wildly talented cast led by Adrianna Hicks, Christian Borle, and J. Harrison Ghee, with superb support by Natasha Yvette Williams and Kevin Del Aguila. The music by Marc Shaiman is a wonderful pastiche of 1930’s styles, and the lyrics by Shaiman and Scott Wittman are smart and clever, and forever moving the story forward as they should. Finally, Casey Nicholaw’s choreography and direction just keep the show kicking from start to finish.

If there is a show that will anchor Broadway’s comeback this season, Some Like it Hot will be that show.

We originally found Mike Birbiglia, year ago, at a small theater downtown in a series of unique one man shows where we got to know all about him and his quirky (to say the least) problems. These shows were always a highlight of our theater seasons because Birbiglia was so funny, so charming, and so absolutely real on stage.

But when we received the announcement that he was going to be performing for a long run at the Vivian Beaumont Theater at Lincoln Center, NOW, in this moment of audience deprivation, we thought — OMG, how is he going to fill that huge theater every night for nearly 100 scheduled performances?

We needn’t have worried; the performance we attended was sold out. And Birbiglia didn’t disappoint. His new show, continuing his life story — which his ever-increasing audience is fully aware of —  including his dangerous sleep-walking issue, his tough but understanding wife, and now his young child — is filled with humanity, self-deprecating humor, and a sly understanding of what makes us tick (and what ticks us off).

For those of you who need to be wrestled to the ground in order to see a one-person show, trust us — no wrestling needed. You will love this show. It’s one of the best theatrical experiences of this or any season.

Best Off-Broadway Musical (Revival): A Man of No Importance

Oh, my, we saw the original musical at the Mitzi Newhouse Theater a long time ago. With a book by the great Terrence McNally, and music and lyrics by the still, underrated team of Ahrens & Flaherty, this exquisite show, directed at the Classic Stage Company by the ever-inventive John Doyle, will be hard to beat this year for Best Off-Broadway Musical because there isn’t a weak element to be found in this extraordinary, fluid production.

Let’s start with the pitch perfect Jim Parsons in the lead as Alfie, the Irish bus conductor, who lives to direct a little community theater in Dublin, circa 1964. A closeted gay man who lives with his sister (Mare Winningham, another stellar performance), Alfie lives a secret, tortured existence. But for all the poignancy in the piece, the show is funny, boisterous, and simply brimming with character and life. Two winning young stars, Shereen Ahmed and A. J. Shively, join Parsons and a rich cast of well-known, veteran theater actors, including Alma Cuervo, Mary Beth Peil, Thom Sesma, William Youmans and others — and you swiftly come to love all of these wonderful, idiosyncratic people.

A Man of No Importance has just recently closed after a critically acclaimed very successful run — and it has left its indelible mark on this Off-Broadway season.

Like The CSC, The Irish Rep is a subscription theater with a long and venerable history of serving its constituency of loyal, Off-Broadway theatergoers. It is to the Irish Rep’s credit that, earlier this season, they put on this touching, tender, and understated play by Joseph Dougherty titled Chester Bailey. It was a two-hander starring the brilliant Reed Birney and his talented, real-life son, Ephraim Birney.

Set on Long Island in 1945, it tells the intersecting story of a young man, Chester Bailey (Emphraim Birney) whose doting parents pull strings to get him a job at the Brooklyn Navy Yard in order to keep him out of the war. In an ironic turn of terrible luck, however, he suffers life-changing injuries at the navel yard. Enter Dr. Phillip Cotton (Reed Birney) who, only be chance, takes over Chester’s case in the hospital. What ensues is a story in which the doctor learns there is more to healing than the things he learned in medical school.

Chester Bailey is, at once, a heartbreaking play, to be sure, full of guilt, loss, and sadness, but it is also quietly redemptive, and gently understanding. The acting is superlative. The direction by Ron Lagomarsino is deftly supportive of his two actors. So glad we saw it because its haunting issues will stay with us long after this theater season is over.

Our next column will cover some of the shows that did not quite make this list of hit productions, and some that didn’t even come close.