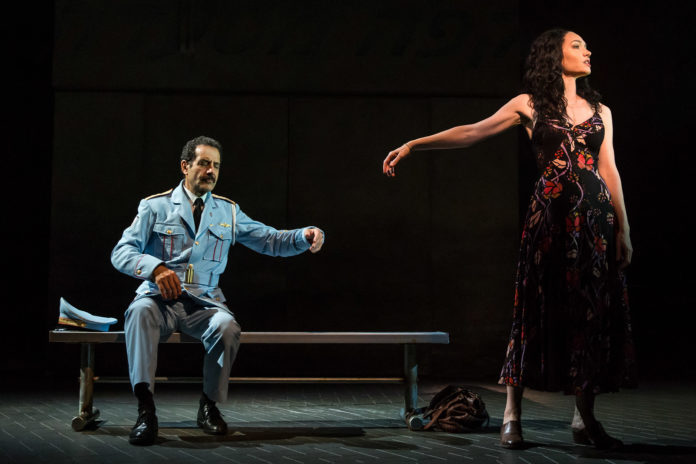 Sending a Message: From The Band’s Visit to Jerry Springer: The Opera There is a famous quote, usually attributed to the famous Hollywood film director Frank Capra, who said, “If you want to send a message, use Western Union.” Of course, Capra was one of the great message movie-makers of all time, with films to his credit like Mr. Smith Goes to Washington and It’s a Wonderful Life. So, what Capra really was saying was tell a great, entertaining story first, and your message, if you have one, will come through on the back end. With that thought in mind, let’s take a look at some musicals that are sending a message the way Capra intended…

It’s not your typical Broadway musical; no lavish production numbers and no fancy choreography with a squad of tap dancers, but The Band’s Visit is a critical hit that could reach commercial gold if it wins this year’s Best Musical Tony Award. And it is most certainly a musical with a message. The Band’s Visit tells the story of a low-level Egyptian police orchestra that mistakenly arrives at an isolated Israeli village instead of the city in which they are supposed to perform in a cultural exchange. While there is some tension and wariness between the Israelis and the Egyptians, the musical delves more deeply into their commonality. On a personal level, people on both sides of the divide, act like decent, caring people. And that is pretty much the point. Music is shared, kindnesses occur, respect is shown — and there is even a little bit of sex.

One could make the point that The Band’s Visit is a quieter, subtler, smaller scale version of Come From Away, at least insofar as both musicals are about the ways common people, from different cultures, come together to help each other in a crisis. The crisis in Come From Away was played out against the dramatic canvas of 9/11, but it was reduced, essentially, to giving food and shelter to people in need. The same is true for The Band’s Visit, if only for a day and a night — and only against the mundane backdrop of a transportation error.

Told with humor and poignancy, and buttressed with a combination of superior acting, a delicately detailed script, and a lovely score, The Band’s Visit sells its message of hope by smartly not overplaying its hand. The Arab/Israeli conflict is so excruciatingly intractable that any heavy-handed insistence on a solution would fall into the category of Frank Capra’s quote. But The Band’s Visit doesn’t insist on an answer; it doesn’t even raise the question of a solution, except insofar as what transpires before our eyes and that which opens our hearts.

Another kind of message musical could be found in the recent New Group production of Jerry Springer: The Opera. This is not a parody of the famous Jerry Springer TV show, but rather a springboard into an examination of what makes America — and Americans — tick. The show is a social commentary on our pre-occupations with fame, sex, and our seemingly endless need for scapegoats. The show is, indeed, operatic, to the point that it ultimately, becomes a battle between God and The Devil, and frankly neither entity seems up to their job descriptions — and that, too, is the point of the musical. As written, directed, and acted/sung – this is exciting, entertaining theater. The messages are flying fast, and they are on big, bigger, and the biggest themes, but this musical can carry the weight because the exuberant storytelling stays far ahead of the rush of ideas. Jerry Springer: The Opera is simply thrilling musical theater.

Happily, in today’s musical theater, we don’t need Western Union; we have talent. The messages are getting through as we cry, laugh, and applaud.