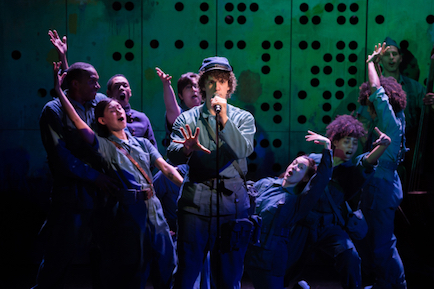 Like petals from trees showering New York City streets in the Spring, award season in the theater showers adulation, appreciation, and marketing hooks upon a wide variety of plays and musicals. As one award-giving group announces its winners, another is quick upon its heels to announce their own honorees. And so it goes, for weeks on end: the Outer Critics, The Obies, The Drama League, The Drama Desk, The Theater World Awards, The Tonys, and the list goes on, just like the beat. At a certain point, one is almost certain to hear the annual lament: “There are too many awards!”

But are there? Perhaps not. Because after each and every list is announced, there are the constant and ever-present cries of: “Look who they snubbed!” “I can’t believe they missed so-and-so!” “Those damn fools screwed up again!” But the beauty of this plethora of awards is that, almost inevitably, the mistakes one awards-giving group makes is rectified by the next awards group, even as that new group makes its own mistakes, only to be caught and fixed, if you will, by another.

For instance, in any number of categories, there are more worthy candidates than there are slots to be filled. If one group does the unthinkable and leaves out Dear Evan Hansen for Outstanding Book of a Musical (a no-brainer in our opinion), than surely it will get nominated by another group – and that’s exactly what happened this season. And most of the time, these catches, saves, and restoratives give us pause to consider the wide variety of opinions about the quality of work in today’s New York City theatre.

As longtime veterans of the award wars, we can tell you that once you reconcile yourself to the fact that all of the groups make their fair share of head-scratching decisions, you can calm down and consider the awards shows themselves and appreciate the classy ones. And perhaps the classiest of all is The Lortel Awards, which honors strictly Off-Broadway shows: no Broadway, no Off-Off Broadway. This season, they considered 105 shows and put on their usual high end, celebrity-attended, sophisticated awards show at the Skirball Center for the Performing Arts.

The Lortel Awards gets the best of both worlds, because it features a great many Broadway folks who have their roots in Off-Broadway – they come to present awards to the winners. And it honors that segment of the theater that traditionally offers the richest slice of art, combining serious style and content with only a whiff of commerce.

The awards show always begins with a brilliant dance performance that sets the tone for the show that follows. The presenters and winners both consistently give off the vibe of being honored and thrilled to be part of our community of theater artists – and the sincerity with which they speak doesn’t seem at all canned the way it often does at the uptown awards shows. In this way, the Lortels have much in common with the Obie Awards.

Finally, though, the Lortel Awards throws a great post show party in an expansive space in the same Skirball Center building. Most of the stars, win or lose, attend and the sense of inclusion, fraternity, and community is very real. The celebration of theater is felt from that opening dance number right through to the coffee and dessert at the end of the evening. In that sense, the Lortel Awards takes home the prize for best Award Show.