The Skivvies’ “Sleigh My Name” 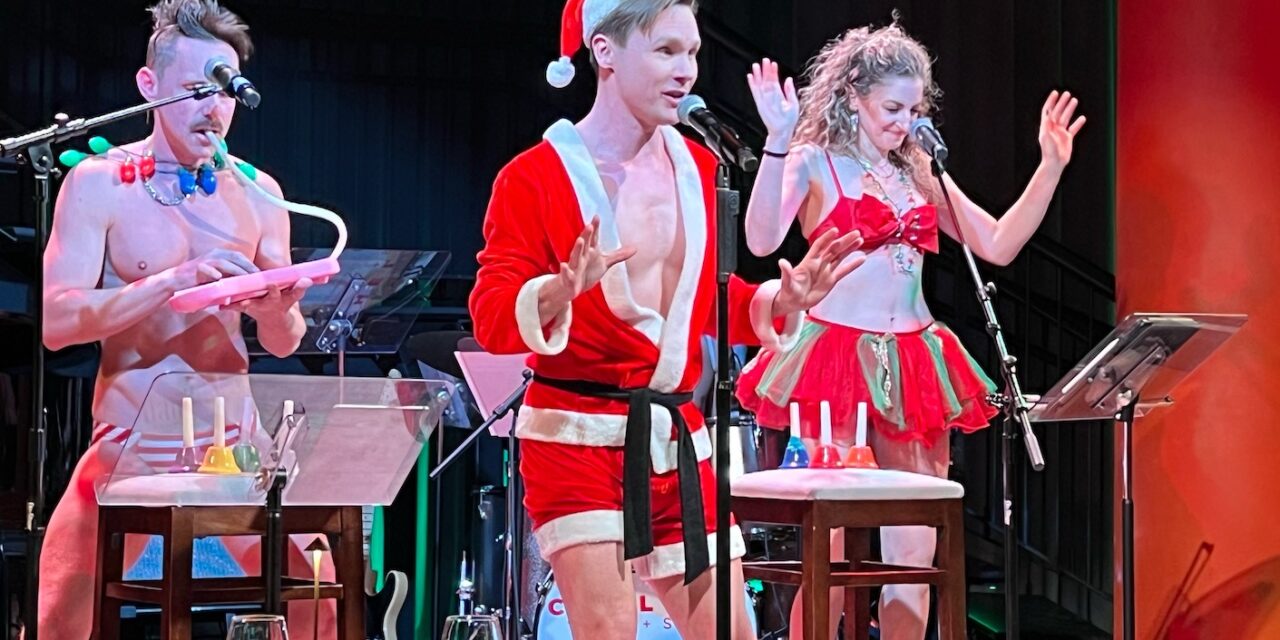 The Skivvies are back for the holidays with their new CD “Sleigh My Name,” appropriately timed to be the perfect stocking stuffer. Theater vets Lauren Molina and Nick Cearley have been performing in their skivvies (and as in The Skivvies) winter, spring, summer and fall for the last ten years in clubs around the country. As usual, I couldn’t wait to see what they would come as well as who the top-tier talents might be that would drop in on their show to warble in various stages of undress. Even members of the band takes off their clothes in what can only be described as a pajama party gone slightly off the rails. The fun factor is always at the heart of their merriment and the Christmas season is especially suited to their antics . . . as snug as a warm mitten.

As their website states, they perform “stripped-down arrangements of eclectic covers and eccentric originals. Not only is the music stripped down—cello, ukulele, glockenspiel, melodica—but The Skivvies literally strip down to their underwear to perform.” It’s a gimmick, sure, but one where their willingness to let it all hang out gives the audience the freedom to relax in a convivial atmosphere that, while tantalizing, isn’t as much sexual as it is homey. That is, if you like to walk around in your home with barely anything on.

And it’s as musicians that The Skivvies never disappoint. Not only in their clever and eccentric arrangements (which they do together), but the mashing together of songs in ways you might not think possible, forever keeping the audience on its toes (and ears). The succession of one oddball choice after another turn the show into a guessing game. And if you think it can’t get any crazier, that’s typically when it does. For example, how often will you hear John Kander and Fred Ebb’s “Colored Lights,” introduced by Liza Minnelli in The Rink, followed by Sting’s “Roxanne?” Or “Frosty the Snowman” having a genuine meltdown (in the form of guest singer Leslie McDonel) segue waying into “Turn, Turn, Turn” (there is a season).

Other turns came courtesy of Broadway diva Mary Testa (“Big Bulbs”), Michelle Dowdy as Mother Mary singing “Like a Virgin” (inappropriate, but appropriate, right?) that morphed into “Proud Mary,” and Seth Sikes, an elfish Santa Claus singing “Jingle Bells” that rarely stuck to that tune or its lyrics. The opener was provided by Juson Williams and the JW Inspirational Singers, who kicked the audience into high gear with a joyful medley of Christmas music.

Amy Hillner Larsen killed it with “Christmas Baby Please Come Home,” which dug deep back into the early 1960s with a song written when visionaries like Darlene Love, Ellie Greenwich and Phil Spector ruled the pop charts. Travis Kent, lit up like a Christmas tree (literally), going all out for a medley that was responsible for the Kander & Ebb/Sting mashup that also went full throttle into the Cars’ “Who’s Gonna Drive You Home?”

Lance Horne on piano, Rob Morrison on guitar and Josh Roberts on drums make for a merry band. And again, watching Cearley and Molina pull out instrument after instrument as if from Mary Poppins’ bottomless carpet bag, is a relentless progression of inventiveness. At the charming venue Chelsea Table + Stage, where the Skivvies are making their debut, “Sleigh My Name” adds up to a more than satisfying holiday treat.

The Skivvies performed Saturday December 17th and Sunday December 18th at Chelsea Table + Stage (152 West 26th Street, between Sixth and Seventh Avenues, in the Hilton Fashion District Hotel). Their new CD “Sleigh My Name” is available wherever you get your music. www.theskivvies.com