The Sorrows of Young Werther at Symphony Space 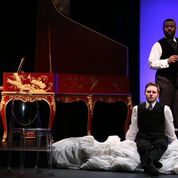 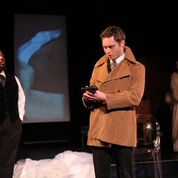 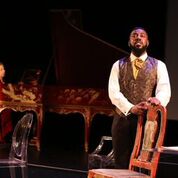 Ensemble for the Romantic Century admirably marries literature to classical music and their recent staged concert, The Sorrows of Young Werther, conceived by playwright and musicologist James Melo, demonstrates both the elegance and difficulty of their format. Blending established musical works from Schubert, Brahms, Liszt, Wolf, Mahler and Pfitzner with Goethe’s breakthrough first novel is a fine concept, particularly in this hybrid setting where concert, theater, and film come together for a full dramatic view of the title character’s romantic downfall. The production, unfortunately, rests on the concept and never quite gels into a compelling theatrical work.

Bobby Steggert carries the weight of the staged dramatic portion of the show, narrating as Werther and occasionally interacting with the singers in a dreamlike fashion during their performances. Steggert’s voice is ideal for narration, but he never feels entirely comfortable in the role, particularly having struggled with remembering his lines in the beginning of the performance I attended. While this human error is forgivable, Steggert never quite recovers as he recites Werther’s passionate and anguished lines with a consistently blank expression throughout. Donald T. Sanders’ uninspired staging makes Steggert’s disengagement all the more recognizable. Distracting films are projected in the background, contributing to a sense that the whole affair has been hastily thrown together.

While the dramatic portion leaves much to be desired, the musical element of the production is solid. Mezzo-soprano Rinat Shaham and baritone Sidney Outlaw are in fine voice as they tackle the classic works. They are accompanied on piano by Eve Wolf and Max Barros, and while two pianists seem excessive for the intimate space, their assured performances complement the vocal work and perk up an otherwise unconfident production. The success of the music suggests the possibility of better productions in ERC’s future with a more developed dramatic element.

The Sorrows of Young Werther played at Symphony Space on June 3rd and 4th.