The Sounds We Make 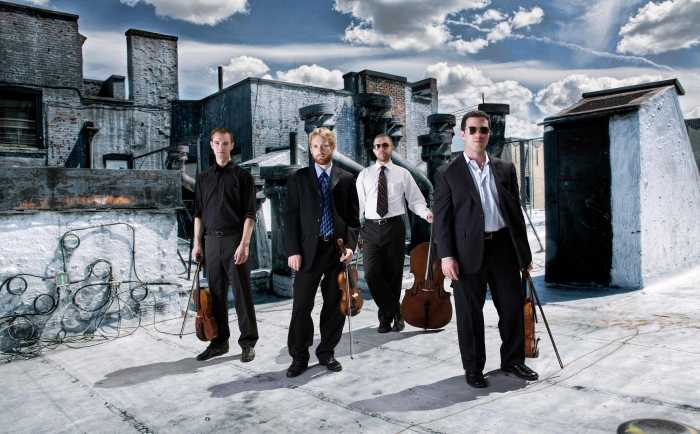 In Minimalist tradition, the back wall is covered with teal stripes of light. The visuals echo the music, filled with repetition and variation. Triple Quartet is an energetic piece, composed in 1998. In this year’s presentation, Conductor Brad Lubman is a centering force, cutting through the air, challenging the ensemble with fast tempos. Triple Quartet, originally commissioned by Kronos Quartet, is written for violin, viola, and cello, performed this year by Ensemble Signal and JACK Quartet.

The urgent repetition of the violin continues with WTC 9/11. This deeply theatrical composition includes recorded accounts about the tragic event of 9/11, in sync with instrumentation. The piece covers the moment of impact of the first plane and the second plane, as well as the citizens running from the catastrophe. The sounds ask us to recall the harrowing feeling and stunning disbelief of the tragic events. By rhythmically matching the sound of the instrument with the sound of the recorded human voice, we are asked to think and feel, as we interpret the distinction between the live and recorded sound. If people are instruments, and that is the sound we make when we cry and remember, for whom are we larger instruments? And why?

Steve Reich’s composition speaks to this dynamic question and others. When looking at two points in time, he analyzes how different moments command a different response pattern. In Different Trains, originally composed in 1988, Steve Reich, who is now 80 years old, considers perspectives about train travel from the late 1930s through WWII. His takes into account his own personal experiences, and a parallel experience that would have happened abroad. Regional accents highlight the New York to Los Angeles travel, juxtaposed with the voices of Holocaust survivors, recalling moments in Europe. The music is always moving – rapidly and fervently – with the theme of transport. With the voices are bells and whistles, competing with violins.

These compositions are part of a three day retrospective of Steve Reich’s music, called Reich/ Reverberations. With Reich’s composition, Sound Director Paul Coleman creates a sonic landscape that is astonishingly theatrical, bringing immediacy and specificity to moments in time.