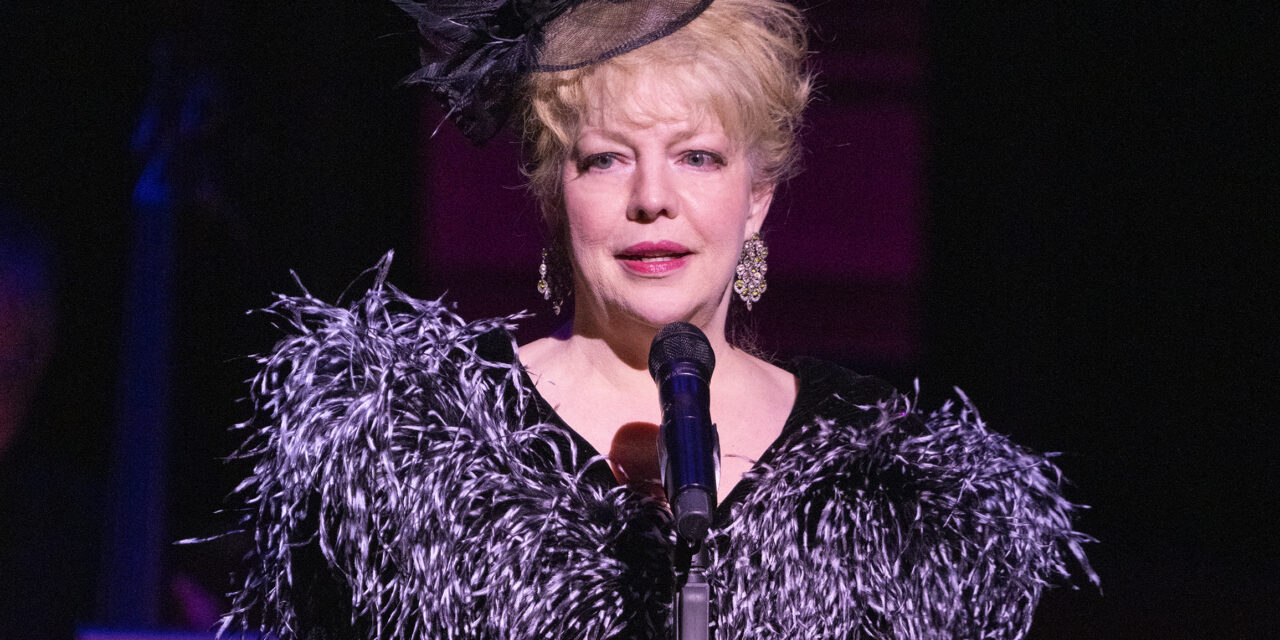 KT Sullivan, the artistic director of the Mabel Mercer Foundation, has been blessed with singular beauty and talent. She’s also capable, clever, cultured, graceful, impish, intelligent, luminous plus. Her exquisitely trained lyric soprano extracts every nuance from every word that passes over her lips. KT also has a luminous personality. She’s generous, welcoming, kind and helpful to colleagues and newcomers in any milieu in which she holds sway.  Helpful and supportive are not qualities found in abundance in the entertainment world. Countless performers have told me how KT’s generosity helped them get established when they were newcomers to the New York musical theater scene.

When the lights went up on the ultimate night of the 2022 Cabaret Convention, KT, accompanying herself at the Steinway, opened the evening with a gossamer version of the Noel Coward ballad, “Sail Away.” As she reached the final lines, “On the wings of the morning with your own true love,” memories of Steve Downey’s goodness and grace filled the hearts and minds of anyone who’d known KT’s husband of many years. Steve was a rare combination of handsome, smart and honorable. He’d died peacefully at his home in Charlottesville, Virginia in December with his son Jim and KT at his side. The evening also gave a fond farewell to the spirit of Charles Bullock, who’d worked closely with the Mabel Mercer Foundation and served as chairman of the foundation’s board of trustees until his death earlier this year.

The ensuring performances demonstrated the glorious triumph of humanity and artistry as one after another outstanding singer and musician sustained the brilliance that proceeded them on the same unbelievably high level.

Sandy Stewart and her illustrious son, Bill Charlap delivered a delicate interpretation of Cole Porter’s “It Was Just One of Those Things” as a shimmering ballad.

Tom Conway’s medley of George M. Cohan tunes with Jim Followell on piano reminded us of what fun vaudeville had been when the Irish feet were tapping and Irish eyes were smiling.

Chicago’s Spider Saloff, perky and mysterious, gave an account of how verses about the misadventures of a scampi worked its way up via Cole Porter to “A Tale of an Oyster,” a ditty destined to be heard with cocktails and canapes.

Phillip Officer returned to the fold with a forthright interpretation of Stephen Sondheim’s  “Anyone Can Whistle” which I doubted, at least not as well as that particular officer and gentleman.

Bob Russell aka Mr. Palm Beach brought back the really good old days with “September Morn” (Neil Diamond) making me recall how exciting dancing the night away was when you were pressed against a brand new attractive someone.

Hannah Jane obeyed orders to be fast and funny by dancing around the stage and blending “What Did I Ever See in Him” (CharlesStrouse/ Lee Adams) with “I Hate Men!” (Cole Porter), truly appreciated by the brilliant Jon Weber on piano.

However, the most beloved person in cabaret, Sidney Myer, countered Hannah’s complaints about the first sex by announcing “that in case you didn’t notice, I don’t hate men!” and presented the latest addition to his repertoire, “I’m Perfect!” (Phillip Namanworth) what else but perfectly. (Tracy Starch on Steinway or a reasonable facsimile)

Jillian Mustillo, this year’s Adela and Larry Elow High School American Songbook Competition Winner, sang about her ordinary boyfriend Bill in good Church-going young girl terms. I look forward to hearing her sing, after she enters college and actually finds someone who turns her on.

Fortunately, David LaMar, this year’s Julie Wilson Award Winner, all gussied up in sequins and feathers, had sexuality to spare and proved himself worthy of any award with his “If I Can’t Sell It, I Ain’t Gonna Give It Away” (Alex Hill/Andy Razaf, with Ben Covello – piano)

Karen Mason (Christopher Denny – piano) looking as wonderful with grey hair as she did as a blonde, brought us to the intermission with a subtle but heartfelt “Our Love is Here to Stay” (The Gershwin Brothers) which may also be a tribute to her own true love, producer/composer Paul Rolnick.

A regal Haley Smith opened Act II with her own loving tribute to Steve Downy and the song KT asked her to sing, “Through the Years” (Vincent Youmans/Edward Eliscu (Mark Hummel – piano) written when people actually stayed married.

Anais Reno who began gracing these stages as an adolescent, once again proved that the future of Cabaret is in capable hands with a perfect “Autumn Leaves” (Joseph Kosma/Johnny Mercer; Jacques Prevert) in French and English.

Kim David Smith upholds his Weimar vibe with what he called “Marlene Dietrich’s least favorite song,” “Falling in Love Again” (Friedrich Hollaender/Sammy Lerner, Tracy Stark – piano) in German and its inaccurate English sexless translation. He is always a pleasure to hear and watch.

Ben Jones angry “I Wanna Be Around” (Johnny Mercer/Sadie Vimmerstedt, Ron Abel – piano) indicated that he hasn’t yet learned to handle rejection. With his looks and his voice, I doubt that he has to handle it often.

Amra-Faye Wright’s showgirl “Hard Hearted Hannah” (Milton Ager/Jack Yellin, made me smile. Emma Pittman’s “Someone to Watch Over Me” (George and Ira Gershwin, Mark Hummel – piano) was less memorable. I have always admired Shana Farr’s artistry but “I Could’ve Danced All Night” (Alan J. Lerner/Frederick Loewe) should be sung by a besotted man. She has too glorious a voice to warble such lyrics.

To me, Marieann Meringolo’s approach to “Fifty Percent,” (Billy Goldenberg/Marilyn & Alan Bergman, Doyle Newmeyer – piano) takes a he/she love story to a home on the LGBTQ+ spectrum and lifted the convention to a superb level of artistry.

The prematurely sophisticated and beautiful Anais Reno’s “Autumn Leaves” (Joseph Kosma/Johnny Mercer; Jacques Prevert) sung in any language convinced me that the future of cabaret is in good hands.

Moipei – Mary, Maggie and Marta — make this trio company – made even the most exhausted cabaretniks reluctant to leave. Their lively arrangement of “It Don’t Mean a Thing (If It Ain’t Got That Swing)” by Duke Ellington with Jon Weber on piano was as uplifting as any deserving upbeat song.

One last comment, several bravos to the underpinning musician of this entire three-hour event, the miraculous pianist, Jon Weber. Anyone who did not bring along their own accompanist found their presentation greatly enhanced by his participation.

One last suggestion, having the introductions, commentary etc. for a three-hour show read by one person becomes a burden. Could it be split up between several readers, so it becomes less exhausting for a single host.