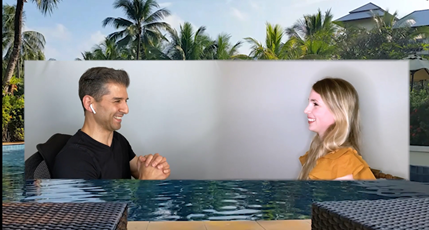 Where Will You Stand When Everything Changes? Barrington Stage Company Founder/Artistic Director Julianne Boyd announced that the entirely original new musical based on true stories, The Right Girl, will be presented for the first time on Sunday, November 1, 2020 at 2:00 PM at Barrington Stage Company, in Pittsfield, Massachusetts when a film presentation of its first performance will premiere before a live audience. Featuring music by 11-time Academy Awardnominee and Grammy®, Emmy® and Golden Globe® Award-winning songwriter Diane Warren, lyrics by Ms. Warren, Louisette Geiss and Howard Kagan, and a book by Ms. Geiss and Mr. Kagan, The Right Girl is directed and choreographed by five-time Tony® Award winner Susan Stroman.

Is she The Right Girl? Eleanor Stark’s entire life has been leading up to this moment: her first day as Chief Creative Officer of the legendary movie studio, Ambrosia Productions. As Eleanor rises to the top of her game working side by side for years with the industry’s most respected men, we learn that one of them has been abusing women all along. What role does she play in the story of Hollywood’s most fiercely guarded secret?

After sold-out runs in New York, Washington, DC, and Chicago, the smart and witty, political parody, Political Idol 2020, written by Robert Yarnall and Marc Emory, directed by Michael Goldfried, with music direction by Anessa Marie will debut its newest 2020 edition on October 27. Tickets are $20.20 and can be purchased on PoliticalIdolLive.com.

Tony and Grammy Award-winner John Lloyd Young will be doing John Lloyd Young’s Vegas Holiday on Friday, December 4 at The Space in Las Vegas. The 75 minute live streamed pay-per-view concert will begin at 6:00 PM PT and then be available OnDemand for one week following the live holiday event. The virtual VIP after-party will begin at 7:45 PM PT and include a talk-back, holiday surprises and an encore performance. www.thespaceIv.com

Missing the cinema? You can rent an AMC Theatre for private screenings. The rates start at $99 and increase to $349 depending on the movie, theater location and add-ons like food and beverage. It’s all available for a price. www.amctheatres.com  Gov. Cuomo says movie theaters outside New York City can open Oct. 23. We’ll see how that one goes!

Alas stage and screen star Rhonda Fleming died at age 97. She was in at least 40 films in the 40s/50s and called “Queen of Technicolor.” Ms. Fleming also appeared on stage on Broadway in 1973 in The Women.