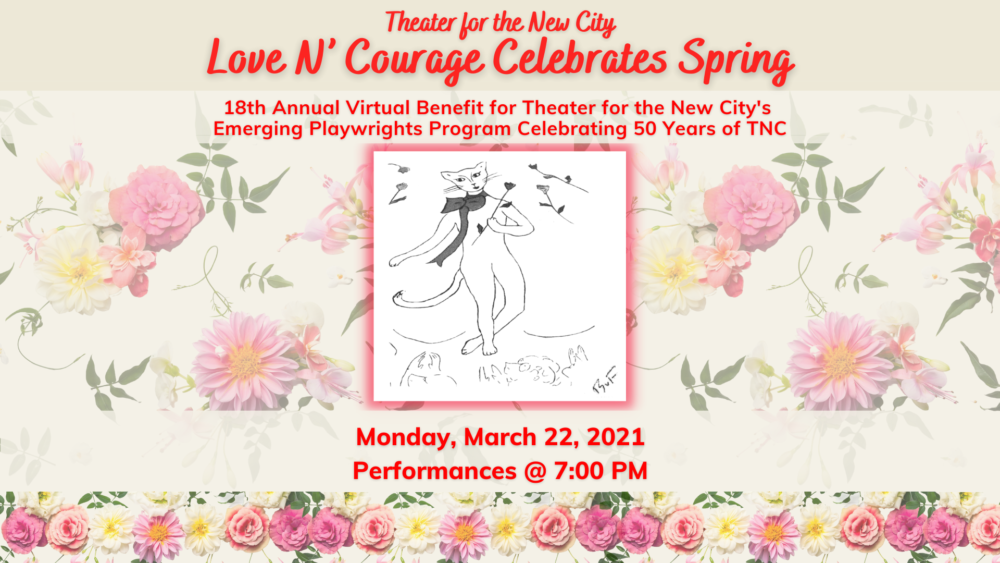 PlayhouseLive presents a special event Thursday, March 11 at 6:30 pm celebrating the classic Our Town. The evening features a conversation with Jane Kaczmarek and author Howard Sherman, with additional performances by Youssef Kerkour and Keith Randolph Smith. Sign up and log in at www.playhouselive.org

Ma-Yi Theater Company and WP Theater are pleased to present a reading of Stefani Kuo’s timely new play, Final Boarding Call, which centers on the 2019-2020 protests in Hong Kong. Directed by Mei Ann Teo (Jillian Walker’s SKiNFoLK: An American Show), the online event, designed by Hao, will take place on March 10 at 7pm ET and will be available on-demand until midnight on March 14 at https://ma-yistudios.com/. Reservations are required and donations are encouraged for this free event.

Theater for the New City, which turns 50 this month, will hold its annual “Love ‘N Courage” gala–a benefit for its Emerging Playwrights Program–virtually this year on Monday, March 22 at 7:00 PM.  The program will include performances by stars Phoebe Legere, Charles Busch, David Amram, F. Murray Abraham and Robert Gonzales, and Downtown luminaries, addresses by elected officials, a performance by students in the theater’s cultural arts program and highlights from the theater’s “Open ‘Tho Shut” weekly walk-by theater series, which will have played for 20 weeks by the date of the gala.  Tickets are $200 and available on the theater’s website, www.theaterforthenewcity.net.

PS CLASSICS,the label that celebrates the heritage of Broadway and American popular song, has announced the release of All the Girls – the new album from star Broadway vocalists Rebecca Luker and Sally Wilfert – on CD online and in stores today, Friday, March 5. It was released in digital and streaming formats in December. The album marks the final recording by Ms. Luker, a Broadway luminary for over 30 years, who passed away late last year.

Fusion Theatre NYC, Present a Live Streaming Event on Wednesday, March 17 at 7:30 pm of the play, “No Exit,” by Jean Paul Sartre  – – Three’s A Crowd (in Hell)! As part of the on-going St. John’s in the Village Live Streaming Series, Revelation Gallery will be the stage for “No Exit.”  Tickets/Donations range from $5-$100 and can be purchased here: HTTP://TIX.MUSAE.ME/NOEXIT

New York Theatre Barn will host A Seat at the Table: A Panel on Women In Theatre on Wednesday, March 24th, 2021 at 7PM EDT. The live virtual roundtable presentation will serve as a benefit for the non-profit organization that has served as a home for original musicals since 2007.  All of the features can also be viewed on 10glo.com thru Women’s History Month.

You’re invited to the live virtual launch party for  “Little Love Notes” an album by Elspeth Collard and Sam Rosenblatt. The event will be held on Zoom on March 13th, 2021 at 8 pm EST and is free for all.  To register, please click here. Join the writing team (plus some special guests) to be the first to hear their new album, “Little Love Notes from Collard & Rosenblatt.”  Hear about the inspiration for each piece, learn about the artists featured on the album.

ROMEO Y JULIETA, The Public’s bilingual podcast production co-presented with WNYC Studios, adapted by Saheem Ali & Ricardo Pérez González, based on the Spanish translation by Alfredo Michel Modenessi will be released Thursday March 18. Directed by Saheem Ali and featuring Academy Award winner Lupita Nyong’o and Juan Castano as the star-crossed lovers, all episodes of this Spanish and English audio play can be heard via WNYC’s podcast platform, The Public’s website, and wherever podcasts are available. www.publictheater.org

Where have many of Broadway’s young performers gone? To Sydney, Australia where live theater is thriving!  Approximately 97,000 thousand people rely on their livelihoods from Broadway. Young actors, singers, dancers, and live performance artists flock to New York City every year, fueled by the dream of a starring role on Broadway, the world’s biggest stage. They do anything to make ends meet working odd jobs, sharing tiny apartments, huddling in long lines to audition for just a handful of highly coveted roles.

If Australia is making it work, then we can only hope that Broadway will not be far behind.