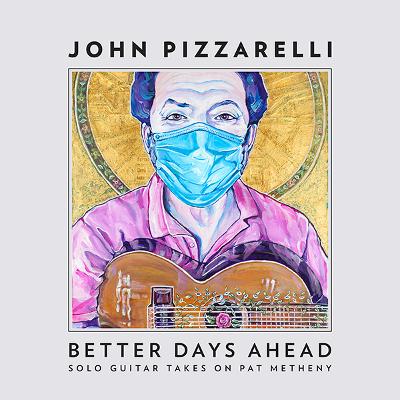 GHOSTLIGHT DELUXE, an imprint of Ghostlight Records, has announced that the new album from famed guitarist and recent Grammy Award winner John Pizzarelli, Better Days Ahead, will be available Friday, April 16 in digital and streaming platforms, and on CD via Amazon.com. In this landmark recording, one lauded guitar hero honors another, as Pizzarelli – in the first solo guitar album of his 5 decade career – explores the compositions of 20-time Grammy Award-winning composer and guitarist Pat Metheny. John will celebrate the album with a special edition of his weekly online concert program “It’s Five O’Clock Somewhere” on release day Friday, April 16. Starting today, customers who pre-order the digital album will immediately receive a download of the first single, “James.” A special video of the song is available on YouTube HERE. To pre-order the album.visit ghostlightrecords.lnk.to/pizzarelli-betterdaysahead

Glass Town, a new musical by Miriam Pultro (Comings and Goings) and directed by Daniella Caggiano (Fun Home). Presented by The Tank in association with The Center at West Park, Glass Town will premiere on March 19, 2021 at 7:30PM and runs through March 21, 2021 at 2:30PM ET. The production will be available for viewing on demand March 22-April 4, 2021 on CyberTank OnDemand, The Tank’s pay-per-view platform. Described as a rock requiem starring the Bronte siblings, Glass Town features Miriam Pultro as writer, “Charlotte,” keys and vocals; Katrien Van Riel as music director, “Emily,” bass and vocals; Eddy Marshall as “Branwell,” guitar and vocals; and Emma Claye as “Anne” and vocals. Additional band members include Matt DeMaria (Drums, etc), Anthime Miller (Cello) and Laura Zawarski (Violin), directed by Daniella Caggiano and features musical direction by Katrien Van Riel.

A Dozen Dreams – part theater, part art installation, live immersive experience, premieres at the Winter Garden at Brookfield Place (230 Vesey Street, NYC) on Thursday, May 13 for a limited engagement through Sunday, May 30. Presented by Arts Brookfield at Brookfield Place New YorkTickets will be available beginning April 19 by visiting engardearts.org.

Resounding, the immersive-audio entertainment company, announced today that the live outdoor performance and broadcast of the reunion concert of Triassic Parq: The Musical will play the theatrical drive-in experience Radial Park at Halletts Point Play, as part of the company’s month-long residency. Triassic Parq: The Musical, with music by Marshall Pailet, and book and lyrics by Pailet, Bryce Norbitz, and Resounding Creative Director Steve Wargo, will play for three performances only Friday, May 21, Saturday, May 22, and Sunday, May 23, 2021 at 8:00 PM ET, and runs approximately 90 minutes with no intermission. Original Off-Broadway cast members Lindsay Nicole Chambers (Velociraptor of Science/Omniscient Narrator), Brandon Espinoza (Mime-a-saurus), Wade McCollum (Velociraptor of Faith), Claire Neumann (T-Rex 2), Shelley Thomas-Harts (T-Rex 1), and Alex Wyse (Velociraptor of Innocence) reprise their roles in a revised version of the musical, which ran at the SoHo Playhouse in 2012 after a successful premiere in the 2010 NY International Fringe Festival. Tickets, starting at just $15, are now on sale at resounding.live/radialpark.

The beloved Tony, Grammy and Olivier Award-winning smash hit musical JERSEY BOYS returns to London’s West End, opening at the new multi-million pound reinstated Trafalgar Theatre, with performances from 28 July and an opening night of 10 August 2021. Performances through Christmas 2021 are on sale and JERSEY BOYS is now booking until 2 January 2022. www.jerseyboyslondon.com

Goode Productions has announced that their streaming production of Ryan McCurdy’s one-man Off-Broadway musical WHITEROCK CLIFF will be performed live at New York’s Funkadelic Studios for a five-week virtual run, with broadcasts starting March 24 and running through April 23. The show features a book by Ryan McCurdy (Once) and Ellie Pyle(Bespoke Plays), music and lyrics by Ryan McCurdy, and directed by Mary Chieffo (“Star Trek: Discovery”). Tickets are $20 and can be purchased HERE. WHITEROCK CLIFF weaves together memory, music, mental health, the creative process, the stories we tell ourselves, and the ones we tell to each other.

Adrienne Haan is back at the Triad Theater on April 2 for a hybrid show, both at the theater and watched by International audiences on the MetropolitanZoom platform.  She’ll have a monitor on stage with a virtual audience gallery as well as performing to a live audience in the theater.

The OBIE-winning HERE proudly presents the world premiere of The Visitation, a sound walk, a haunting site-specific experience created by Stephanie Fleischmann, Christina Campanella, and Mallory Catlett. A Sound walk takes listeners on an urban odyssey in Jackie Robinson Park via geo-located avant-pop songs that conjure a series of encounters with the buck. Launching on April 23, The Visitation is a meditation on the presence of the mythic in the everyday and the uneasy relationship between the built environment and the natural world.

Congrats to our friend Jim Brochu (actor, director, writer – Zero Hour) has written his first Murder Mystery.  It takes place set against the world  of vaudeville on the opening night of the Orpheum Theatre in L.A. The stage manager is murdered and the emcee of the show figures out who did it – Jack Benny. And now it’s available on Amazon in Kindle and Paperback. MURDER ON THE ORPHEUM CIRCUIT: A Jack Benny Mystery.