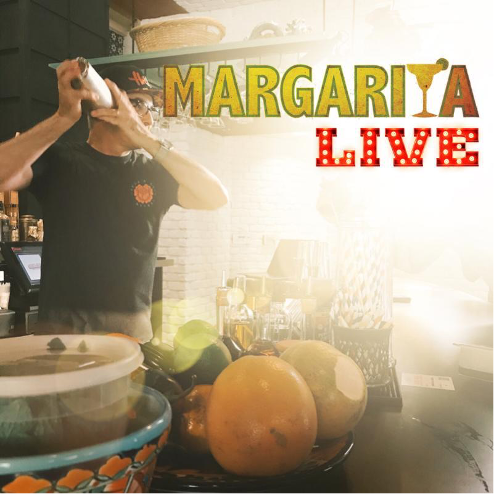 Celebrate “National Margarita Day” – Elevated Entertainment is pleased to announce Margarita Live, a captivating and tactile immersive telling of the legend of the Margarita cocktail and how it came to be a worldwide sensation. This will be a first of its kind production combining a Broadway caliber production with the world of mixology. Myths abound as to the invention of one of the world’s most famous cocktails, the Margarita. The truth is near.

The concept for Margarita Live is the brainchild of esteemed Latin-American Actor and Producer, René Lavan, and experiential events specialist, Don Alam. The duo approached Broadway veterans Executive Producer William Fernandez and three-time Tony Award-winning Producer Jim Kierstead, long-time collaborators of The Amparo Experience, which sold out an eight-month run at Miami’s The Real Havana Club in 2019. After a few tireless brainstorming sessions later, the plans for Margarita Live were set in motion. www.margarita.live
www.elevatedentertainment.com

As part of “New Federal Theatre Celebrates Black History Month,” Woodie King, Jr.’s New Federal Theatre (NFT) is offering a live streaming virtual reading of “Widows” by Mfundi Vundla on February 27 at 7:00 PM. The reading will be available on-demand through March 1.  This drama, originally presented by NFT in 1981, is about the struggle of three African women to overcome oppressive conditions in South Africa.

Launching March 21 two plays that discuss the experience of being a Latinx-American woman – –The Oxy Complex, Anna Lamadrid (Bless This Mess, Grey’s Anatomy) – Set during the 500th day of quarantine, Anna LaMadrid’s The Oxy Complex is a dark comedy exploring love, sex, loneliness, trauma, and the hormone that affects it all — Oxytocin, also known as “the cuddle” or “love” hormone. Anna is also the founder of this wildly popular coaching hub for actors.
Anyone But Me, Sheila Carrasco (Groundlings, The Good Place) – Sheila Carrasco dissects the psyches of women who struggle with self-identity, exploring the personas we create in order to get by. From the local grocery clerk, to your neighbor’s teenage daughter, to that lady from the cult — this play is about women who want to be someone they are not. Someone better, easier, stronger… anyone but them. www.iamatheatre.com

Ludic Proxy: Fukushima – a virtual production, written & directed by Brooklyn-based theater-maker Aya Ogawa, arrives in March timed to the 10th Anniversary of the Great East Japan Earthquake and subsequent nuclear disaster in Fukushima Prefecture.  Presented by Japan Society in association with PlayCo, this new version is an adaptation based on a section of Ogawa’s own play Ludic Proxy from 2015. Three “livestream” viewings will take place March 6, March 7 & March 11 — with ‘live’ virtual audience.  Following, the play will remain available for on-demand viewing through March 26. www.japansociety.org

New York’s Pop-Up Concerts Kicked Off With Jazz at a Vaccination Site” with jazz musician Jon Batiste sitting at a piano in an auditorium at the Javits Center on Manhattan’s West Side, performing for an audience of about 50 health care workers seated in evenly spaced rows — some wearing scrubs, others Army fatigues. … But about half an hour in, the performers stepped off the stage and exited the room, turning what had begun as a formal concert into a rollicking procession of music and dancing that grooved through the sterile building where hundreds of people came to get their vaccinations.

Alan Menken is busy with his Enchanted Sequel, Little Mermaid Remake, Night at Museum Musical” – Menken added that the sequel to Enchanted was basically started during the pandemic and now ready to start filming.  He  discussed working with Lin-Manuel Miranda to bring The Little Mermaid to the live-action big screen saying, “There is some rapping in it and I really can’t take much credit for the rap aspect of it … But it’s all the blend of Menken-Miranda.”

Upon These Shoulders announces new additions with Tony winners Whoopi Goldberg, André De Shields, and George Faison joining the streaming concert. More additions include: Lilli Cooper, Tituss Burgess, Michael R. Jackson. As previously announced, the special is presented by Black Theatre Coalition in partnership with Playbill. Upon These Shoulders begins streaming February 27 at 8 PM via On the Stage. Click here for tickets.

To register for Forestburgh’s Diamond Delirium or to donate, visit https://www.fbplayhouse.org/diamond-delirium