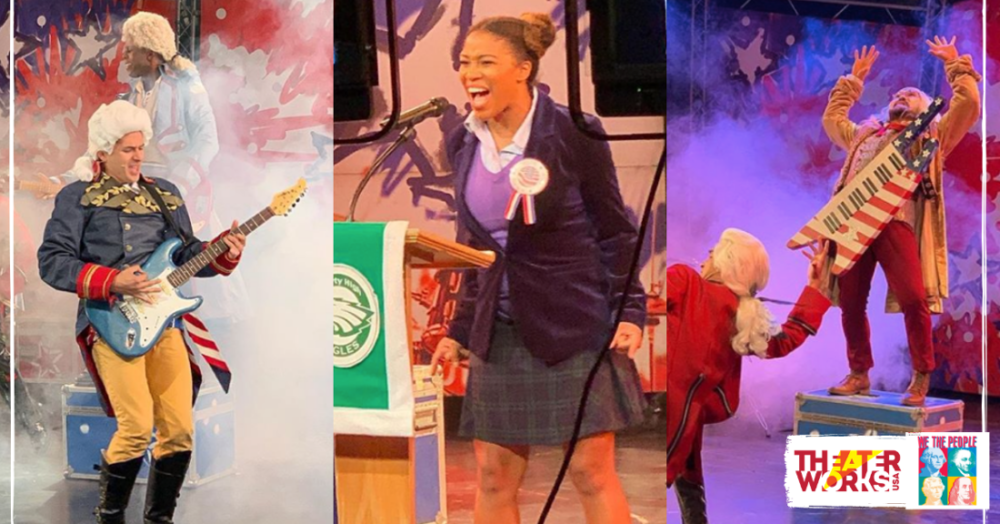 TheaterWorksUSA fully staged, socially distanced live production of their Lortel nominated Off-Broadway musical, WE THE PEOPLE: AMERICA ROCKS! Filmed live (without an audience) on the Paper Mill Playhouse stage on October 4, and produced in association with Paper Mill Playhouse, the capture will be streamed to families across the country prior to Election Day and made available to schools and theaters through the academic year.  The recording will premiere on Stars in the House at 8pm ET on October 24.

Rock out with America’s original “boy band” — The Founding Fathers! Join George Washington, John Adams, Thomas Jefferson and Benjamin Franklin as they trade in their powdered wigs for power chords to help an ambitious teen. On a quest to win her school election, Dawn cares more about padding her college applications than making her school a better place. With the help of these Fab Four, she discovers that “We the People” have the power to raise a patriotic ruckus and make a difference!

The Nightmare Before Christmas, Disney’s classic animated film, as interpreted by some of Broadway’s most ghoulishly talented artists. The evening will be presented by Tony Award winner James Monroe Iglehart, in cooperation with Tim Burton, Danny Elfman and Disney Music Group, for Lymphoma Research Foundation. The terrifyingly tantalizing one-night-only event will be available to stream on The Actors Fund Vimeo Channel. on Saturday, October 31 at 7 pm ET. For details and to purchase tickets ($4.99), visit http://actorsfund.org/TNBC. www.lymphoma.org

Theater for the New City’s Village Halloween Costume Ball, a revered Village tradition that frequently welcomes over 1,200 revelers, will be presented virtually this year with most of its key traditions preserved.  Notable artists including Everett Quinton, F. Murray Abraham, Austin Pendleton, Phoebe Legere and Penny Arcade will appear along with over 100 other performers. A wide variety of multi-arts events is promised, including cabaret shows, music for dancing, radio plays, kids’ attractions, an art exhibit, I Ching readings, a scream contest, a costume judging and a vicious and sexy late night cabaret.

The celebration starts at 2:00 PM October 31 and everything will be streamed on the theater’s website (www.theaterforthenewcity.net) and its Facebook page (https://www.facebook.com/theaterforthenewcity).   Only new works will be presented.  All events will remain posted about a week, until they are archived. Attendance will be free but donations will be gratefully accepted.

This is the 44th year for the colossal event.  It began in 1976, launched many prominent downtown performance acts and styles through the years, and even spun off the Village Halloween Parade.

TikTok personality Natalie Weiss (Everyday Rapture, YouTube’s “Breaking Down the Riffs”), and Emmy Winner & Grammy Nominee Felicia Boswell (NBC’s Jesus Christ Superstar LIVE, Shuffle Along, Motown), two stars from the Original Off-Broadway Cast of EMOJILAND (the critically acclaimed new musical which was cut short in March due to the Broadway shutdown), have reunited virtually to perform the song “Stand For,” supported by one hundred singers and musicians from coast to coast. 100 singers and musicians join this moving rendition. YouTube: https://www.youtube.com/watch?v=gThfosYz6k0