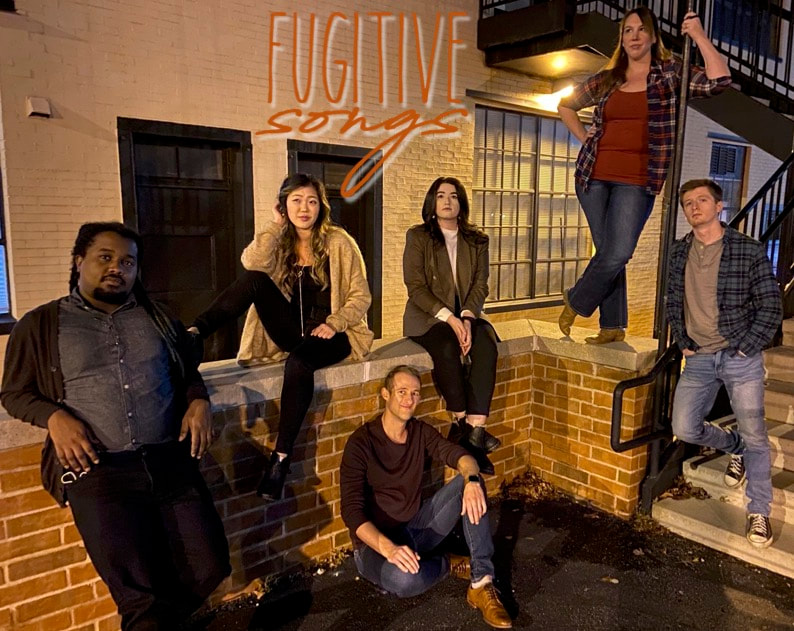 NiCori Studios continues to inspire and entertain through Covid-19 helmed by Corinna Sowers Adler and husband Nicholas Adler. Corinna is a respected voice teacher and performer working with kids in theater, helping them reach their goals. Nick has been the familiar face at Jazz at Lincoln Center (in its former incarnation) as house manager, administrator, producer and more who is temporarily on hiatus, working closely with his talented wife.

The Escape centers on two men on the run, in a time of political unrest and uncertainty, who take shelter in a warehouse after killing a political figure.  They are waiting for their contact from a revolutionary group to get them money and fake passports when a mysterious woman shows up and offers to help them get away, but can they trust her? Register in advance for this webinar:
https://us02web.zoom.us/webinar/register/WN_WpNjz2PXQCioMyXdFzmQ9A   Donation:  $15.00 to benefit the Riant Theatre.

Springfield Contemporary Theatre presents Award-winning songwriters, Chris Miller and Nathan Tysen‘s Fugitive Songs, a 19-song journey across America. This innovative show, conceived as half-musical/half-hootenanny, spotlights people on the run: a disgruntled Subway sandwich employee, a jilted ex-cheerleader, a pair of Patty Hearst fanatics, a stoner forced to rob a convenience store against his will and so many others. Blending traditional folk music with contemporary pop and gospel, Fugitive Songs offers a new sound for a restless America. live, digital opening night event on Thursday, February 11 at 7pm CT. The production, created specifically for streaming, is available online February 11-14.  Visit bit.ly/SCTFStix or call the box office at 417-831-8001

Women’s Day on Broadway: In celebration of International Women’s Day, Disney on Broadway announces the 4th annual “Women’s Day on Broadway” will be held virtually on Friday, March 12th, 2021, beginning at 1 pm EST. Following its launch in 2018, this year’s event coincides with the one-year mark since Broadway’s shutdown due to the COVID-19 pandemic. The event themed “Reflecting Courageously, Transforming Collectively” will continue to engage attendees of all gender identities and expressions in a two-hour virtual event about gender equality in the theatre industry and beyond. For more information, visit the home for Women’s Day on Broadway, www.WomenOfBroadway.com and @WomenOfBroadway

February run of TAPE is FREE.  Grab a seat and spread the word. Performances will be Fridays and Saturdays, Feb 5, 6, 12, 13, 19 and 20 (8 pm ET). Riveting intimacy, power and impact of a new theatrical medium. Get your free reservation here: www.TheSharedScreen.com/tape.

MasterVoices, under the artistic direction of Ted Sperling, will present Work, the second chapter of its central project for the 2020-2021 season: a four-part virtual rollout of award-winning composer Adam Guettel’s theatrical song cycle, Myths and Hymns. Conceived and supervised by Mr. Sperling, this free digital production will be offered starting on Wednesday, February 24 at 6:30 PM ET on mastervoices.org and the ensemble’s YouTube channel.

Audible’s much-anticipated second and third installments of The New York Times best-selling, multi-part original audio drama series, The Sandman: Act II and The Sandman: Act III, have been greenlit. The announcement follows The Sandman’s 2020 hugely successful debut, which broke records for the most pre-orders of any Audible Original title and earned the distinction of being the best-selling Audible Original in the company’s history. The Sandman also occupied the #1 spot on The New York Times Best Seller Audio Fiction list in July 2020 and August 2020. Based on The New York Times best-selling graphic novel series, The Sandman, written by Neil Gaiman and published by DC, The Sandman: Act II and The Sandman: Act III will again be adapted and directed by Dirk Maggs and narrated by Neil Gaiman, who will also return as creative director and co-executive producer. The first installment of Audible’s The Sandman, which adapts volumes 1-3 of the graphic novel series of the same name (Preludes & Nocturnes, The Doll’s House, and Dream Country), debuted in July 2020 and is available exclusively on www.audible.com/thesandman. This second installment will adapt Season of Mists, Distant Mirrors, A Game of You and Convergence from the graphic novel series and the third installment will adapt Brief Lives and Worlds Ends, diving deeper into the world of The Sandman.

Japan Society presents, in association with PlayCo, the virtual production of Ludic Proxy: Fukushima, written and directed by the Brooklyn-based theater-maker Aya Ogawa.  Based on her own play Ludic Proxy, commissioned by PlayCo and first performed in 2015, this upcoming digital theater event represents a virtual reimagining of the original play’s second act commemorating the 10th Anniversary of the Great East Japan Earthquake and subsequent nuclear disaster in Fukushima Prefecture.  This online iteration will be live streamed Saturday, March 6 at 9:30PM EST; Sunday, March 7 at 4:30PM EST; and Thursday, March 11 at 8:00PM EST.   www.japansociety.org

13th Street Repertory Theatre Needs Your Help: Following the death late last year of Edith O’Hara, the founder of the 13th Street Repertory Theatre, Village Preservation urged the Landmarks Preservation Commission to consider landmark designation of 50 West 13th Street, the more than 170 year old rowhouse which has housed the theater since its founding. located Located here since 1972, it launched the careers of Bette Midler, Barry Manilow, Chazz Palminteri, Richard Dreyfus, Christopher Meloni, and many others. It was also the home of the longest running play in Off-Off Broadway Theater history, Israel Horovitz’s Line.

Part-owners of the building had sought to demolish it in years past, eventually agreeing to leave the building as is for the duration of O’Hara’s life.  We want to ensure the building’s continued survival, and have received support for our landmarking proposal from Borough President Gale Brewer and Community Board #2.  However, the Landmarks Preservation Commission has so far resisted, so more pressure is needed.