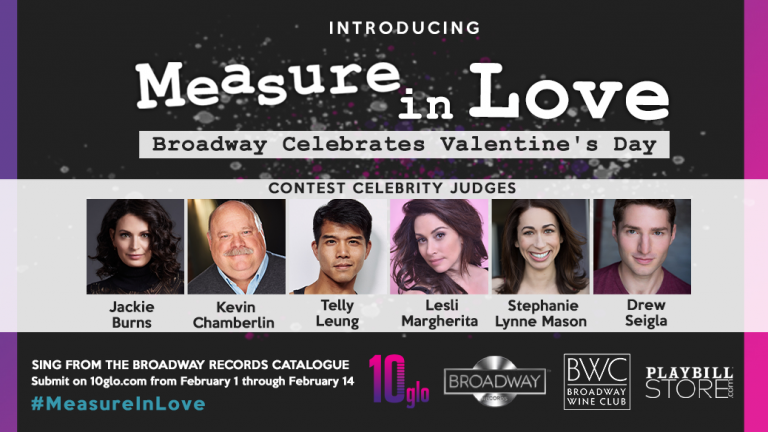 10glo and Broadway Records are thrilled to announce their partnership for a love song contest Measure in Love: Broadway Celebrates Valentine’s Day, featuring Broadway favorites Jackie Burns (Wicked, If/Then), Kevin Chamberlin (Seussical, The Addams Family), Telly Leung (Rent, Aladdin), Lesli Margherita (Matilda the Musical, Emojiland), and on stage-turned-real life theater couple Drew Seigla (Fiddler on the Roof in Yiddish) and Stephanie Lynne Mason (Fiddler on the Roof in Yiddish) as judges. After an exceptionally lonely year, 10glo and Broadway Records are celebrating Valentine’s Day by encouraging artists to embrace the power of love. To participate, entrants should film a video singing any love song from the Broadway Records catalog – either as a solo or a duet – and upload to 10glo.com between today (Monday, February 1) and 11:59 PM ET on Sunday, February 14 using the hashtag #MeasureInLove.

The judges will choose a favorite solo performance and duet. The winning artists will receive a Valentine’s Day care package with gifts from Broadway Records and sponsors Broadway Wine Club and Playbill Store. All official rules and details can be found on the 10glo website.

Broadway On Demand, has announced that due to popular demand, the online world premiere of The Play with Rocky Bleier, an intimate portrait of famed Pittsburgh Steeler, four-time Super Bowl Champion and wounded warrior, Rocky Bleier will extend its streaming through Super Bowl Sunday, this Sunday, February 7, 2021. The Play with Rocky Bleier, written by Gene Collier and directed by Scott Wise, was filmed in late 2019 at the Lincoln Park Performing Arts Center in suburban Pittsburgh, Pennsylvania and is an intimate portrait of Rocky Bleier’s multi-faceted career as four-time Super Bowl Champion, wounded warrior, family man and community activist.

The Town Hall (www.TheTownHall.org) is pleased to present a special streaming concert event with music icon Judy Collins as she recreates her legendary 1964 New York City concert hall debut. Collins filmed the show onstage at The Town Hall and will be streamed on February 12 at 8pm EST. Tickets are $40 and are available at www.TheTownHall.org.

International City Theatre opens its 36th season with a virtual presentation of Art, a heady, hilarious look at the bonds of friendship viewed through the prism of modern art. Yasmina Reza’s multiple award-winning play, translated from the French by playwright/screenwriter Christopher Hampton, begins streaming on Thursday, Feb. 18 and will remain available on demand every Thursday, Friday, Saturday and Sunday through March 7 (dark Mondays, Tuesdays, Wednesdays). Tickets are $30 per household and are available for purchase now at www.InternationalCityTheatre.org.

What’s Tik Tok up to now? Everything you never knew you needed to know about your favorite Broadway musicals! Brett Boles, an award-winning musical theatre composer/lyricist, high school choir teacher, and longtime member of the BMI Lehman Engel Musical Theatre Workshop has launched a new series on TikTok called “The M. Tea.” In one month’s time, it has amassed a following of over 22,000 with more than 40 episodes released.

The Susan Smith Blackburn Prize has announced 10 Finalists for 2021 for its prestigious playwriting award, the oldest and largest prize awarded to women+ playwrights. Chosen from an international group of over 160 nominated plays, the Finalists are:  Glace Chase (Aus/US)Triple X, Erika Dickerson-Despenza (US) cullud wattah, Miranda Rose Hall (US) A Play for the Living in the Time of Extinction, Dawn King (UK) The Trials, Kimber Lee (US) The Water Palace, Janice Okoh (UK) The Gift, Ife Olujobi (US) Jordans. Frances Poet (UK) Maggie May, Jiehae Park (US) The Aves, Beth Steel (UK) The House of Shades.

The Winner, to be announced at the beginning of April.