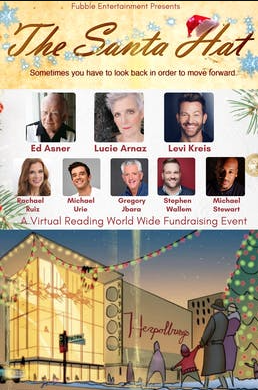 Isaac Mizrahi presents the second show of his virtual concert series, ISAAC@CAFECARLYLE, full of stories and songs, delivered right to your living room. The show will premiere on January 8 at 8pm with special guest Jackie Hoffman. Filmed (without an audience) at the New York City landmark Café Carlyle, the show is being presented on the BroadwayWorld Events pay-per-view streaming platform. Two additional completely unique shows will be released on February 12 and March 19. The shows will kick off with a live premiere event, featuring a special chat, which will include Mizrahi himself, and then will be available on demand for 30 days.Tickets:  www.events.broadwayworld.com

Swingin’ the Dream – First performed at The Center Theatre, Broadway in 1939, Gilbert Seldes and Erik Charell’s jazz-infused version of A Midsummer Night’s Dream is widely regarded as one of the most ambitious and intriguing Broadway musical adaptations of Shakespeare of all time.Saturday January 9th at 2 pm. FREE, reservation required.

This event will be streamed live from the Royal Shakespeare Theatre in Stratford-upon-Avon TFANA – Reserve HERE.

It’s never too late to listen to the Prince of Cabaret, Steve Ross. Here’s a note from him: Dear friends and fans of the Master,

In 1999, at the behest of the then Program Director for the Library of the Performing Arts at Lincoln Center Alan Pally, I had the enviable task of assembling a stellar cast to present an evening in celebration of the centenary of Noël Coward’s birth. Everybody was in it, and everybody was there! A highlight for me was playing the piano overture with the great Broadway dance arranger, musical director and pianist, Peter Howard. Here, for your listening and dancing pleasure, as they used to say, it is. Happy Birthday (a bit belated) Noël! Listen HERE.