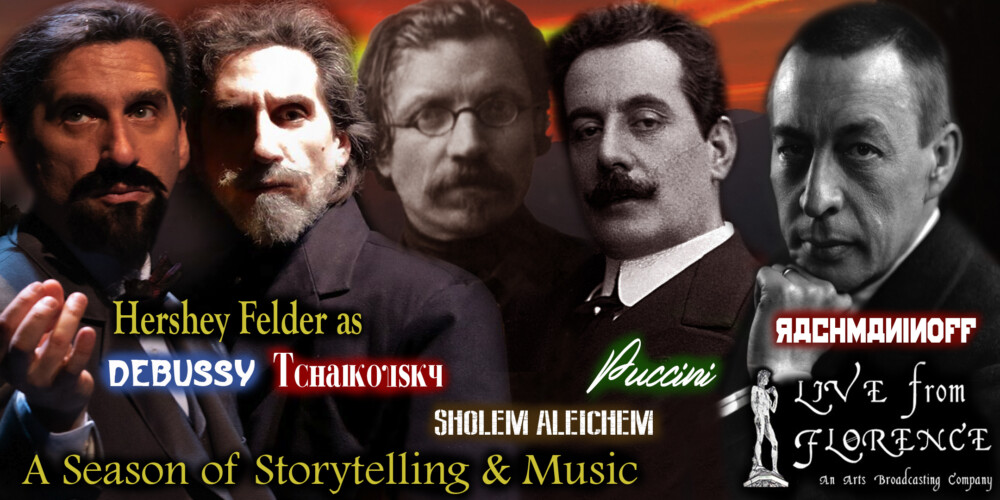 Following the worldwide success of the live streaming productions of Hershey Felder as Irving Berlin, Hershey Felder: Beethoven and George Gershwin Alone, which raised vital funds for dozens of U.S. and international theatres and arts organizations, virtuoso playwright, performer and pianist Hershey Felder is pleased to announce his 2020-2021 season of broadcast productions. The shows, which will be newly created for the screen and then streamed live from locations in Florence, Italy, and Paris, France, are produced via the arts broadcasting company, Hershey Felder Presents – Live From Florence, with information available at www.hersheyfelder.net.

The 2020-2021 season will include the critically acclaimed hit shows, Hershey Felder as Claude Debussy in A Paris Love Story (premiering November 22, 2020) and Hershey Felder: Tchaikovsky (premiering December 20, 2020), both newly adapted and expanded versions of Felder’s original works for the stage.  Felder will also create and perform in the World Premieres of Before Fiddler (premiering February 7, 2021), creating the role of the great Yiddish author Sholem Aleichem, whose works inspired the classic musical Fiddler on the Roof. This premiere production will also feature the dazzling Florence-based klezmer music ensemble, Klezmerata Fiorentina; Puccini (premiering March 14, 2021), about the scandalous life of the great Italian composer, Giacomo Puccini, and featuring music from La Bohème, Tosca, Turandot and more; and Anna & Sergei (premiering May 16, 2021), about the strange, true life meeting in New York between composer and pianist Sergei Rachmaninoff and Anna Anderson, the woman who claimed to be the sole surviving member of the Romanov Dynasty, the Princess Anastasia. This production will feature Rachmaninoff’s most beloved melodies and music.

Each production will be live streamed and subsequently available on demand for viewers for one week after the premiere. A full season pass, with access to all five announced productions, is currently available here: SEASON PASS.

Ma-Yi Theater Company and WP Theater are pleased to present a live reading of Stefani Kuo’s timely new play, Final Boarding Call, which tells the stories of the current Hong Kong protests. Directed by Mei Ann Teo (Jillian Walker’s SKiNFoLK: An American Show), the live reading will take place on November 20 at 7pm ET and will be available on-demand until midnight on November 24 at https://ma-yistudios.com/. Reservations are required and donations are encouraged for this free event.

Vin Morreale, Jr. and Eric B. Sirota are pleased to announce the release of their new full-length musical comedy, “A Day at the White House”, on podcast and streaming platforms.  “A Day at the White House” was written by Vin Morreale, Jr. (book & lyrics) and Eric B. Sirota (music).
Imagine the mayhem when the classic comedians of the early 20th Century together on one stage, each with their unique brands of comedy stylings.  Thrown against the backdrop of the ultimate slapstick zaniness – the American political establishment.  After a close national vote is deadlocked in Florida, Crenshaw Sparx is appointed President of the United States, surrounded by all the clowns, comedians and con artists that not-so-subtly reflect today’s political environment.
Characters include Crenshaw, Cheato & Hobo Sparx; Bo, Barry & Curby; Cabot & Oddfellow; Mae Waist and W. Z. Fielding.
A “radio-play” full-length musical which includes 16 songs is available to be streamed for free at the following link: https://ericsirota.com/Whitehouse/  Donations are greatly appreciated
For inquiries, please contact WhiteHouse@EricSirota.com

NiCori Studios & Productions in partnership with the award winning Frungillo Caterers presents MUSIC AT THE MILL at The Inn at Millrace Pond in beautiful Hope, NJ. Performances include full dinner or brunch and a live, socially distant performance by one of today’s top Cabaret or Broadway performers.

Saturday, November 21 will feature the BroadwayWorld award winning singer, Lisa Viggiano with her Bruce Springsteen tribute show “Magic In The Night“. Two seatings are available for a socially distant dinner and performance. Sunday, November 22 will feature Broadway’s own Ty Stephens. Brunch will be full of Standards from Stage and Film, along with some delicious R&B/Jazz

Online Premiere: ANNA BERGMAN – YOU’RE ALL THE WORLD TO ME:A Musical Travelogue from Porter to Puccini FRIDAY,  OCTOBER 30TH @8 PM EDT. PRE-ORDER NOW: This concert will be available online for a short time after  this premiere date. $25.00 to view via Vimeo

“Closet Works” is a series of short dance-based works performed by Gelb from a closet inside his East Village apartment that has been transformed into a white box theater. In addition to McLaughlin, previous editions have featured the choreography of Paul Taylor Dance Company alum Francisco Graciano, award-winning choreographer and director Raja Feather Kelly (A Strange Loop), Afra Hines (Hadestown) and Damani Van Rensalier (Hadestown). A special night-before-the-election edition of “Closet Works” on November 2 will focus on efforts to get out the vote and include guests Sunny Hitt and Veronica Jiao. November 30 features French choreographer Van-Kim Tran. Closet Works is presented by the Invisible Dog Art Center with additional support from Mamie Kanfer & Justin Stewart.

New York City Center President & CEO Arlene Shuler today announced the 2020 Gala presentation will take place on Wednesday, December 9 at 7:30pm (pre-show events begin at 6:30pm). Supporting the historic midtown theater founded for the people of New York, this special benefit performance titled An Evening with Audra McDonald will be filmed live on the City Center stage and presented digitally only at NYCityCenter.org. The Gala concert will be available on demand for one week only through Wednesday, December 16. Funds raised by all streamed performances will ensure City Center is able to continue its founding mission to provide access to the best in the performing arts to the widest possible audience and to support artists with new opportunities to create and perform.