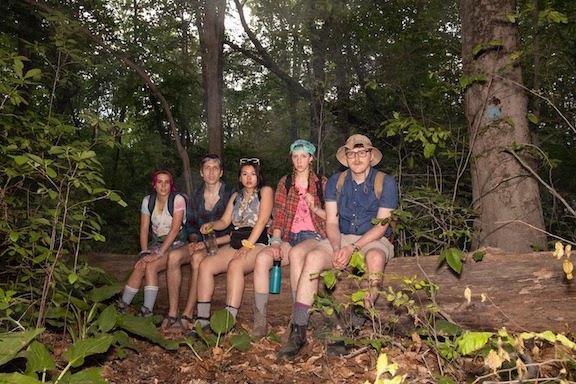 The Grown-Ups, an immersive theatrical experience created by Nightdrive and performed outdoors around a campfire for six audience members at a time, will premier in a secret North Brooklyn location beginning Friday, July 30th for a summer engagement through September 19th. Official opening is Sunday, August 8th at 8:30pm.

The campers are all finally asleep, and the lake is getting quiet. Have a beer, make a s’more, tell a scary story. Figure out what you’re going to have to do in the morning to keep camp fun and safe without letting the kids find out about…well, you’ve seen the news. I just got a push notification—they’re getting closer.

York Theatre’s online auction has begun – “Uniquely York!”Auction: What I Bid 4 Love.”  Some of the items include a framed photograph of Alan Jay Lerner & Frederick Loewe, with autographs of both; LP of “The Cole Porter/George Gershwin Suite” signed by Gershwin, Porter & Louis Levy;  Sheldon Harnick’s handwritten “In My Own Lifetime” from The Rothschilds and many more. www.yorktheatre.org

Beane will direct the cast which features, in order of appearance, Mo Rocca (“CBS Sunday Morning”, Spelling Bee), Alfie Fuller (BLKS), Jackie Hoffman (Xanadu, Fiddler on the Roof in Yiddish), Kuhoo Verma (Hulu’s “Plan B”, Octet), Ann Harada (Avenue Q), Jamen Nanthakumar (The Kill One Race), Julie Halston (Tootsie, The Divine Sister), Brooks Ashmanskas (The Prom) and Jason Tam (Be More Chill, Lysistrata Jones). Additional casting will be announced. Performances will run Tuesdays through Thursdays at 7:30pm, Fridays at 8:00pm, and Saturdays and Sundays at 2:00pm and 8:00pm. Tickets are available now starting at $35 on www.FairycakesThePlay.com; and the TodayTix® app.

Van Gogh: A New Musical announces the addition of Celine Snippe as librettist and lyricist. The Creative Team also consists of Will Nunziata (Co-creator / Director), Rachel Bertone (Co-creator / Choreographer), Eric Fegan (Composer), and Emily White (Devising Dramaturg). Additional creative team members will be announced soon. The creatives will be developing the show over the summer and fall with a 2022 industry presentation expected.

“Van Gogh: A New Musical will explore the life of the famous painter Vincent van Gogh as never told before. A promotional reel for the show can be found here: https://youtu.be/qNvKSoDr-Pw     www.vangoghtheatrical@gmail.com