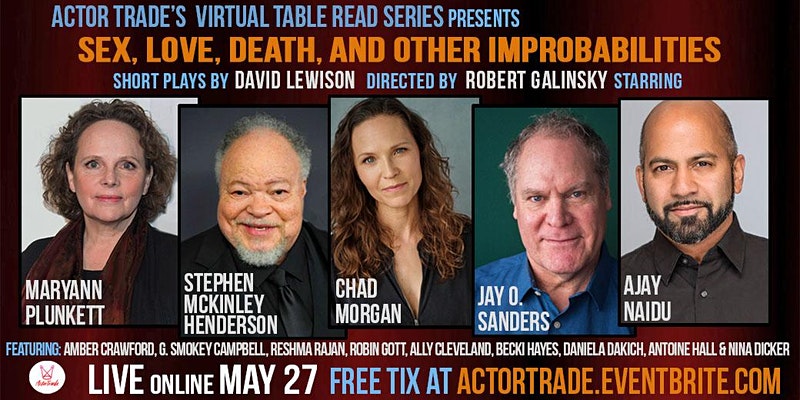 WOMEN / CREATE!, a virtual festival of dance, will be presented on Thursday, May 20, 2021 at 7:30pm ET, livestreamed on Facebook, Twitter, Vimeo, and YouTube. The full program and post-show talkback will be available to view through Sunday, May 23, 2021 on Vimeo. The event is FREE, with a suggested donation of $10. Advance registration is requested at https://pentacle.formstack.com/forms/women_create_festival. For more information, visit https://newyorklivearts.org/event/women-create-a-virtual-festival-of-dance/ or womencreatedance.org.

The Actor Trade Table Read Series, May 27 at 9:30 pm, will present David Lewison’s Sex, Love, Death, and Other Improbabilities.  Directed by Robert Galinsky, the reading will star Tony Award winner Maryann Plunkett (Film: Little Women.  Broadway: A Man for All Seasons), Tony Award nominee Stephen McKinley Henderson (Film:  Fences. Broadway: A Dolls’ House Part 2, A Raisin in the Sun), Chad Morgan (Film/ TV” ‘This is Us,” The Purge: Anarchy ), Drama Desk Award winner Jay O. Sanders (TV: “Blindspot.” Broadway: Girl from the North Country)  and Ajay Naidu (Film/TV: Office Space, “Blindspot”) and is being presented as a benefit for Literacy for Incarcerated Teens.   The online event is FREE, but RSVPs are required at Eventbrite.

Tony Award-winner Beth Leavel (The Drowsy Chaperone, The Prom), Joshua Dela Cruz (Host of “Blues Clues & You,” Aladdin) and Ali Ewoldt (The Phantom of the Opera, The King and I) will be featured in 20 & UNDER SING 20 & OVER: ACT II, a virtual benefit concert celebrating Broadway musicals, written at least 20 years ago, by having young rising stars (ages 20 and under) pair up with Broadway stars from the Broadway or touring company of each show they are singing from. All donations from this sequel event will benefit The Actors Fund.

20 & UNDER SING 20 & OVER: ACT II will air via YouTube on May 22, 2021 at 8PM (ET). The concert is produced, and music directed by Jorden Amir. A link for viewing the concert, along with more cast members, will be released shortly. Visit http://under20singover20act2.eventbrite.com/ for more information and to register for your streaming link.