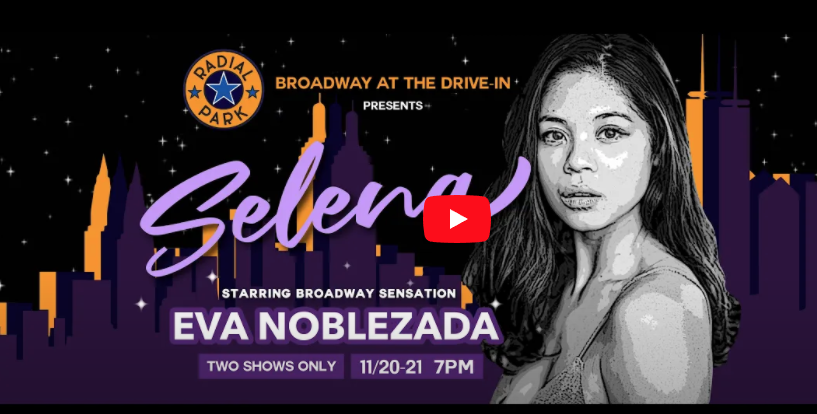 Selena: A Live Drive-In Experience, starring two-time Tony Award® nominee Eva Noblezada, plays the big screen and stage at Radial Park at Halletts Point Play for two nights only this Friday, November 20 and Saturday, November 21, 2020 at 7:00 PM ET, with special opening performance by Latin Grammy Award® winner Ella Bric,alongside a live 6-piece band. Selena: A Live Drive-In Experience, is aone of a kind, live, simultaneously cinematic and theatrical performance, that includes musical numbers from the hit-movie both before and intertwined in-time within the film including, I Will Survive / Funky Town, Last Dance, The Hustle, On The Radio, Como La Flor, La Carcacha, Bidi Bidi Bom Bom, Baila Esta Cumbia, Dreaming of You, and I Could Fall in Love.

Ella Bric, Venezuelan songwriter, trumpeter, producer and vocalist will perform as a special guest opening act. Ella Bric was awarded Producer of the Year at the 19th Annual Latin GrammyAwards, becoming the first woman ever to win the award. Selena: A Live Drive-In Experience, presentedby Stark Production Group is directed by Vanjah Boikai with musical direction and arrangements by Emily Marshall. Executive Producer: Jeremy Shepard. Creative Director: Chris Fink. Tickets ($100 – $150 per group) are now on sale and can be purchased online at RadialPark.com/tickets.

NJ Rep presents the third release in the series, Keeping Live Theatre Alive!, conceived by Dan Lauria and featuring original works created by actors who champion theater. NJ Rep and our four partner theaters Berkshire Playwrights Lab, Durango Playfest, Laguna Playhouse, and Seven Angels Theatre are the recipients of this treasure-trove of heartfelt stories. Over the next several months these stories performed by the authors, who are prominent actors of stage, film and television – Joe Spano, Christine Ebersole, John Cullum, Steve Harris, Chris Sullivan, Dan Lauria. What they all have in common is their passion and love for live theater. www.njrep.org

Producers Michael Jackowitz of Witzend Productions, David Bryant and Michael Alden, in partnership with Streaming Musicals, are pleased to herald the arrival of a new holiday musical tradition with the World Premiere of Estella Scrooge: A Christmas Carol with a Twist. Estella Scrooge will premiere on Friday, November 27, 2020 at EstellaScrooge.com. Tickets ($24.99) at Ticketmaster.com

Award-winning Writer, director, producer, Israela Margalit, will debut her newest work CROSSROADS, Six Short Plays about love, pain, passion, and joy, on Thursday, December 3 at 7:30 PM EST and Sunday, December 6 at 2:30 PM EST, via YouTube, with an encore presentation Christmas week streaming between December 24-31. The show is FREE, to sign up for your link please visit Eventbrite.

Japan Society has launched its Fall 2020/Winter 2021 Performing Arts Season with a series of online events, due to the global COVID-19 pandemic.  In this double-feature program, Japanese megastar and kyogen actor Mansai Nomura presents a popular piece from the traditional repertoire entitled Shimizu (Spring Water) and Mansai’s own creation, for which he collaborated with noted writer Seiko Ito, a new kyogen piece titled Kagami-kaja (A Mirror Servant).  This presentation launches online on Wednesday, December 9 at 8:30PM EST with a watch party full of facts and live commentary about this 700-year-old comedic art form and its stylized performance.  On Saturday, December 12 at 9:00PM EST, Mansai will sit down with Japan Society’s Artistic Director Yoko Shioya for a live Q&A to discuss how he is striving to create new work for this traditional art form.  The live Q&A will take place on Japan Society’s YouTube channel.  Both offerings are FREE but registration is required at www.japansociety.org for the kyogen performance double feature.

Inspired by its success November 14 of “Open ‘Tho Shut,” an afternoon of “walk-by theater” staged in its set shop and visible from East Tenth Street, Theater for the New City will present its second installment of the innovative presentation on Saturday, November 21 from 2:00 PM to 3:30 PM.  The program is a succession of free, live walk-by performances in which acts are staged live in the theater’s set shop for audiences of socially distanced passers-by, who watch through an open garage door on East Tenth Street between 1st and 2nd Avenues.  The shop was renamed “The Chopshop Theater” for this series.

The series’ launch last week was part of “More Ways than Broadway’s,” a city-wide collection of safe and socially distanced pop-up performances to demonstrate small theaters’ readiness and desperate desire to physically reopen and to counteract the perception, based on formal Broadway, that legitimate theaters can’t reopen safely.  The performances weer intended to demonstrate an Off-Off Broadway aesthetic that could allow smaller theaters to open safely at this time.

TNC pioneered walk-by theater in its 2020 Village Halloween Costume Ball October 31, when it reconfigured its set shop with lighting and sound to make it a venue for ten-minute plays.  The effort was named “Chopshop Theater.”

The performers’ list for November 28 is in formation now.  TNC hopes to continue these “Open ‘Tho Shut” performances every Saturday at 2:00 PM until it gets too cold.

Meet Crossover, the newest singing competition to hit the airwaves with a streaming-era twist: the competing artists must prove that they’re adept at both writing and performing across different genres in order to claim the title of Crossover Champion. When four women tie in the regional competition, they reluctantly opt to compete on the national broadcast as a group: Four-Way Tie. As they navigate the ups and downs of sudden fame, they learn more about themselves and each other than they ever thought possible. CROSSOVER’s megamix-style score, featuring influences from dance pop, country, R&B, and rap, reinforces the show’s message: love between women, romantic or otherwise, is something to sing about.  CROSSOVER’s original cast album is available to stream on Spotify, Apple Music, and other major music platforms. The show is scheduled for 8:00pm on Saturday, December 12th, 2020. Crossover will be presented virtually as an interactive live stream. Tickets are $15.00, and will be sold through the Rogue Theater Festival’s ShowTix4U Page starting on November 16th, 2020. A link to the performance will be sent with each ticket purchase.

Steppenwolf’s production of The Minutes by Tracy Letts, directed by Anna D. Shapiro, will be loading its set out of the Cort Theatre this Monday, November 16th to make way for the previously planned renovation of the Cort and the construction at the adjacent property.

“The Shubert Organization had graciously allowed us to extend past our initial announced limited engagement (July 19, 2020) to the fall,” noted the producers, “and we intend to reopen the production, pending cast and theatre availability, on Broadway on Tuesday, March 15, 2022, exactly two years after our original opening date of Sunday, March 15, 2020.”

As of now, the creative team of The Minutes remains intact.  By confirming the new opening date of March 15, 2022, the producers are hopeful that they will be able to also maintain the cast that includes Ian Barford, Blair Brown, Cliff Chamberlain, K. Todd Freeman, Armie Hammer, Tracy Letts, Danny McCarthy, Jessie Mueller, Sally Murphy, Austin Pendleton and Jeff Still.