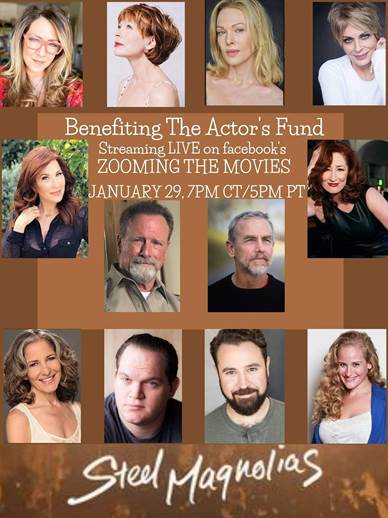 THE MAGICAL CITY by Zoë Akins, a backstage drama of poetry, business, and murder –  1919 Noir in a Lyrical Verse Drama by Pulitzer Prize Winning Dramatist. Free, live-streamed with talkback to follow. January 30, 2021 at 8 pm at 8 pm thru Feb. 3 at 10 pm – Available at: www.metropolitanplayhouse.org

All performances will be at 8:00PM and will follow a “hybrid” model of being streamed online with a few seats available for in-person viewing.Ticket sales will be live at www.BlackBoxPAC.com by February 1st.

East Village staple, the wild project, the eco-friendly, nonprofit 89-seat theatre, has launched a GoFundMe campaign to keep their doors open. They’ve set a $50,000 goal. To donate, visit their GoFundMe page at https://charity.gofundme.com/o/en/campaign/save-the-wild-project-theater.
Led by producing artistic director Ana Mari de Quesada, a member of both the BIPOC and LGBTQ+ communities, the wild project’s mission is to ensure that underrepresented artists have an artistic home. Since its founding in 2007, the wild project had supported over one hundred artists in theater, dance, music and film annually. The Pause on live-performance has depleted the wild project’s resources and the theater is at-risk to close.

The New York Philharmonic announces its annual Lunar New Year celebration, the first in a virtual format, on February 16 at 7:00 p.m. EST. The free concert broadcast will air on the Philharmonic’s Facebook and YouTube channels and at nyphil.org/lny, and will remain available on demand for two weeks. This year’s Lunar New Year celebration is dedicated to the memory of Shirley Young — Philharmonic Board Member. Tuesday, February 16, 2021, at 7:00 p.m. EST, on Facebook, YouTube, and nyphil.org/lny

Brian Moreland is the recipient of the Ninth Annual Broadway Global Producer of the Year Award from Broadway Global. Moreland was chosen by Broadway Global for his outstanding work on and off the stage, his commitment to employing diverse talent, ingenious creative teams, and his dedication to the theater community. Moreland has been nominated for two 2020 Tony Awards® for Best Play: Sea Wall / A Life starring Jake Gyllenhaal and Tom Sturridge and The Sound Inside starring Mary-Louise Parker.

His upcoming projects include Thoughts of a Colored Man by Keenan Scott II, directed by Steve H. Broadnax III which will be coming to Broadway this year at a Shubert theater to be announced and Charles Randolph-Wright’s Blue with Leslie Uggams, Lynn Whitfield, directed by Phylicia Rashad, and American Buffalo with Laurence Fishburne, Sam Rockwell, and Darren Criss.

He devotes his spare time to the Theatre Development  Fund (TDF) and is active member of the Board of Governors at The Broadway League, where he is also Co-Chair of the Multicultural Task Force, and a Trustee of the Board for Broadway Cares / Equity Fights Aids.

Theaters as vaccination sites- The Broadway League is joining other live events organizations in offering theaters and staff to aid in vaccination efforts. In a letter to the President, the League and live events groups offered venues as vaccination sites, as well as workers and ticket management systems to make the process more efficient. The letter emphasizes the thousands of live entertainment venues across the country that are currently going unused, as well as the capabilities of an industry that is used to handling large crowds. …Needless to say, this can only work if more vaccine becomes available.