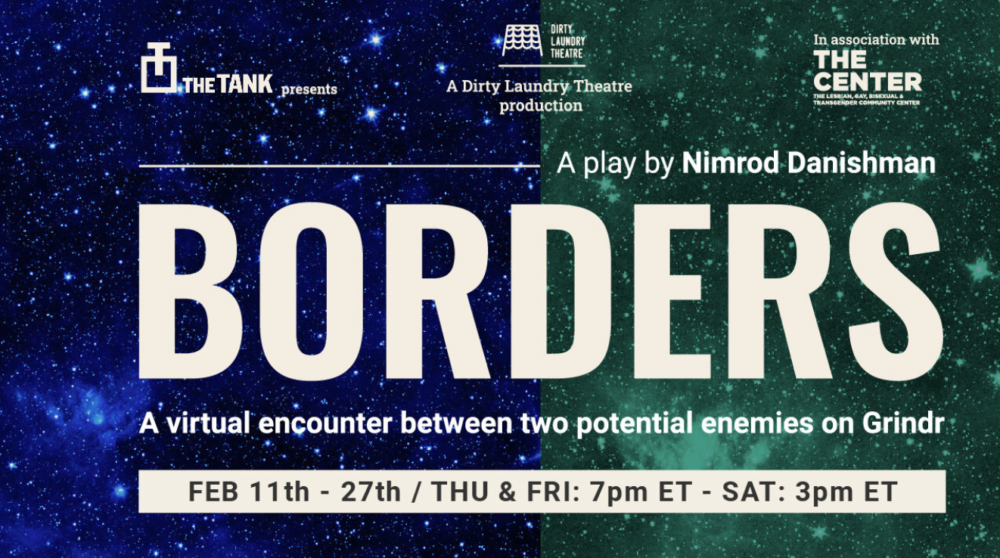 Borders by Nimrod Danishman (Kara Be’emet) and directed by Michael R. Piazza (One in the Chamber). Produced by Dirty Laundry Theatre and presented by The Tank in association with The Lesbian, Gay, Bisexual & Transgender Community Center (The Center). The cast of Borders features Adrian Rifat as George and Eli M Schoenfeld as Boaz.

Bated Breath Theatre Company will present a special performance inspired by their immersive live hit VOYEUR: THE WINDOWS OF TOULOUSE-LAUTREC in the windows of Fleur du Mal (175 Mott Street) on Friday, February 12 from 5-7 pm. Special Live In-Store Experience. Voyeur cast members Katherine Winter, Natasha Frater and Chloé Bell will perform short works in rotating repertory inspired by their acclaimed roles and wearing fashions by Fleur du Mal. The event is free and open to the public with masking and social distancing required. The lingerie, clothing and swim collection inspires the art of dressing up. . . and undressing. (photos: Hunter Canning)

Here’s an unusual experience you may want to participate in . . . Artistic Stamp. If you want a hiatus from digital interaction and miss immersive theatrical reality, try Artistic Stamp. It’s an intimate journey via handwritten correspondence between you and a character off on a unique adventure. Be their confidante, react to their letters and objects they send – play a role in deciding their fate. Artistic Stamp is a 6-letter story customized for you that plays out over 4 months. If you can’t venture out, bring the adventure home! Visit www.artisticstamp.com for more information.

The Wild Project is streaming on demand – something for everyone including: Trees: A New Musical, by Mur; Virtual Impossibilities (starring Eric Walton) thru February 27; Coming Feb. 16 see Tether; from March 5 thru 13 Happy Days (by Samuel Beckett), a film by Nico Krell; from March 19 thru April 18 you can view Followspot (a series of digital comedic performances to save theater)! Tickets are $10 to each. www.thewildproject.org

Two fiercely funny Latinx-American women, two compelling solo comedies about female identity. Written, performed and directed by members of Los Angeles’ acclaimed IAMA Theatre Company and filmed live at L.A.’s Pico Playhouse, Anyone But Me, written and performed by Sheila Carrasco, directed by Margaux Susi; and The Oxy Complex, written and performed by Anna LaMadrid, directed by Michelle Bossy, will premiere virtually on March 21 at www.iamatheatre.com, where each will continue streaming through April 18.