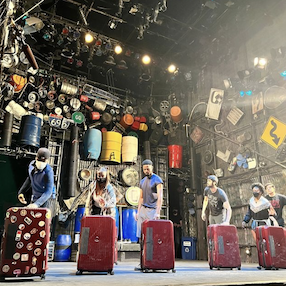 STOMP’s New York production announced that the award-winning percussion, rhythm and comedy sensation will end its (almost) 29-year run on January 8, 2023. STOMP’s North American and European tours will continue to run. STOMP opened at The Orpheum Theatre on February 27,1994. When it closes, it will have played 13 previews and 11,472 regular performances. A unique combination of percussion, movement and visual comedy, STOMP has made a global mark on popular culture. www.stomponline.com

The producers of KPOP announced that the groundbreaking new musical will have its final Broadway performance on Sunday, December 11 at Circle in the Square Theatre. The final performance will be host to a special Asian American and Pacific Islanders (AAPI) Community Event and panel discussion to celebrate and reflect on AAPI representation on Broadway and beyond. KPOP will have played 44 preview performances and 17 regular performances.  200 complimentary tickets are being offered to AAPI community members and youth for the final performance, followed by a panel discussion with top AAPI theatre artists including the first Asian American playwright to win a Tony Award, David Henry Hwang; the first Asian female composer in Broadway history, KPOP’s Helen Park; Korean playwright Hansol Jung; and actor Pun Bandhu.  www.telecharge.com (212-947-8844)

In development – OBSESSED, The Story of Diane Warren…so far, a new musical based on the incredible life of one of the most famous and successful songwriters of all time, is in development. OBSESSED is a rollicking rock ‘n’ roll musical of passion, obsession, and determination. The story of an extraordinary “bad-ass” woman – a genius who wrote and composed the soundtrack of our lives. OBSESSED includes Diane Warren’s biggest hits and features an acclaimed creative team brought together by Ms. Warren including two-time Tony Award-winning book writer Joe DiPietro and three-time Tony Award-winning director Kathleen Marshall and producer Irit TenHengel.