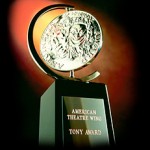 Theater Pizzazz will be in the Press Room at the Tony Awards tonite, Sunday June 7th. We’ll begin earlier bringing you photos from the Red Carpet and keep updating as the Winners are brought into the Press Room. You’ll see the Winners up close as we give you information on just what they have to say along with photos.

Stay tuned and, in the meantime, here’s some Tony trivia:

· 18 – The number of characters named after Shakespeare characters in Something Rotten!

· 23 – The number of years since a play was last Tony-nominated for Best Choreography (This year, it was The Curious Incident of the Dog in the Night-Time)

· 70 – The number of years between On the Town’s original production opening and the Broadway revival’s opening, making it this season’s oldest nominated musical