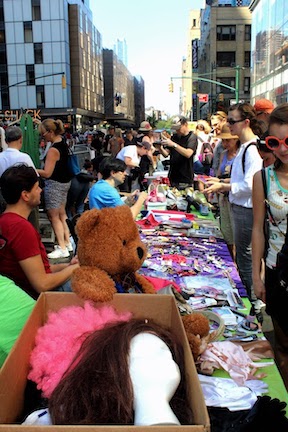 “New York Times critic Ben Brantley to step down” by Broadway News’ Caitlin Huston – “Ben Brantley, co-chief theater critic at the New York Times, is stepping down from the post after 24 years, the Times confirmed Thursday. Jesse Green, his co-chief critic, will remain in his role and the Times will look to fill Brantley’s position. Brantley’s last day will be Oct. 15. …

“This pandemic pause in the great, energizing party that is the theater seemed to me like a good moment to slip out the door,” Brantley said in a press release. “But when the theater returns, I hope to be there — as a writer, an audience member and, above all, the stark raving fan I have been since I was a child.”” http://bway.ly/rsffr5

“The Pulitzer Prize Board will consider postponed or cancelled productions as well as shows streamed online for the 2021 drama prize. … The prize will encompass theatrical productions that were scheduled to or able to open between Jan. 1 and Dec. 31, 2020. … However, creators of the dramatic works can decide to hold off on submitting the work to the Pulitzer Board, as they “can determine when it is ready for award consideration.”” http://bway.ly/myq8wv

“Dr. Anthony Fauci … said Wednesday we likely won’t be able to safely sit down in theaters for at least another year, if not more. … “I think it’s gonna be a combination of a vaccine that has been around for almost a year and good public health measures,” Fauci told Garner. Fauci said that even if a vaccine were to be finalized by November or December of this year, that would mean the soonest the majority of the population could be vaccinated is by Fall 2021.” http://bway.ly/jxvrdq

“Broadway Flea Market and Grand Auction Goes Virtual” by Playbill’s Dan Meyer – “A number of interactive experiences are planned for the September 20 event, including a live and silent auction and an online store for theatre collectibles. In addition, one-on-ones (replacing the autograph table and photo booth) with Broadway favorites will be held online, with a lineup announced next week.” http://bway.ly/yr944y

TEDXBROADWAY: TEDxBroadway organizers have announced that the 9th annual event will be held online this year. The date of the virtual event is set for Tuesday, November 17 at 1pm ET. TEDxBroadway “will feature a wide variety of topics and talks from speakers with varying perspectives and unique ideas,” and speakers will be announced soon.

EDUCATION: “Kristin Chenoweth Joins Oklahoma City University for a New Screen Acting MFA” by Backstage’s Casey Mink – “Beginning in January 2021, the two-year intensive will focus specifically on screen acting, with the first year set in Los Angeles and the second in London, in partnership with the U.K.’s Academy of Live & Recorded Arts.” http://bway.ly/j8lga6

ACROSS THE POND: “Original Broadway Creatives At Work On Beauty and the Beast UK/Ireland Tour” by BroadwayWorld – “It was officially announced today that Disney Theatricals is currently at work on a production of Beauty and the Beast which will tour the UK and Ireland in May 2021. … The original creative team from the Broadway production has signed on for the project.” http://bway.ly/3i7hik

IN MEMORIAM: “Dame Diana Rigg, Tony-Winning Star of Stage and Screen, Dies at Age 82” – “Diana Rigg, a celebrated actress with a career spanning stage roles in drama and musical comedy and screen roles on film and television, has died at the age of 82. … Rigg was Tony-nominated for each of her four appearances on Broadway, as Heloise in Abelard & Heloise (1971), Célimène in The Misanthrope (1975), Mrs. Higgins in My Fair Lady (2018) and winning the Tony for playing the title role in Medea (1994) … ” http://bway.ly/8cahym