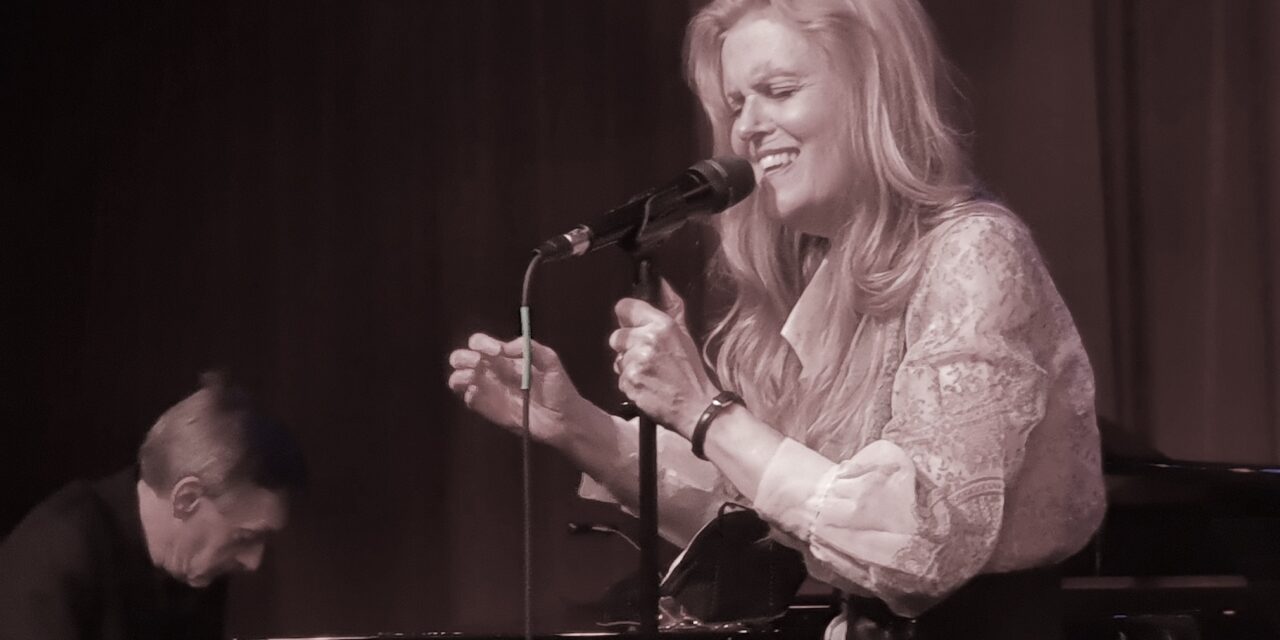 Tierney Sutton, a noted jazz singer with nine Grammy nominations, opened up her latest engagement at Birdland on May 24th, with her trio, The Tierney Sutton Band.  The lovely blonde singer’s most wonderful name brings to mind the screen siren Gene Tierney.  Ms. Sutton has a new album out (Paris Sessions 2), but this show would not be about that, and not a single track would be represented at this performance.  Rather, it was a celebration of the band itself.  The singer and her trio have played together for close to three decades, having celebrated their 25th anniversary in May 2021 at The Wallis Annenberg Center for Performing Arts in Los Angeles.  This makes for a remarkable level of seamless communication and synergy.

The band kicked off with Irving Berlin’s “What’ll I Do,” after a long, quote-filled instrumental intro.  Slowly singing against Trey Henry’s furious bass line, Ms. Sutton used her voice like a bowed violin, seemingly drawing notes right out of thin air with her hands.  In fact, the star’s interpretative abilities can be found not only in her vocal delivery, but in the expressiveness of her eyes and mouth, the movement of her hands.  She has remarkable control over this instrument, and her innovative technique makes the Tierney Sutton band, in essence, a quartet, rather than a singer backed by a trio.

Ms. Sutton informed the sizable audience that the legendary lyricist Alan Bergman requested she perform “Emily” (Johnny Mandel/Johnny Mercer), and that the stunning flowers at the foot of the stage were sent by Mr. Bergman.  The marvelous interplay of the musicians had the assurance only a band playing together for close to three decades could have.

The arrangement of Cole Porter’s “I Get a Kick Out of You” saw extensive use of vocalese/scat by the singer, with a great utilization of “doubling” (unison or octave intervals by multiple instruments) on the bass and piano.  When Ms. Sutton scats, she makes much use of a very enunciated, wide-mouthed “e” phonetic sound, like “dee dee bee,” etc., notable only because it seems to be a signature of her scat singing.

An especially strong segment of the set saw several Sting numbers, from Ms. Sutton’s “The Sting Variations” album.  “Driven to Tears” incorporated an iconic Miles Davis riff from “So What,” and at one point had her singing against a single, incessant piano note.  A mashup of Sting’s “Fragile” with the Luiz Bonfa/Matt Dubey song “The Gentle Rain” was stunning.  And in “Walking in Your Footsteps,” Ray Brinker’s brilliant percussion alluded to those footsteps.

A most surprising choice for this band was “You’re the One That I Want” (John Farrar) from Grease.  Ms. Sutton made fun of the choice herself, taking pains to pin it on pianist Christian Jacob, whose arrangement turned this pop fluff into an interesting song.

A pair of “happy” songs were dedicated to a pair of dearly departed trumpet players connected to Ms. Sutton.  The late jazz trumpeter Maynard Ferguson was Mr. Jacob’s father-in-law.  “Make Someone Happy” (Jule Styne/Adolph Green, Betty Comden) from her From the Other Side album, was dedicated to Ferguson’s memory.  A unison section of voice, bass and piano was quite remarkable.  “I Want to Be Happy” (Vincent Youmans/Irving Caesar) was in turn dedicated to the late singer/trumpeter Jack Sheldon, who may be best known to our readers as the singing voice of the Congressional “bill” in the Schoolhouse Rock! cartoon “I’m Just a Bill.”  This number was very “Modern Jazz Quartet” with innovative synchronous parts, as well as starts and stops that commanded the listener’s attention.

The final song, “Old Devil Moon” (Burton Lane/Yip Harburg) was an opportunity for extensive solos by each musician, with Ms. Sutton directing each of them with a glance or hand gesture.  It was a fine ending to a very strong set.

This show was scheduled as a five-night, ten-show run.  After a great first night, which included a surprise appearance downstairs at The Lineup with Susie Mosher, which this reviewer was fortunate to witness, Ms. Sutton turned ill.  The rising young jazz star Anais Reno, reviewed here last year, was tapped to sing the remainder of the sets with the Tierney Sutton Band.  She had considerable shoes to fill, if opening night was any indication.  Various reports indicate that Ms. Reno made the most of her “Shirley MacLaine” moment, including a sold-out room on Friday night.  By the final night of the engagement, two members of the trio succumbed as well, and Billy Stritch filled in for Christian Jacob.