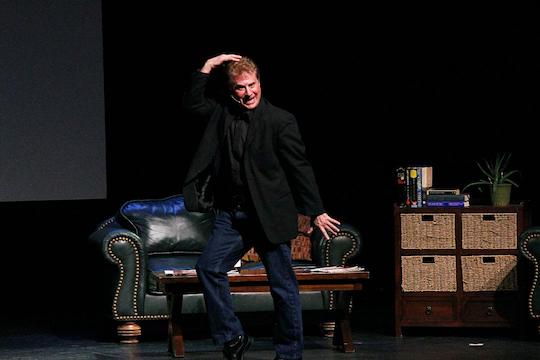 Peter Fogel is a throwback to a time when you could watch a comedian like him on The Ed Sullivan Show, the CBS Sunday night variety series that ran from 1948 to 1971. Families gathered around the set and watched G-rated comedy entertainment provided by such stalwarts as Henny Youngman (the king of one-liners), Jack E. Leonard (an insult comic before there was Don Rickles) and Myron Cohen (his stories all told with the thickest of Jewish accents). Youngsters like the early George Carlin and Richard Pryor and many women such as Totie Fields (loud and very funny), Betty Walker (working with the same prop as Bob Newhart and Shelley Berman—a telephone), Moms Mabley (in a house dress and leaving her teeth at home for some bold comedy) and, the Big Mama of them all, Joan Rivers, a motormouth for whom everyone had a target on their back. Fogel’s shtick (there’s no other word for it) is the put-upon guy, much in the way Rodney Dangerfield once complained that he “got no respect.” The long-standing stand-up is currently starring in his own show titled ‘Til Death Do Us Part… You First, which opened for three performances at the Triad Theatre on the Upper West Side in what is being touted as its off-Broadway debut, having been pre-tested at venues all over the country.

Fogel is an actor and road comedian who’s been at it for nearly forty years. In a recent interview with Theater Pizzaz’s Sandi Durell, he and the show’s director, Academy Award nominated actor-writer-director Chazz Palminteri, discussed their unlikely collaboration. “I did not know Peter,” Palminteri said. “I happened to be in Florida on business. [A mutual] friend says, ‘Chazz, you should see my buddy, this very funny guy Peter Fogel’s solo show. So not announcing myself, I sat in the back and heard this audience laughing hysterically at this gifted comic actor’s performance. I was blown away at how funny he was—but more importantly, how the show, the writing, and the pacing—resonated with the audience. The show is about the absurdities of love, marriage, and relationships and what everybody goes through. Couples were laughing and elbowing each other as if to say, “See, this is what you do to me!” I was so impressed with the solo show’s potential that I met Peter later in the lobby. Right there, on the spot, I offered to take his play on to the next level and get it ready for off-Broadway and beyond.”

How lucky can you get, right?

Palminteri even inserts himself into the show from time to time as a kind of father-figure-voice-of-God over the sound system and it works. He guides Fogel’s man-child a bit while he continues the search for the key to understanding women after a lifetime of perplexity. Still a bachelor at sixty, Fogel hasn’t given up on finding a true love, even if his interactions along the way offer more than a few self-deprecating reasons why singledom has been his fate—at least thus far. As he puts it early in the evening, a woman saying, “We have to talk,” can be the scariest words spoken to a man. Or, as he puts it, “The silent treatment is not a punishment, it’s a vacation” (I can hear the great Alan King saying the same thing while watching him on my parents’ old Zenith, punching the word vacation for all its worth).

Are the jokes a bit stale? Hey, some people like day-old bread. Is there a difference between vintage and mummified? It’s a thin line, sure, but once you’ve been indoctrinated into this sort of humor, it leaves its mark—like a Polio vaccine. It can make you wince, but once inoculated, you’re safe from harm.

Fogel is a funny man, though his reliance upon always going for the joke tends to decrease the chance for some breathing room between stories, which is what makes the respites with Palminteri highlights of the show. He’s used his years of stand-up in fashioning this, but still relies too heavily on that form. Abandoning some of that would go a long way towards creating more of a play, for which this piece holds promise. Heightening the confessional aspect might find his audience leaning in a bit more instead of sitting back, too comfortable in the jokes. The best parts are actually when he makes the audience uncomfortable, either by his being a little too honest (keep going there) or when he drops the funny man (all too briefly).

At roughly the same age Fogel is now, the former rabbi-turned-comedian Jackie Mason brought a one-man show to Broadway titled The World According to Me (1986). It was the compendium of his years of experience doing stand-up after trudging through every backwater burg imaginable, selling his wares much like whatever Willy Loman had in his suitcases. But whaddya know? Suddenly, as if out of nowhere, Mason became the toast of the town. His old shtick had found a new audience and he was a sellout, even winning a special Tony Award for Excellence in the Theatre. What had changed? Nothing, really. Except he had made a simple but profound discovery: though still telling the same jokes, he was now telling them as Jackie Mason, not “Jackie Mason.” It made all the difference.

There’s a lesson in that.

Peter Fogel’s “‘Til Death Do Us Part . . . You First.” Through November 13 at the Triad Theatre (158 West 72nd Street, between Broadway and Columbus Avenue) www.triadnyc.com.