Tim Connell … and so it goes… 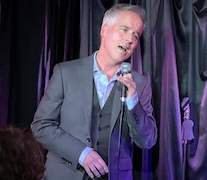 It was a pleasure to see Tim Connell at Pangea again, a year nearly to the day after his Dreamin’ Again show.  Connell, who recently appeared at the final night of the Mabel Mercer Foundation’s 33rd Cabaret Convention with a medley of George M. Cohan songs, served up a homey dish of stories and songs at the first of his two December bookings at Pangea.  This performance was completely sold out.

Connell opened with “Wait ‘Til You See What’s Next” (Jason Robert Brown), alternating conversational line readings with legato lines.  He was in exceptional voice here.

Connell shared stories of his childhood and family, some of whom were present, including his sister and his Aunt Chris, who nearly became a nun.  Chris was the subject of his tale of “Little Timmy’s” road trip to visit her.  The story seamlessly segued to “Child in Me Again” (Annie Dinerman), perhaps best known for the recording by the late Nancy LaMott.  His delightful, brisk waltz rendition in the presence of his family, was a warm and fuzzy highlight.

The star spoke of his early recognition of his gay identity when, at the age of 13, he spotted a boy on the steps of the Philadelphia Art Museum (steps otherwise made famous by Sylvester Stallone in Rocky), and felt that the boy really saw him.  He sang “Nature Boy,” the unique Eden Ahbez song made famous by Nat King Cole, a medley with John Bucchino’s “Unexpressed.”  The two songs have contrasting views.  There “Nature Boy” is a gift of sage, universal truth “The greatest thing you’ll ever learn, is just to love and be loved in return,” Bucchino has Connell ready to explode with love:

Sometimes I think my heart will burst

With all the love that’s waiting here

You might not have recognized Bruce Springsteen’s “Thunder Road” after Connell brilliantly unpacked it by transforming it into a folk song, in similar fashion to singer-guitarist Eleri Ward’s “reimagined” Sondheim songs.  Suddenly, “Thunder Road” made a whole lot of sense.

This reviewer’s favorite song of the night was “Always Look on the Bright Side of Life” from Monty Python’s Spamalot.  (Connell toured in Spamalot in 2006-2007.)  The wonderfully preposterous and infectious song called for audience participation and whistling.  When sung by someone with the kind of innocent visage that suggests he must have been an altar boy, lines like “Life’s a piece of sh*t/When you look at it” brought the giggles out in the room.

For a wonderful finale, Connell sang a medley of “Remember” (Irving Berlin), with its wistful remembrance “of a place from long ago,” and “Have Yourself a Merry Little Christmas” (Hugh Martin/Martin Blane).  With the foreshadowing of “Remember,” the latter song pulled the heartstrings more than usual.

Tim Connell is a natural, comfortable storyteller. Though he occasionally admitted to having to sneak a peek at his script, he so internalized it that the audience would not have noticed these peeks had he not pointed them out.  His stories and anecdotes leading up to nearly every song perfectly set up the premise.  While he has a beautiful and airy tenor voice (with power when necessary), his thoughtful phrasing and connection to his audience are what sets him apart.  With the accompaniment of the aptly named James Followell and under the masterful direction of Steven Petrillo. This is a cabaret show that will leave you touched, moved and inspired.

Tim Connell … and so it goes … took place on December 8, with a second performance scheduled for December 17, at Pangea (178 Second Avenue between 11th and 12th Street (www.pangeanyc.com)