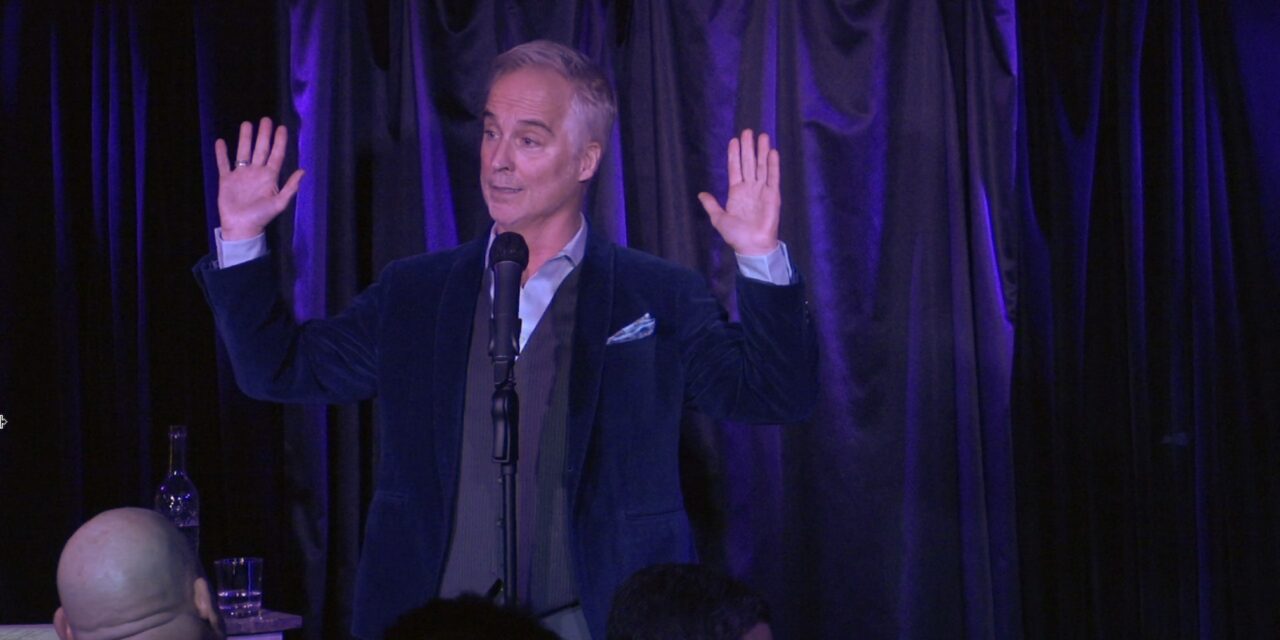 Tim Connell took to the Pangea stage looking for all the world like a stately Irishman who happened to have won the Masters golf tournament that day.  Dressed in a crushed blue velvet blazer and a grey-striped vest, Connell, an actor and singer of some 37 years in the business, presented a fine program in Dreamin’ Again, with conversational stories that set up a diverse set of 16 songs ranging from Irving Berlin to Jason Mraz.  Connell has a beautiful, clear tenor with a similar timbre to that of Jack Jones.  He has boyish good looks, with his thinning silver hair the only evidence of a recent 60th birthday.  Backed only by pianist James Followell (a wonderfully appropriate name), with whom he has worked for decades, Tim Connell was quite entertaining.

Connell initially sang romantic, sweet lyrics.  Reminded of a longing he forgot he lost, he sang a delicate “Skylark” (Hoagy Carmichael/Johnny Mercer), a lovely medley of “My Foolish Heart” (Victor Young/Ned Washington) and “How Deep Is the Ocean” (Irving Berlin).  Then, just as you thought Connell might be more on the choir boy side, the self-described ex-Catholic showed his wild side with “He Never Did That Before” (Debra Barsha / Mark Campbell) from Campbell’s musical play “Songs from an Unmade Bed,” which explores the romantic life of a gay man living in the city.  The song is both funny and raunchy, filled with clever double-entendres that leave little to the imagination, and had the audience in stitches.

In a similar vein, a parody of Cole Porter’s “Anything Goes” seemed designed to bring the shock back to audiences inured to the types of risqué behaviors described by the closeted Porter.  With its gay-centric lyrics and references to political figures like Sean Hannity and “The Pillow Guy,” it brought many laughs and was a marvelous piece.

Connell has worked with his superb accompanist and arranger, James Followell, for 30 years since they met working in a Jerry Herman show on Nob Hill in San Francisco.  If the preceding songs did not make things clear, it was settled once and for all with Herman’s anthem “I Am What I Am,” from La Cage Aux Folles.

Like a sommelier choosing just the right wine for your côte de boeuf, Connell had several excellent song pairings among the evening’s courses. One such medley was “Bless the Beasts & the Children” and “Children Will Listen” (Barry Devorzon /Perry Botkin, Jr.; Stephen Sondheim).  Connell, a man from a large family of 11 children, with some 20 nieces and nephews, is about to become a great-great uncle.  The medley gave him both an opportunity to send a message about the importance of teaching our children, and his thank you to Stephen Sondheim, who died suddenly the day before the show.

The grief over Sondheim’s death in the cabaret community made “Fragile” (Sting) quite the prescient choice.

On and on the rain will fall

On and on the rain will say

Connell’s singing on “Fragile” was delicate and emotionally resonant, and especially attractive with the harmony from Followell. His delightful story of an unlikely, intense romance with a man he met in Europe, and their shaky gondola ride up a mountain, served as a metaphor for the wild trip he was on, setting up the show’s most powerful number, “End of the World” (Matt Alber).  A vulnerable Connell sang,

I don’t wanna be dangled over

The edge of a dying romance

Would the ride be the end of the romance?

I don’t wanna believe it’s over

I just wanna stay with you tonight

Though the romance did end, the melody lingers on.  Tim Connell is a delight.

The show was directed by Steven Petrillo.