It’s Time to Boogie at The Chain Theatre 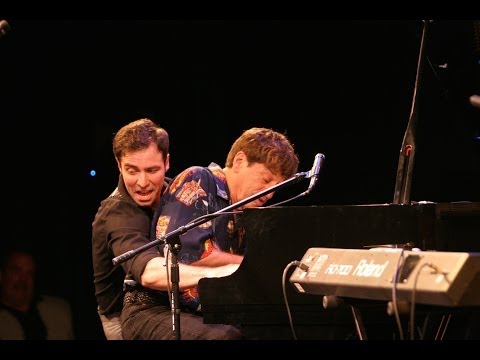 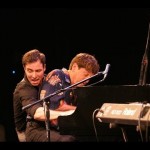 In Boogie Stomp!, pianists extraordinaire Bob Baldori and Arthur Migliazza define the blues as rhythms for dancing that were originally created by recently freed African-Americans. Not surprisingly, American piano music is all about rhythm, improvisation and syncopation over the blues

This music was based on an oral tradition and created by anonymous composers who passed down their ideas. It thrived in honky-tonks, bars and rent parties. And for two hours it is thrilling audiences at The Chain Theatre in Long Island City, where Baldori and Migliazza perform many of the classic songs made famous by legendary blues men and women.

Seated at separate baby grands Baldori and Migliazza play amazing duets of “Suitcase Blues,” “Okemos Breakdown” (a breakdown is a wild party) and the Chuck Berry classic, “Back in the USA.” Then for the last number of the first act, they sit at the same piano for “Fourplay,” an original and improvised work. Hands fly over each other at amazing speed, and at one point Migliazza actually sits behind Baldori as they continue on their roll, never missing a beat.

Migliazza does several astounding solos of “St. Louis Blues” and “Bumble Boogie;”  and Baldori performs a bluesy version of “Tennessee Waltz” that might make Patti Page rise from her grave and applaud. Baldori also plays the harmonica on several numbers, including “Shake that Boogie” and Muddy Waters’ signature song, “Mojo.”

In “By Myself,” Baldori plays a synthesizer set on voice mode. As Baldori sings, it sounds as if he were backed by a doo-wop group.

While Baldori and Migliazza play, Guillermo Laporta’s projections show famous jazz musicians performing, grainy cityscapes of the great jazz era and images pertinent to the songs. It’s all very interesting – if you can take your eyes away from those flying fingers.

Boogie woogie disappeared as a force in music during the early 50s, but it survives in modern jazz and rock n’ roll. And it lives on in artists like Baldori, who has played with blues and rock legends from Bo Diddley to Chuck Berry during his 40 year-career, and Migliazza, a younger-generation musician who has learned from mentors such as Henry Butler, Ann Rabson and Mr. B. As long as these men can set the stage on fire, the music that is America’s greatest cultural contribution to the world will never die.