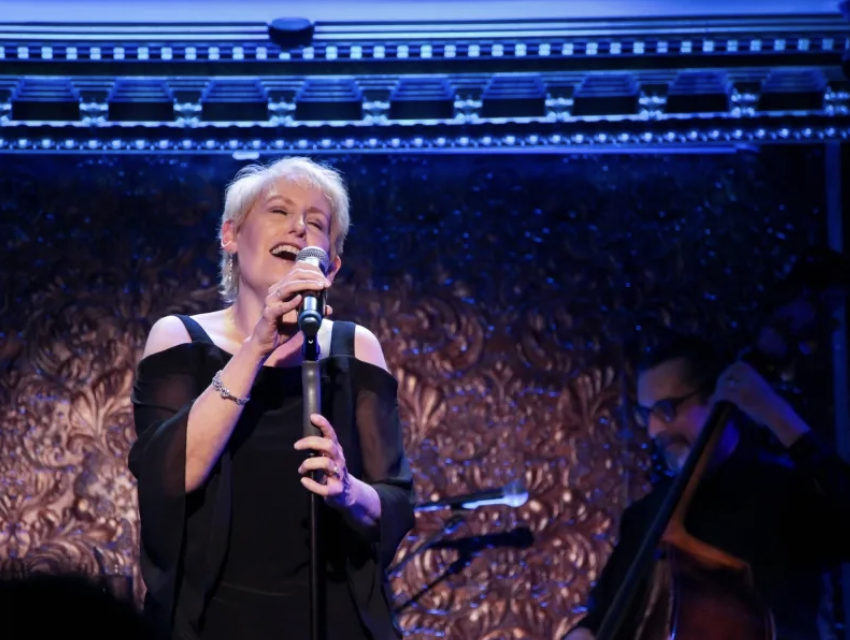 Welcome to my highly prejudicial review of Liz Callaway’s Sondheim show that ended a four-night engagement last evening at Feinstein’s/54 Below. I caught the last performance in my living room on my big screen TV via its live stream, which brought an unexpected level of intimacy achieved by camera closeups. Of course, I still wish I had been able to attend in person, because the gathering at this fabled underground venue set the standard for audience involvement and appreciation. Liz’s personal and professional connection to Sondheim and his music made this salute—just four months since his sudden death at age ninety-one—a profound one. In her ninety-minute set, she honored the great composer-lyricist with style and substance by way of the treasured contributions he brought to us over a long lifetime of theatrical creativity.

I’m prejudiced because not only am I a fan of Liz Callaway, but I have known her since the beginning of both our careers when we were just starting out. And it as if by magic she still boasts the freshness and innocence she did as a nineteen-year-old when I first met and worked with her. She most assuredly possesses what James Mason’s Norman Maine, in the 1954 A Star is Born, described to Judy Garland’s Esther Blodgett, when he told her: “You’ve got that little something extra that Ellen Terry talked about… she said that that was what star quality was—that little something extra. Well, you’ve got it.”

Oh, she’s got it all right. And what’s truly remarkable about Liz is that she has only gotten better over her now forty plus-year career. Her voice remains as crystal clear and unaffected as always, even singing her signature songs in their original key, sounding the same as she did on old cast recordings as far back as 1981. How she does it is a mystery, though using her voice properly is key, as well as a mother who was an expert singing teacher, which had to have been helpful.

Liz first captured Sondheim’s attention with Merrily We Roll Along and he continued to approve her being cast in various concerts and special events over the decades, reaching out to her personally on occasion as well. She got to play a few roles in Sondheim shows, but except for her chorus role in Merrily, never got to create a Sondheim character. She did, however, proudly introduce a Sondheim song in concert that few were familiar with back in 1983, when she sang “What More Do I Need?” from (at that time) his never produced earliest musical, Saturday Night. The story of Liz’s relationship with Sondheim was sneakily worked into the opening medley of songs that had her bouncing from style to style, singing men’s and women’s roles; all a delight to listen to. She also began her show right at the top by thanking the trio who shared the stage with her all evening. They are bassist Ritt Henn, and drummer Ron Tierno, led by Liz’s forever musical director, Alex Rybeck. Superb musicians all.

The work put into the writing of the show is exemplary as well. The casual patter effortlessly leading to starting a song almost before you realize it, and—boom!—there you are, listening to another gem. Liz’s husband, Dan Foster, both lent a hand in the script and directed the show with ease. The inclusion of their son Nicholas, to sing “Move On” late in the program with his mom, was an emotional highlight that produced the biggest ovation of the night.

Without listing all the Sondheim sung, the most incisive treats included “In Buddy’s Eyes,” which Liz claims to now understand in a way she never could while seated and listening at Barbara Cook’s feet during the four-day rehearsal period of the Lincoln Center Follies in Concert in 1985. She also chose another song to perform from Follies, with a mesmerizing take on Ben’s emotional wallop of a number, “The Road You Didn’t Take,” proving that what makes her so special is that she doesn’t embroider anything. That’s not to say each lyric isn’t stamped with what makes her singing so special; it means that she is always in service to the words and the music and doesn’t mess around. Period. Her wistful interpretation of “Now You Know,” a song she did eight times a week as part of the ensemble in Merrily, was insightfully filled with what she’s learned over the ensuing years. Even when she sings a throwaway line like “it’s not the garden but the stone,” included in the opening melody, it packed a punch. I don’t know how she does it.

I’ve never thought of Barbara Cook while watching Liz, but this time I did. The richness of her voice, improving with age, is reminiscent of how Cook developed her instrument over the years. Also, the commitment, the no-nonsense approach, the sheer clarity of everything…you get it. I could go on and on . . . and I am!

In her acknowledgements at the close, Liz brought it back to Sondheim. “How lucky we are to have lived in a time of Stephen Sondheim,” she told her audience. “He’s given me so much stuff to sing.* I’m never going to ever stop singing his music.”

And if I know Liz like I do, she will not break that promise.

* For Sondheim enthusiasts: “So much stuff to sing” is a lyric from “Our Time” from Merrily We Roll Along.