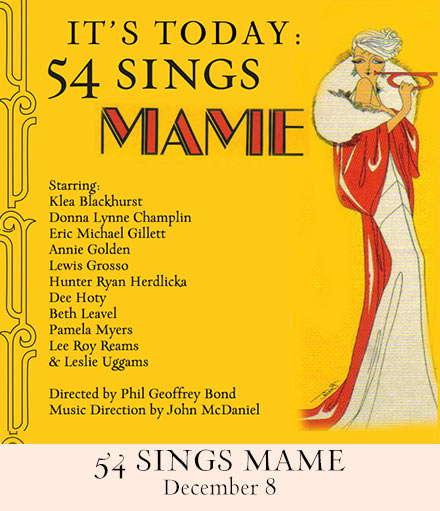 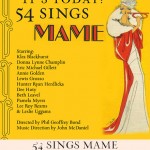 Phil Geoffrey Bond, who has produced and directed several award winning series, has a new series at 54 Below.  The first was “It’s Today:  54 Sings Mame,” a concert version featuring the songs from Jerry Herman’s great hit with superb musical direction by John McDaniel.  Sparing no expense, there was a great series of Broadway performers, including two Tony Award winners.  In between selections, Bond narrated historical information about the celebrated production and how often Angela Lansbury, the original Mame, had to audition for the role.  Throughout the presentation, there were great slide shows of historical stills, including lots of Rosalind Russell from the original play and movie and various potential Mames, including Judy Garland who wanted the part very much but the producers wouldn’t take a chance on her doing eight performances a week.  There were photos of successive Mames on Broadway:  Celeste Holm, Janis Paige, Jane Morgan and Ann Miller and Ginger Rogers in London.  I myself saw Angela in Philadelphia and in New York as well as Ann Miller and Susan Hayward in Las Vegas.

After an overture, Lee Roy Reams entered from the house exuberantly singing and dancing “It’s Today.”  Most of the Mame solos and duets were sung by the still strikingly attractive Dee Hoty and the humorous capers of Vera were socked home by Beth (“Drowsy Chaperone”) Leavel.  The fabulous Pamela Myers belted out “We Need A Little Christmas” with Reams, Lewis Grosso as young Patrick, Donna Lynne Champlin as Gooch.  Later on, Grosso was very effective singing “My Best Girl” and the special treat was when the older Patrick finished the song.  The older Patrick was sung by Hunter Ryan Hedlicka who had sung the song a cappella on CBS News that morning.  Hedlicka has one of the finest voices in the theatre today and it was a thrill to hear him complete that song.  Hoty also did a song that was cut in rehearsal that later found itself in the movie of “Hello, Dolly,” “Love Is Only Love.”  And Champlin, did an exemplary “Gooch’s Song.” Of course, the great treat was seeing Hoty and Leavel spar and sing with perfect comic timing “Bosom Buddies.”

The unquestionable highlights of the evening were the last two numbers.  Classically beautiful Tony Award winner Leslie Uggams, who had appeared on Broadway in “Jerry’s Girls,” a revue of Herman songs, and is a living legend herself, came on stage and did a stunning “If He Walked Into My Life,” so strongly acted and sung that the full house sprang up for a long, long standing ovation.

Bond then described the process of  Herman writing the title song in twenty five minutes and how the original staging was set up,  On stage came cabaret stars Scott Coulter, Karen Mack, Miles Phillips, Shaynee Rainbolt to sing the title song (Phillips doing most of the lead parts,) with eight other cabaret headliners on both sides of the room, a glut of riches that caused another great standing ovation!

The next two series will be “Smokey Joe’s Café” on Sunday, February 9 and “Side Show” in March.  I know that these will be packed with the same caliber of talent as “Mame”!  Reserve early.