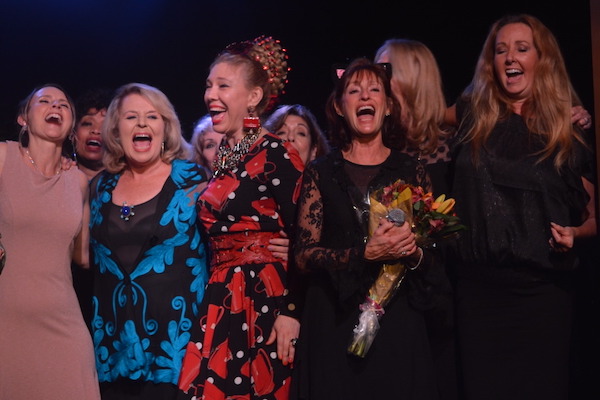 The over 40 (and many times 80 year young-uns) at Tomatoes Got Talent’s 7th Annual event,  proved over and over again. . . talent abounds at any age! I wouldn’t call this an evening for the “and she can cook too” kind of woman” (although some may be pretty good at that as well) . . . no, it’s about the many hidden and on-going desires to be up on a stage doing what is really soul-fulfilling; that thing that makes the heart beat a little faster and adds that special sparkle . . . singing and performing. So the evening was filled with a bevy of beautiful and talented women vying as contestants.

After an especially warm welcome from the Head Tomatoe, Cheryl Benton (founder and publisher), filling the audience in on what The Three Tomatoes stands for – the celebration of women as they age and their optimistic outlook on life – the evening was handed over to the Hostess with the Mostess, Randie Levine Miller to introduce the Contestants but not before she opened with a perfectly chosen song medley (accompanied by the evening’s Musical Director Paul Chamlin), “Gee But It’s Great to Be Here/Today I Love Everybody.”

The Judges (Broadway’s Tony nominee LeeRoy Reams, Tony Award winning Broadway producers Margot Astrachan and Ken Waissman) were ready and rarin’ to begin the process of listening and making final decisions who would be the finalists and ultimate winner.

And away we went with a spirited and appropriately costumed Susan Madon (straight from the Berkshires) singing “When You’re Good to Mama.” She was followed by a witty, pink-earred Robin Lyon-Gardiner with a clever and unusual parodied arrangement of “Memory” that had the audience in continuous laughter. Deanna Monaco (a cabaret singer) sang a full out “You Don’t Have to Say You Love Me.” Next up was a singing break to give comedienne Judith George the opportunity to talk about becoming a pen-pal to prison inmates and what that might entail. Lisa Kerr (who had founded a Zoom Karaoke group during the pandemic) followed with “Somewhere That’s Green” (Little Shop of Horrors).

An unusual act was pretty Susie Clausen (a real estate business woman, known by many as “Saxie Susie”) who, 5 years ago, decided to learn how to play the saxophone (named Sam) and also sing . . . and sing and play she did “If My Friends Could See Me Now.” A former Ms. Senior America Pageant participant, Carol Barnett sang her favorite 50’s song by The Chantels, “Maybe.”

Fireball Shana Kahn (who had been in the fashion biz) offered up “Bei Mir Bist Du Schon” followed by Kara Masciangelo singing Laura Nyro’s “Stoney End.” Then it was time for the twirler from Pensacola, Jo Jones, to give a hysterical rendition of “Older Ladies” showing off her black lace bloomers! Last on the contestant list was Russian Leyla Zaloutskaya (wearing a red flared dress with pocketbook pattern and matching little pocketbook earrings) giving a song and dance performance of her favorite “Mambo Italiano.”

Now it was time for the Judges to leave the theater, put their thoughts together and decide on the four finalists and winner. Not to be left without entertainment, the Hostess with the Mostess offered up “The Next Best Thing to Love/Good Thing Going,” followed by former Tomatoe contestant Merrill Stone singing “Comes Once in a Lifetime/Once In A Lifetime.” Another special guest, Corinna Sowers Adler, gave a Broadway worthy performance of “Back to Before”(Ragtime).

Roni Jenkins (daughter of and co-founder with the Head Tomatoe) conferred with the Judges and took the stage to announce the Finalists and Winner.

And here they are: Judith George, Lisa Kerr, Leyla Zaloutskaya and Robin Lyon-Gardiner.

The prizes ranged from gift certificates for designer clothes to skin care products with a grand prize of a 7-night Island Resort vacation in the Grenadines.

And the Winner is . . . . . Robin Lyon Gardiner! Congratulations to all the contestants who kept the audience well entertained and to the finalists and especially the winner.

Photographs are by Maryann Lopinto with special thanks to Shannon Epstein on sound & lights, Beck Lee at Media Blitz, Michael Stever on video and Peter Martin and Michael Doane of the Triad.