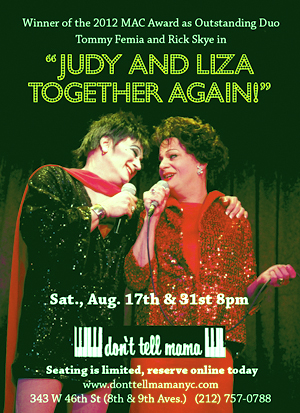 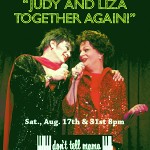 “JUDY AND LIZA TOGETHER AGAIN!”

Teaming up for an evening of “Just POW!”, these MAC and Bistro Award winning performers pull out all the stops, singing classic solo’s, parodies, duets and just plain whooping and hollering by the greatest mother/daughter team in show biz history in “a high energy evening with an abundance of laughs!” (Edge).

Rick Skye is a multi award winning performer, who has written a string of outrageous comic revues including “The Flip Side of Neil Sedaka” (Bistro Award winning performance), “MaCabaret – a tabloid fable”, “The War of the Mama Roses”, “It’s Madame with an E” (performed with his indefatigable co-star – the one and only Madame), “Barbra and Liza LIVE!” (Leicester Theater and Dublin Theatre Festival) and the International hit – “A Slice O’ Minnelli” (MAC Award – Best Impersonation) which has enjoyed successful season’s in Covent Garden, at the Apollo Theatre in London’s West End and at the Dublin Theatre Festival where he received the Award for “Best Achievement in Performance”.

Tommy Femia is a 7 time winner of the Manhattan Association of Cabarets and Clubs (MAC) Award for his brilliant portrayal of Judy Garland in “Judy Garland LIVE!”, now in it’s 20th season at don’t tell mama. He has also starred in “Whoop-de-doo”, “I Will Come Back” and, most recently, “Norma Does Men”. The Sunday New York Times did a front page cover story on Tommy Femia in 2011 entitled “The Boy Who Became Judy Garland”.

“Judy and Liza Together Again” premiered at The Rising Action Theater in Ft Lauderdale to great acclaim and marked the first pairing of these two remarkable talents.