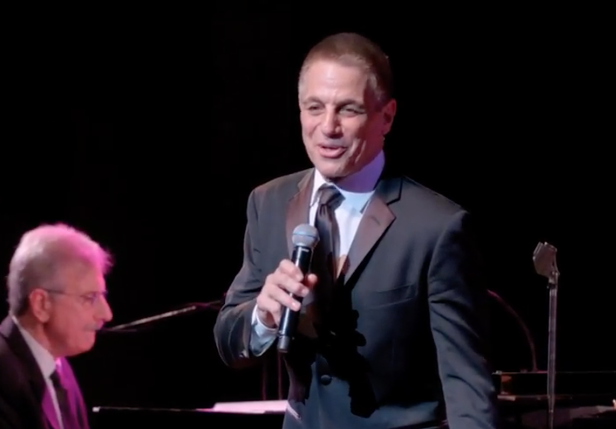 Geniality is an art displayed in fine form by the compellingly winning cabaret act Tony Danza brings to Feinstein’s/54 Below this weekend.  Danza is eternally young, with a young mischievous grin.  He’s happy to be living in New York, walking to work, shoulder brushing against fellow walkers as he carries his tux and tap shoes.

Danza, former boxer turned actor and occasional cabaret singer, follows his own advice; honors his heroes; taps a bit; strums a ukulele; and generally has fun dipping into American standards while telling stories.  It’s an entertaining and warm evening– much like the man himself.

“A microphone, tuxedo, and spotlight – this is the Italian fantasy,” he comments while acknowledging the beauty of 54 Below, pushing the scampi, and calling the club “the Leonard’s of Great Neck of cabaret.”  This a sly metaphor to the quickness of the act turnover with two, sometimes, three a night; just as the Long Island catering hall pushes family through cocktails to the big room with multiple events at once. Danza sings with enthusiastic grit, finding the underlining drama of each song, using his acting skills to sell his own singing.  He’s grateful to be here, happy to entertain, and creates the intimacy that he’s just singing to you.  He references family (his uncle, a daughter and her “friend” were in the audience) and especially his mother.  Here he is especially youthful; talking about how he couldn’t go to play until the house was clean they’d listen to Sinatra on the radio.  When Sinatra appeared on “Who’s the Boss,” he flew his mother out to meet him…though he didn’t need a plane  And the Chairman of the Board didn’t disappoint.

Danza delivers respectful turns of songs like “It Was A Very Good Year” – feeling mournful and pungent. He croons with efficiency, finding the grit and poignancy of “Angel Eyes” and a smoothness to “How Little We Know.”

Respect is very much on display, as he credits the creators of each song.  He warmly reminisces about his relationship with Sammy Cahn and Billy Wilder.  This respectful wisdom is part of Danza’s underlining charm, just as pulling entries from his Thought of the Day calendar, or recommending that you learn to play the uke.  He’s fully at home on the stage and having infectious fun…especially leading the audience on a sing-along to “Love Potion #9”and a delicious turn of “If My Friends Could See Me Now.”