TONY YAZBECK AT 54 BELOW 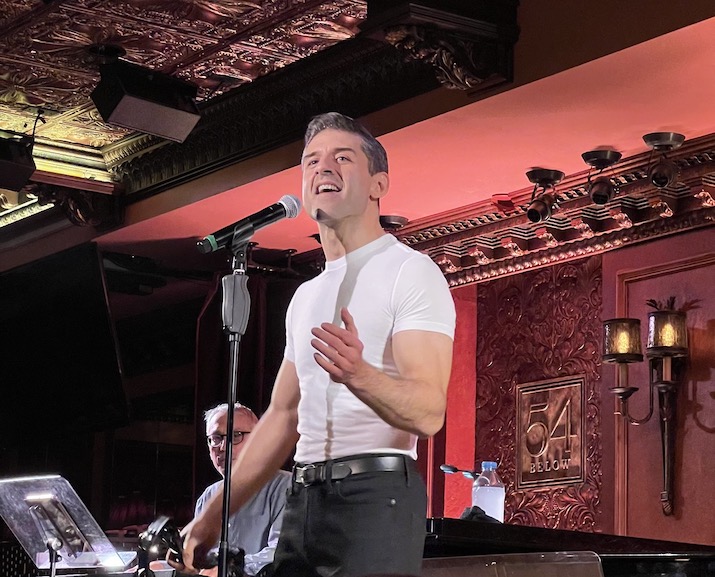 Tony Yazbeck’s Broadway career dates back to when he was a newsboy in the 1989 production of Gypsy that starred Angela Lansbury. Eighteen years later, he returned to the musical when he played Tulsa in the Patti LuPone revival. All in all, he’s appeared in eleven Broadway shows and, at the ripe old age of forty-three, bears the credits of a show biz veteran. At 54 Below, in the first of two shows January 9th and 10th, Yazbeck brought his singing, acting and even dancing skills to its tiny stage. If you saw him as Gaby in the 2014 revival of On the Town, you would have first-hand knowledge of his triple-threat capabilities. With the set list he has devised for his 54 Below show, the offerings of new and classic songs make for a variety of dramatic musical challenges.

In a bold move, Yazbeck kicked off the evening on a solemn note, seemingly in a troubled state. Pensively moving his way onto the stage to the classical strains of Debussy’s “Clare de Lune,” he seated himself in a chair and changed out of his boots and into tap shoes. He then approached the microphone and sang a medley of songs in which he laid himself on the line, vulnerable as a wounded animal. The four titles tell the story: “The Last Man on Earth,” “Frail,” “Fade to Grey” and “Into the Light.” Calling it his “Recovery Suite,” Yazbeck would go on to spend the evening  if not joyfully celebrating his newfound sobriety, then meaningfully contemplating it. His gratefulness for a new shot at finding his own inner peace and happiness is commendable, if at times keeping the show from becoming airborne. Though it seemed he was beholden to a script, there were moments of meandering. He still has a ways to go in maintaining a tighter grasp on the personal information he’s willing to impart.

It wasn’t until halfway through his set that he cut loose with the dancing for which he is most noted. Ferociously tapping and singing his way through George and Ira Gershwin’s “I Can’t Be Bothered Now,” first made famous by Fred Astaire, Yazbeck was a total delight. With no drum set onstage, he was able to have the space to offer his masterful tap, much to the enchantment of the audience. Some of the stories he told were interspersed with tap, something he says he does in his most private moments when dealing with undue pressure or even anxiety. It’s an excellent device and one he might consider introducing near the top of the show and then, without comment, continue to do so through the evening. Punctuation, if you will.

His “Oh, What a Beautiful Morning” was enhanced by his musical director and pianist Jerome Korman’s expert and sensitive playing. Korman also played a fine foil in frequent off-the-cuff remarks that kept Yazeck (literally) on his toes. Noah Chase, playing both guitar and mandolin was a lovely addition. Yazbeck himself got in on the instrumentation with a bout of bongo playing and the tossing of a tambourine.

Other highlights included Stephen Sondheim’s “Not While I’m Around,” Billy Joel’s “New York State of Mind” and Joni Mitchell’s “Both Sides Now.” His rendition of “Pure Imagination,” the wonderous song from the imagination of Leslie Bricusse and Anthony Newley’s film score for “Willy Wonka and the Chocolate Factory,” was magical.

With his encore, Lennon and McCartney’s “Blackbird,” Yazbeck lovingly displayed what in his earlier rendition of Ira Gershwin lyric to “I Can’t Be Bothered Now” joyfully stated: “I’m throwing off the bars that held me down.” Gleefully, his launch of carefree abandon that he’d mostly kept in check , was tossed aside, performed in such a throwaway fashion that it was a welcome reminder that an evening crafted around a single theme still needs to remain buoyant.