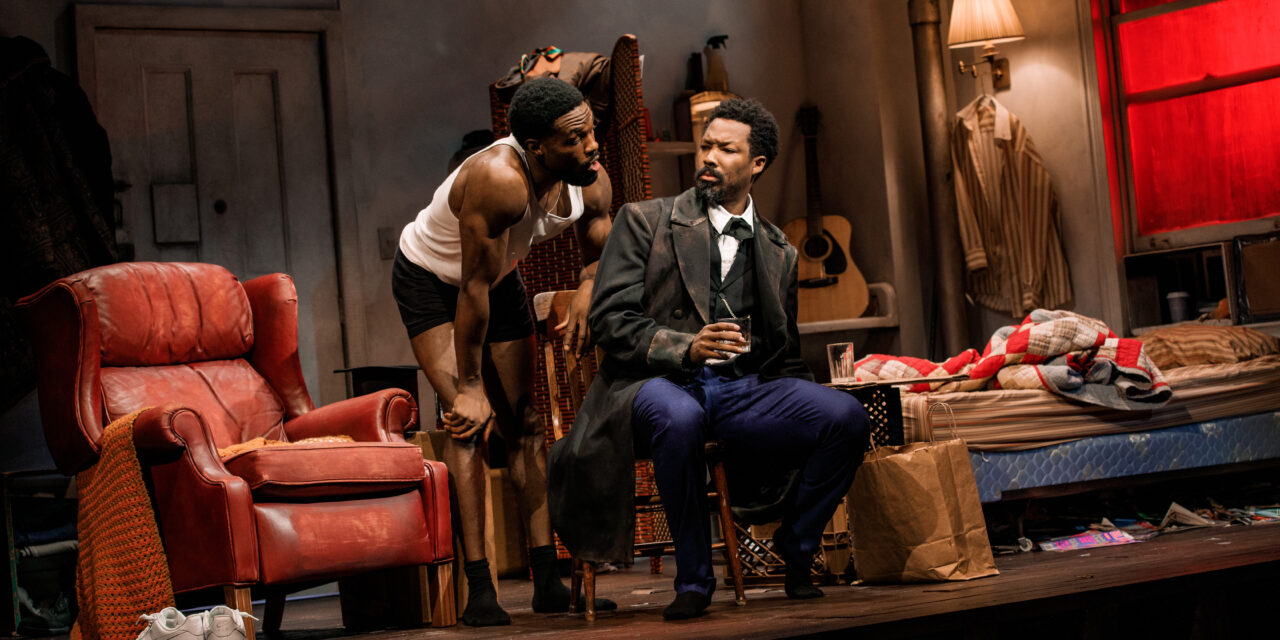 Brace yourself for shock waves at the Golden Theatre on Broadway!

Topdog|Underdog, the devastating 2002 Pulitzer-prize-winning American tragedy by Suzan Lori Parks, is getting an electrifying revival, featuring two performances that will surely be praised as among the most exciting of the current season.

The story of two brothers – emanating from Cain and Abel in the Bible – has been a favorite among playwrights.  Athol Fugard dramatized it in The Blood Knot – so did Eugene O’Neill in Long Days’ Journey into Night, Arthur Miller in Death of a Salesman, and Sam Shepard in True West, to mention a few among many.

Actually, Parks’ brothers are closer to the Romulus and Remus story – namely, of two brothers orphaned, abandoned and adrift in a hostile world.  These brothers live in a squalid one-room apartment in an unnamed city (presumably New York), and from the moment you hear their names – Lincoln and Booth – you know there’s trouble ahead.  (Their father named them “as a joke,” Link explains to his younger brother).

In six lacerating scenes, spanning several days, we find these two young Black brothers in desperate financial straits. Booth (unemployed) is a petty thief who stays at home and practices tricks, longing to become a three-card-monte street scammer.   Lincoln (aka “Link”) works as an impersonator of Abraham Lincoln in a penny arcade, where daily he dons a costume (which he must pay for himself), puts on white face, and gets “shot” by eager customers.  He’s just been evicted by his (off-stage) wife, Cookie, and has moved in with his brother temporarily. In return, Link (an expert three-card-monte player) offers to train his hopeful brother.

One scene after another raises hopes that are soon dashed.   In a darkly comedic scene, Booth enters his dingy dwelling after a stealing binge, and strips himself of two new suits, ties, shirts, and shoes which he and his brother can wear.  “I stole generously!” he boasts. Booth plans to dress up and invite his girlfriend Gracie (also an off-stage character) to dinner, and he manages to steal china, silver, and champagne for that occasion as well.

From there on, the play plunges into a dangerous downward spiral.  On the night of the dinner, Link arrives on the scene to announce that he’s been fired from his job and replaced with a wax dummy.  Booth is too preoccupied to empathize – it’s 2 a.m. and Gracie (due at 8 p.m.) still hasn’t arrived.  To distract themselves, the brothers engage in a game of three-card monte, with Link dealing expertly.

As they play, devastating family secrets are revealed.  Both parents had deserted their sons – first the father, then the mother (when the boys were 13 and 10 respectively).  Each parent had left a $500 inheritance – the father for Link, and the mother for Booth.  While Link has already spent his inheritance, Booth guarded his $500 until now, when, devastated by failure, the desperate Booth bets his entire amount on the card game.  The results?  (No spoiler – yours to discover).

Two-character plays succeed on the chemistry of the actors.  Corey Hawkins (Lincoln) and Yahya Abdul-Mateen II (Booth) both give thrilling, charismatic performances as two brothers tied to each other in a blood knot, unable to escape the destiny indicated by their names.  Each of their characters is complex, unstable, and unpredictable, and these actors play their roles with complete command.  There are stunning moments – including Mateen’s brilliant card hustling and Hawkins’s frightening transformation toward the end. They both elicit our deeply felt pity – the feeling that Aristotle names as the essential outcome of a tragic story.  Their duet is as perfect as ever I’ve seen one onstage, in the strength of their characterizations, in their interactions, and in the rise and fall of their intertwined fates.  Directed with brio by Kenny Leon, the stage is alive every moment of this two-and-a-half hour production, and the hard-driving rap music played pre-show and between the scenes intensifies the charged atmosphere.

Like Long Day’s Journey Into Night and Death of a Salesman, Topdog|Underdog is an American family tragedy, articulated in Parks’ unique colloquial dialogue with a mesmerizing rhythm all its own.  At the play’s center is the icon of Abraham Lincoln that appears throughout Parks’ oeuvre –  the alleged savior of Blacks who turned out to be nothing more than a “wax dummy” in an arcade.  Booth and Link are tragic victims of an American mythology that has marginalized them and ultimately orphaned them (just as their parents had done).

Topdog Underdog is the first of three highly visible productions by Suzan-Lori Parks to open in New York this season – to be followed by Plays of the Plague (an account of the pandemic) and The Harder They Come (a musical), both at the Public Theater.  This places Parks centerstage in the 2022-23 season, where the dazzling variety and virtuosity of her prodigious work can be admired.  It’s clear that this prolific writer is at the top of her game, with more to come.

.“You think we’re really brothers?” Link asks Booth before the denouement.  “I think we’re brothers,” replies Booth.    In the play’s published introduction, Parks writes: “This is a play about family wounds and healing.  Welcome to the family.”