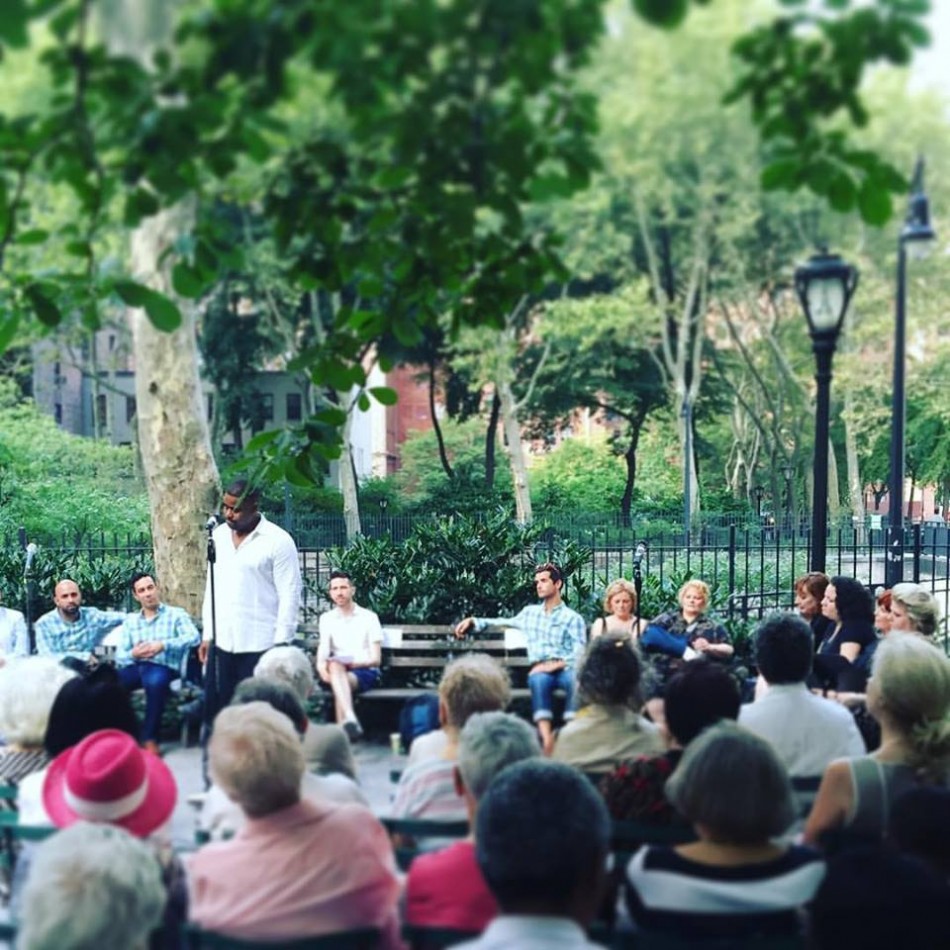 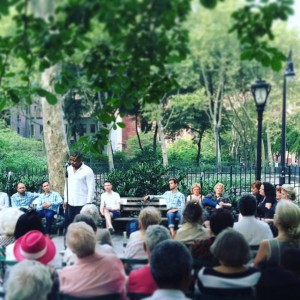 Tudor City Greens Concerts in the Park produced by Raissa Katona-Bennett and her husband Dr. Garrett Bennett is a free event presented on certain Wednesdays in the summer. The last of the series was presented September 2 to a large crowd and it was a nice balmy evening. Although Katona-Bennett and Dr. Bennett were not present (they were on an international trip), the event was overseen by regular Tanya Moberly and a special Guest host, Barbara Porteus. The musicians this evening were Bill Zeffiro, Matt Scharfglass, Jeff Cubeta, Ian Herman and Tracy Stark, all major award winners (and we learned during the evening that Scharfglass is in the Rangers band.)

Zeffiro opened with a special song about the great event itself. On a later solo spot, he also sang and played another New York appropriate song about it being the best place to be when you’re depressed late at night. Then Porteus, with Cubeta, sang “I’ve Got the World on A String.” Porteus has extraordinary lyric sense and great phrasing. Later, she got everyone in the crowd to sing along with her on the chorus of Joni Mitchell’s “Circle Game” – a wonderful moment of the evening.

Amy Wolk described the movie “White Christmas” and channeled Rosemary Clooney singing “Love You Didn’t Do Wrong By Me” with all the Clooney moves in an exaggerated funny way. Later, she did a very funny Alan Menken song, “I Want To Be A Rockette.”

Broadway star Bernard Dodson, accompanied by Stark, belted out his “Sweet Smell of Success” show stopper “Laughing All the Way to the Bank.” Then he spoke of his personal relationship with Marvin Hamlisch, having watched the tryout of “They’re Playing My Song,” getting the composer to sign his songbook of the score and the CD when they met the first day of “Sweet Smell of Success.” He spoke, very movingly about being honored to perform at his Carnegie Hall tribute, two songs, “Fallin‘” and “They’re Playing My Song,” which soared through the soon-to-be autumn air. His second appearance was a tribute to his idol, Sammy Davis, Jr., with a moving rendition of “Mr. Bojangles,” with appropriate movements. Dodson also hosts an improvised program called “Mad Libs” which appears at the Triad with superstar guests like LaChanze and other major stars who take title suggestions from the audience and then create songs with those titles. 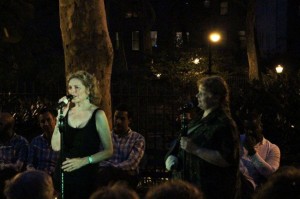 Carole Demas, looking younger than springtime, sang a great original song, that went “Shine, Firefly, into the Darkness” and introduced the songwriters in the audience. Later, she joined forces with Sarah Rice, because they had both played Luisa in “The Fantasticks” many moons  ago. When Rice had to leave to have her tonsils removed, the producer called Demas, who was ten years older, to come back and do the part. Her original costume was still in the basement. They both did a touching “Try To Remember.” Rice, with a broken arm from a household accident, did a wild Cole Porter rarity “Cuckoo” with lots of great soprano high notes. She told me it was a song written for Bea Lillie. Rice will appear at the “Gone But Not Forgotten” tribute to Madeline Kahn on September 12 at the Metropolitan Room.

Forte (a group formerly known as The Broadway Four) alternate singing lead part as the others sing countermelodies. They did a great harmonic arrangement of several Cole Porter songs which ran the gamut from “Ca C’est L’Amour” to “Let’s Misbehave,” and “What Is This Thing Called Love.” Their second selection, a cappela, was “Every Time We Say Goodbye.” Forte is taking up residence at the Metropolitan Room beginning September 20.

Lorinda Lisitza did a wild Brechtian comic song about murdering her rival by shoving her down a full staircase so she was dead at the bottom of the stairs. Great actress that she is, Lisitza deadpanned the number with great skill and the audience roared.

Moberly did one of her special numbers “If I Were” and will be repeating her “Songs I Feel Like Singing” series beginning October 23 at Don’t Tell Mama.

There were raffle tickets of Cds and tickets to the Mabel Mercer Cabaret Convention and free iced herb tea supplied by a sponsor. The sound and lighting were expertly executed by Stuart J. Allyn.