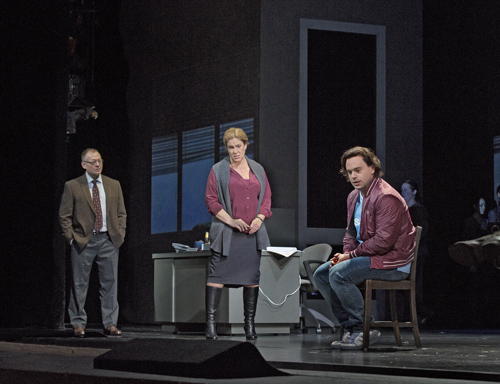 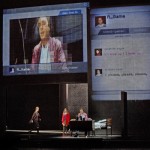 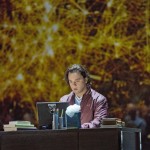 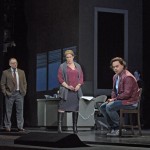 The Metropolitan Opera enters the digital age with Nico Muhly’s Two Boys, a somber and sad study of loneliness in cyberspace. Ironically, this piece revolving around Internet chat rooms is already somewhat of a period piece. The young woman sitting next to me giggled aloud and said “Remember that?” as the characters anonymously hooked up in the pre-Facebook-and-Twitter world of 2001. This was after I had to ask her to stop texting on her I-phone, BTW. Despite the antiquated technology, Two Boys resonates with a melancholy beauty as it depicts the universal yearning for a match in an isolated environment.

Derived from actual events, the plot begins like an episode of Prime Suspect. In a bleak industrial English city, Jake, a nerdy 13-year-old boy has been stabbed by 16-year-old Brian. Detective Anne Strawson has been assigned the case, but she doesn’t want it. “No juveniles,” she sings. It’s revealed she gave up a baby for adoption and he would be the same age as Brian. During the investigation, the computer-illiterate Anne discovers Brian is almost constantly online, “chatting” with a bizarre cast of characters including Jake who claims to have hacked into government files, Jake’s worldly teenage sister, the family’s menacing gardener Peter, and a mysterious aunt Fiona who might be a professional spy. As Anne is drawn into this seductive, shadowy world, we discover she is just as needy and alienated as Brian and Jake. She lives with an invalid mother, drinks too much, and never dates. Anyone with the slightest degree of familiarity with computers should be able to guess the outcome, but the work is still gripping in its compassionate portrayal of desperate souls seeking love, a staple of opera for centuries.

Muhly’s lyrical score parallels both the drab world of harsh reality and the fantasy atmosphere of the net as does Barlett Sher’s imaginative staging. When Brian enters the chat rooms, he’s in his bedroom, illuminated only by his laptop while Michael Yeargan’s set opens up and dozens of chorus members appear representing the other users seeking companionship. Dancers perform Hofesh Shechter’s intricate choreography, contorting their bodies in a desperate grasping for connection through the ether while the singers vocalize cyberspeak pleas like “Are u there?” and “What are u doin?” Playwright Craig Lucas’s libretto seamlessly combines these abbreviated messages along with the incomplete sentences of everyday dialogue and poetic musings on the wispy nature of computer-inspired bonds. “Ghosts in the machine,” sings Detective Strawson as she contemplates the empty world of the two boys and the one she gave up.

In one particularly haunting sequence, reality and its computer equivalent overlap as the stabbing is played out with live actors and the video of the incident is simultaneously projected over them. The real boys seem overwhelmed by their huge screen images as if the digital world had consumed them.

Mezzo-soprano Alice Coote captures the sad ache of Alice’s isolation with her lovely tones. As Brian, Paul Appleby is a bit too mature to be entirely believable as a teenager, yet his soaring tenor conveys the insecure yearnings of this confused kid. Boy soprano Andrew Pulver is perfectly cast as the mysterious Jake, his sweetly boyish voice hiding the complex passions within.

This eerie and stunning new work, now in its American premiere after a previous production at the English National Opera, addresses gay adolescents, voyeurism, and the void of modern life. Hopefully, it will inspire more operas on contemporary themes.