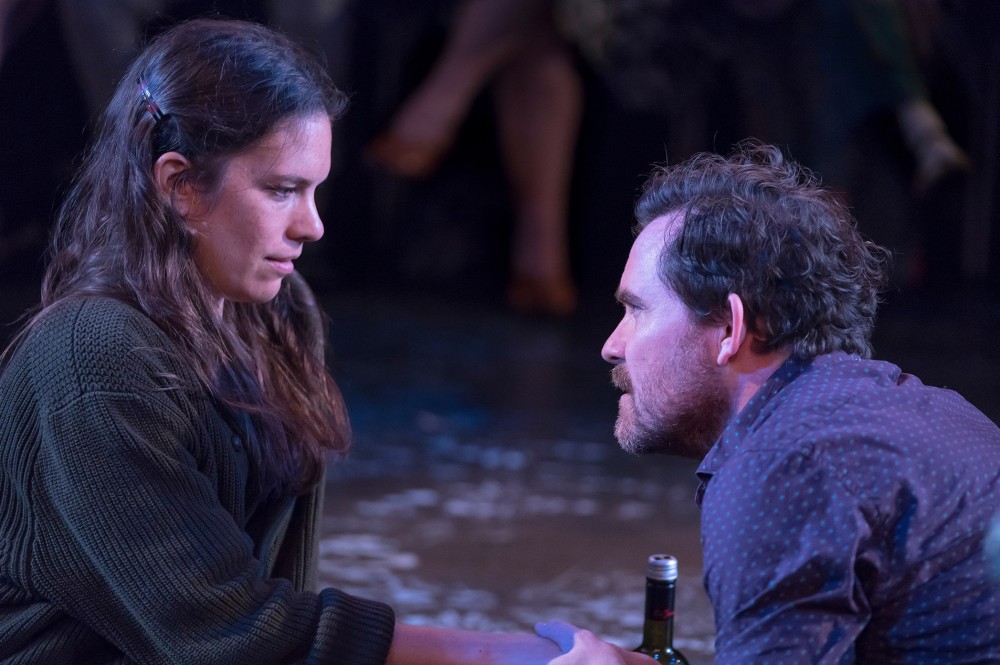 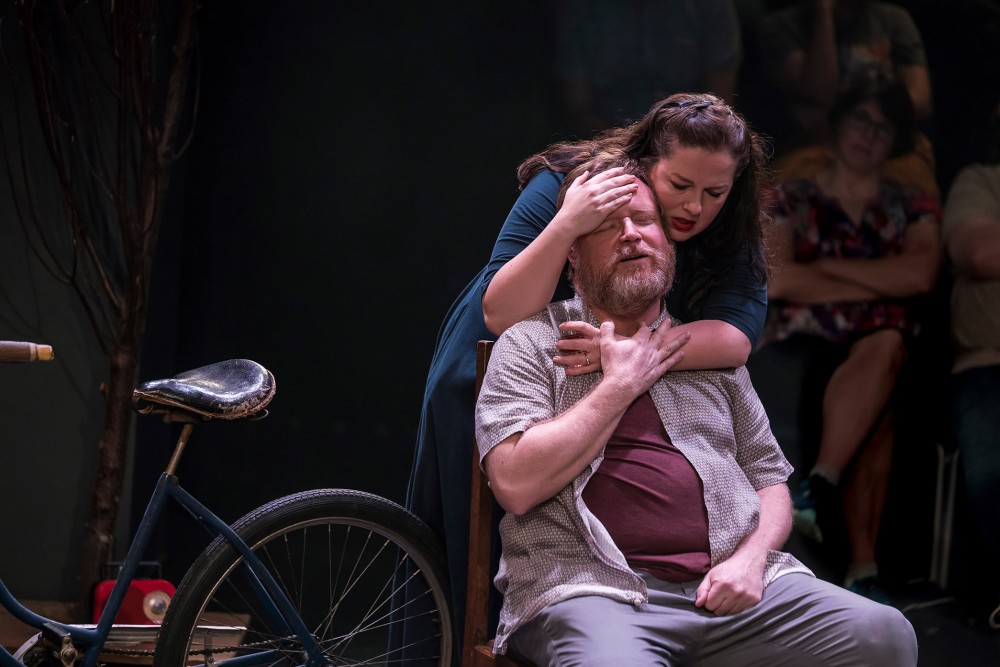 Bedlam Theater Company, for reasons that do not become apparent during the play (or after, in contemplation), has combined Chekhov’s Uncle Vanya with Shakespeare’s Romeo and Juliet in what they’ve sophomorically titled Uncle Romeo Vanya Juliet in a new production playing through October 28 at The Mezzanine Theatre at A.R.T./New York Theatres.

Yes, they are both plays that dwell in unrequited love, but that’s about as deep as the connections go—to ascribe more is wishful thinking. Uncle Romeo Vanya Juliet (URVJ)—directed by the company’s otherwise brilliant founder and artistic director Eric Tucker and adapted by Kimberly Pau (the Uncle Vanya parts, anyway)—is as mangled as the title. While the play is mostly Uncle Vanya, with sections repeated for emphasis and effect,the first act is interspersed with a couple well-known Romeo and Juliet scenes, some of Romeo’s better known speeches, as well as Malvolio’s obscure (for today’s audiences) meditation on Queen Mab; in the second act, Juliet is the featured Shakespearean. To be truthful, it would have been more interesting to see Bedlam’s interpretation of Romeo and Juliet, especially with Edmund Lewis’s passionate, wide-eyed monologues. Lewis has been a treat in every Bedlam production and continues to be so, despite the production’s deficiencies. 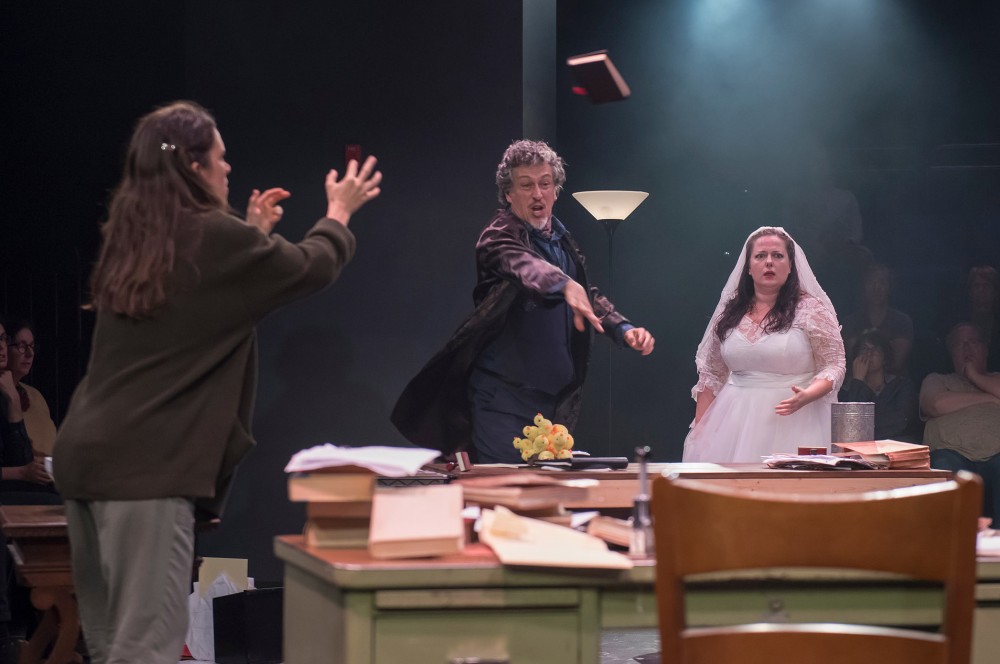 URVJ can only be described as puzzling. And simply not up to Bedlam’s standards. Since its inception Bedlam Theater Company has been hailed for its innovative and unique approach to classical theater. Among their earliest work (2012-14), their excellent Hamlet and St. Joan in repertory with the same four actors, wowed critics and demonstrated the company’s ability to make an audience look at a play in ways—quite enjoyable ways—they never had before. Their Sense and Sensibility (in several iterations from 2014-18) garnered award nominations and accolades. URVJ, however, simply doesn’t live up to the company’s catalog.

The play’s biggest shortfall is that it simply doesn’t come off as anything more than avant-garde posturing. As a standalone play, particularly for anyone who’s not intimately familiar with both Uncle Vanya and Romeo & Juliet, it makes little sense. For example, as Sonya, Astrov and Vanya are discussing Serebryakov’s long writing tenancy, the scene, in a second-take (repeated scenes are a device Bedlam is known for, often to great effect; and here in the first take the scene is traditional) is interrupted by Tybalt from Romeo and Juliet:

Astrov: How long will they be here?

Vanya: A hundred years. If we last that long. Speak of the devil.

Tybalt: What, art thou drawn among these heartless hinds?/Turn thee, Benvolio, look upon thy death.

Were this a comical collision of two plays, played for laughs in a Monty Python-type sketch about two companies fighting over a double-booked theater space then, perhaps, it might work. But probably not. And it certainly doesn’t work as a straight scene. None of the intersections of the two plays do, quite frankly. And it serves to dampen both the original pieces. Rather, it feels like pompous, intellectual meddling by a company that’s bored with traditional theater and the odious project they’ve undertaken. 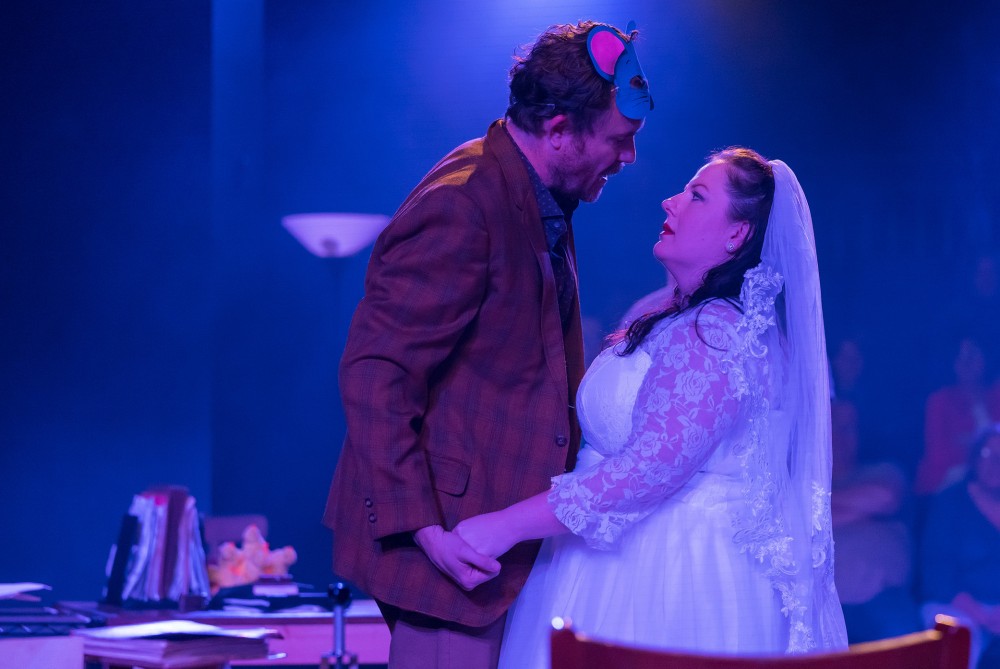 Cast members (all of whom play multiple roles) like Lewis as well as Zuzanna Szadkowski hold their own balancing multiple roles, but others exhibit lassitude and seem not deeply immersed in the production, which is pretty much how the audience feels. John McDermott’s eclectic collection of sets—from an opening forest setting with a lone, half-inflated helium balloon lolling near the ground to a mid-twentieth century office setting that has little to do with the actual scene—might have been intriguing in a contiguous piece. But here it seems as scattershot as the rest.

Though URVJ does not live up to Bedlam’s outstanding standards, they are a company that takes risks and part of risk taking is failure. It’s a bit of a letdown, but it does not spoil the adoration their fans will continue to have for them. Bedlam is not just good, but great for New York theater, and it’s a virtual certainty that they will return with works as remarkable as those we’ve seen in the past.